They Held Many Shields 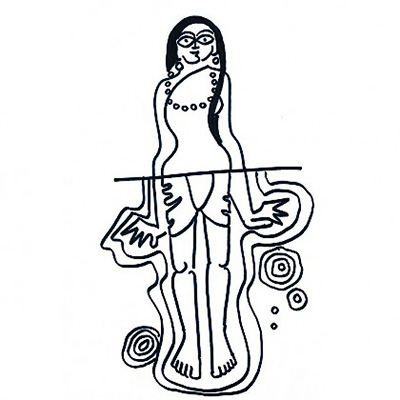 Once upon a time, there was a monk in a Buddhist monastery who approached other monks to ‘def­ile’ (dusatha, in Pali) him. He probably meant sex, for in Buddhist lore, sexual desire was seen as contaminating one away from the path of dha­mma. The monks refused and so he approached the mahouts or elephant-grooms who lived in the vic­inity of the monastery. The mahouts obliged, but after the act started grumbling and speaking ill about the monastery and its residents. The monk was identified as a pandaka and it was decreed that a pandaka should not be ordained as a monk, owing to his inability to restrain his sexual urges. In fact, some went to the extent of saying that the pandaka can never attain enlightenment.

This story comes from the Vinaya Pitaka, one of the earliest books of the Buddhist canon, listing rules for monks and monasteries and attributed to the Buddha himself. But it has undergone much revision due to oral transmission and several editors.

Further, the Buddhist canon does not presume a world of two genders: male and female. There is reference to many kinds of transgender persons located in the spectrum of gender: the man-like woman (vepurisika), the sexually ambiguous (sambhinna), the androgyne (ubhatovyanjanaka). This reveals, at the very least, an awareness of queer people, certainly transgender persons, and probably effeminate gays and masculine lesbians.

Buddhism had no problem with their existence, but assumes that their libido and lack of sexual restraint is greater than that of heterosexual men (as many still do today). Similar discomfort is revealed in matters related to women, who were seen by anc­ient Buddhist writers as having greater sexual urges than men (quite unlike what most people believe today). Eventually, women were ordained, but were lower down in the hierarchy and segregated from men. The queers were firmly kept out.

In Thailand today, the word pandaka is translated as ‘kathoey’ and is used for cross-dressing homosexuals and transgenders, who are very much part of mainstream society, though again not quite welcome within the monastic order. This word is closely related to the word ‘kothi’, used by cross-dressing homosexuals and transgenders of India, to identify themselves. Perhaps the word either spread from India to Thailand or from Thailand to India a thousand years ago when there was a thriving sea-trade bet­ween India and Southeast Asia.

In ancient India, sex was not bad. It was a pleasurable activity (kama) that often distracted people from doing their social duties (dharma), that could be a source of income (artha) for courtesans, and a distraction for monks who sought liberation (moksha). Sex was not just an act between man and woman. There is an open acceptance of third gender indicated by the presence of a wide variety of words in Sanskrit and Pra­krit and regional literature that spe­aks of men who are not quite men and women who are not quite women, and a whole div­erse range of beings. Sex with these bei­ngs cannot be hetero-normative. So along with diverse gender, there is acknowledgment of diverse sexualities.

In Sanskrit literature, there are references to tales of women turning into men–the most famous is Shikhandi in the Mahabharata. Bhisma refuses to see him as a man and Krishna insists that he is man, though he was born with a woman’s body and only after marriage, thanks to the intervention of a yaksha, managed to acquire male genitalia. Then there is Yuvanashva, the king who drinks the magic potion meant for his wives, and gets pregnant, and bearing a child called Mandhata, who he cannot nurse as he has no breasts and so no milk to offer. Indra comes down to earth and cuts his thumb and lets the infant Mandhata drink his blood (the blood of gods is made of milk, we are told). Thus Mandhata’s mother and wet-nurse are both men. It is not uncommon in art, to see the Goddess represented as a peacock (as in Kapaleshwara temple in Chennai), not peahen. And to see motifs showing two peacocks dancing like lovers, both joyfully displaying their plumage.

Both Buddhism and Hinduism fought to gain mindspace in the Indic mind. Buddhism was uncomfortable with transgender persons in monasteries but had no issues with them in mainstream society. Hinduism had issues with them in mainstream society but accommodated them in temples, which is why there are many traditions in India where transgenders are closely linked to deities: so there are the Kinnaras and Mangal-mukhis of north India who worship Bahucharji, the Jogatas of Belgaum region who worship Yellamma, and the Aravanis of Tamil Nadu who see themselves as bride-widows of Aravan, a form of Shiva, who was Arjuna’s son by a Naga princess. They are part of local fertility rites. In the recently concluded Kumbh Mela of Ujjain, the Simhastha, a kinnara akhada was established, a transgender mahamandaleshwara was chosen, and hundreds of people thronged to get barkat (blessing) from them.

With the arrival of Islam, Buddhism waned from mainstr­eam Indian society while Hindu society became more puritanical, with the rise of Hindu monastic ord­ers (akhara) who saw themselves as defenders of Hinduism. Increasingly, all things sexual were seen as a perversion or the vulgar indulgence of the rich. The culture of employing castrated men popular in Persia, Central Asia and China was adopted in India. This gave rise to the hijra community, who were invited to weddings and childbirth festivities to ward off the evil eye, and employed in harems, not yet ‘criminal tribes’. In fact, most hijras in India today are expected to embrace Islam and have Muslim names, though worship of Hindu and Christian gods and saints is permitted. The status of these hij­ras declined with the arrival of the British.

Clearly, Indic culture (a mix of Buddhist, Jain, Hindu and Islamic ways of being) saw transpersons as part of nature’s diversity. Were they tolerated in society? We must be careful of such a question, for the books we refer to, the Dharmasutras and the Dhar­mashastras of the pre-Islamic era, are not canonical, like the Bible or Quran. They tend to be misogynist and casteist–hardly benchmarks for a modern civil society. We cannot expect them to be highly acc­ommodative of queer genders and sexualities, as their primary aim is to reaffirm and reinforce the merits of a rigid hierarchical society. Further, traditional Indian scriptures continually say that laws are fluid and must change keeping in mind three things: desha (place), kala (time), patra (people). What matters is dharma–which Chanakya acknowledges is that which prevents matsya nyaya (jungle law) from taking over society. With this in mind, all of us have a choice, no matter what the courts decide: accommodate in our hearts the diversity of genders in nature, or suppress them based on views of a few celibate monks and puritans, who either out of monastic discipline, or envy, or fear of pollution, oppose all kind of sexual expression.

This article is also listed under Jain, Mahabharata