There Is No Yagna Without Yoga 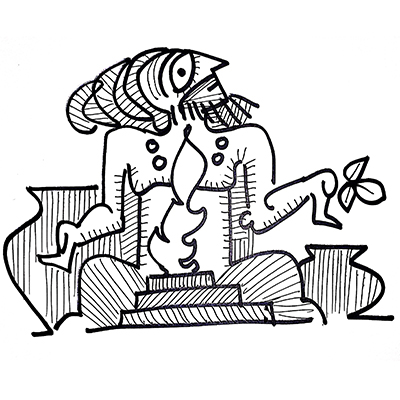 In the Vedic world, to practice dharma meant performing yagna. Yagna was translated by European Orientalists as sacrifice. But in sacrifice, you give something to appease a deity who needs nothing from you but your loyalty and obedience. In yagna, you exchange. You give in order to receive. You feed a god and the god is obliged to feed you back. The assumption here is that the god is hungry. He needs praise and food. When he gets what he wants, he gives what you want.

Exchange is an indicator of humanity, for it shows empathy for the other’s hunger. This act of feeding others, and letting others feed you, is also karma yoga, the yoga of action, described in the famous Hindu scripture Bhagavad Gita. For in yagna, you have control on the giving, but no guarantee of receiving. You need to trust that those whom you feed will eventually reciprocate. More importantly, their failure to reciprocate will not shatter your faith in humanity.

Bhagavad Gita is part of an epic Mahabharata where hundred brothers with eleven armies fight five brothers with seven armies over property. The strong refuse to share their wealth with the weak, even though the weak are family members, even after the weak are willing to compromise. This leads to a war, which is called dharma-yuddha, or the battle for civilization. Civilization will collapse when the strong dominate the weak, when laws benefit the mighty rather than the meek, for then civilization will resemble the jungle.

Bhagavad Gita talks about yagna as well as yoga. Yoga is traditionally defined as the uncrumpling of the human mind. The human mind is unique. It is blessed with imagination, so can be expanded with wisdom, and contracted with hunger and fear. Yoga enables the expansion of the mind, by unknotting the knots of hunger and fear that contract the mind. Yagna truly happens when it telescopes into yoga. For yagna demands giving away what you have to someone else. What is mine is yours, is the essence of the word ‘svaha’ uttered when making an offering in the hope that the god, pleased with what he receives, will reciprocate, and give what we desire, saying, ‘tathastu,’ or so be it. I give what I have to get what I want: this is the principle of yagna, as well as economics.

To take things, without giving things, is exploitation. In yagna, you give in order to receive. But if you give, only to receive, and not to satisfy the needs of the other, you do not expand your mind. Your mind focused on your hunger will stay contracted. To expand, your mind needs to empathize with the hunger of those you are feeding. You need to see the other, gain insight into their hungers and fears, and reflect on your own hunger and fear, what makes you cling to what you have, what prevents you from trusting others to reciprocate.

This act of seeing in order to gain insight about the other and reflect on the self, is called darshan. Darshan helps you make the journey from dependence through independence to dependability. It helps you take responsibility without expecting others to reciprocate. It demands you resist the urge to control the other, force them to comply or agree with your point of view. You learn to acknowledge, appreciate, and accommodate other points of view, shaped by hunger, fear and imagination. When this happens the crumpled contracted mind uncrumples and expands. The expanded mind is called brahmana in Veda, from the roots ‘brah’ which means expand and ‘manas’ which is mind.

If the early Vedic texts talk about yagna, then the later Vedic texts, known as Upanishads or Vedanta, talk about yoga, about the journey from ahamkara, which is the crumpled hungry and insecure mind, to atma, the uncrumpled expanded tranquil mind. The atma is the expanded mind that thinks about the other’s role in creating the self. It therefore values exchange over sacrifice, trade over raid, and favour a healthy mutually beneficial balance of payments. For this to happen, yagna and yoga need to work together.