There are no Rain Gods anymore 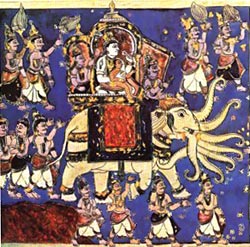 This article was published in Times of India, page 2, on Saturday, 6th August 2005

With disaster striking Mumbai in the form of rains, media reports constantly refer to rain gods. But who are the rain gods? Indra? Yes, but when was the last time you saw a temple dedicated to him. Monsoon, in fact, is the time when Hindu gods go to sleep.

For four months, from Shayani Ekadashi to Prabhodini Ekadashi, when rains lash the earth and flood waters rise, Vishnu slumbers on the great hooded serpent, Sesha. His going to sleep and his subsequent awakening are marked by fairs and festivals in Vaishanva holy spots such as Pandharpur in Maharashtra.

The rainy season falls during the night of gods, in the inauspicious half of the year, when the sun moves south along the horizon from the house of Cancer to the house of Capricorn. This is Dakshina-yana. Days get shorter and colder. The demons rise. It is the time of disease and disaster. Of Asuras and Rakshasas. This is Chatur-maas, four months, when holy men are prohibited from traveling.

Powerful Asuras rumble into the sky in the form of dark monsoon clouds, withholding water until Indra hurls his thunderbolt and causes the rain to fall. In Vedic times, yagnas were performed in summer to empower Indra clear the skies. Vedic poets described monsoon clouds as a herd of wild trumpeting elephants. Indra rode a white elephant, symbol of white clouds associated with clear skies.

Elephants have long been associated with water. As have yakshas, pot-bellied demi-gods as misshapen as monsoon clouds. Also asparas or nymphs. Many scholars believe that fertility rites associated with elephants, serpents, Yakshas and Apsaras, with their inherent erotic content, are pre-Vedic or at least, extra-Vedic. They were absorbed into the Vedic mainstream through later Vedic texts such as the Atharva Veda. That debate is academic. What is interesting is that as in modern times with the debate over censorship, since ancient times there has been a conflict between monastic orders and fertility cults and this conflict manifested in rituals and symbols.

For ancient Indians, celibacy with its otherworldly goals represented sterility and drought There is the story of Rishya-shringa whose father kept him away from women so long that the rains refused to fall. As soon as he was seduced by a courtesan sent by a local king, the rains poured. The earth awakened and women became fertile. Rishya-shringa became renowned as the rishi whose yagnas helped childless kings. He was the sage in the Ramayana who helped Dashratha bear four sons on his three wives.

Rain linked the masculine sky, Dyaus, with the feminine earth, Prithvi. Rain happened when the hermit submitted to the charms of the nymph. These ideas resonate in the summer festival known as Ganga Dasahara that marks the descent of the river Ganges from the heavens. Ganga is described as a water-nymph whose fall would have destroyed the earth had the great ascetic Shiva not risen from his deep meditation and caught her in his matted hair. She became his wife, he stopped being a hermit and the dry earth became fertile all year round.

As Hinduism became more monastic, Indra’s popularity waned. The lascivious god, lover of nymphs, became the cause of torrential rains to be humbled by Krishna who raised a mountain and turned it into a giant umbrella protecting the cowherds and milkmaids of his village. In the Bhagavata, Krishna tames the sexual urges with devotion. The clandestine eroticism of Krishna’s love for Radha is balanced with his submission to social obligations and his marriage to Rukmini. This is manifest in Krishna’s many triumphs described in many tales over the lascivious nymph-loving Indra. Krishna is the only form of God born during the inauspicious Chaturmaas. This makes him most suitable form of God to cope with Kali Yuga, the age of spiritual darkness, we apparently live in.

With the rise of bhakti, offerings to Indra stopped. People ignored the sexual symbolism of rain. Chaturmaas became the time to stay indoors and pray and fast. But the yakshas and asparas survived the onslaught of monastic discourses, taking the form of bejeweled women and plump men adoring even Buddhist and Jain shrines. Though invisibilized, they exist even today in temple rituals prescribed for summer. In Puri, Orissa, at the peak of summer, the image of Krishna-Jagannath is brought out of the sanctum sanctorum, bathed with water and covered with elephant masks. The devadasis or temple courtesans, while they were around, danced at night in front of the image of Jagannath’s brother, Balabhadra, believed locally to be a form of Shiva, hence celibate. This use of pouring water, elephant masks and courtesans is known as imitative magic, i.e. ritualistic representation of what one deeply desires – rain.