The Women In Buddhism 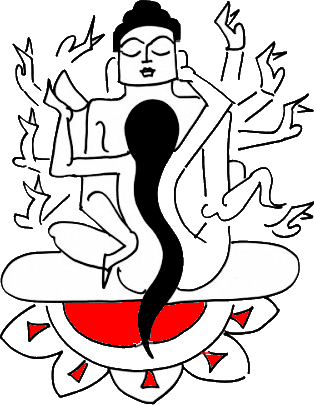 All religions insist they respect women. However they all have stories, art and laws that are rather patriarchal, if not outrightly misogynistic. When this is pointed out, believers and followers tend to become defensive and insist this is not the fault of the religion’s original essence, but of later interpreters. Such conversations have long been part of Hindu, Islamic and Christian studies, but only now are emerging in Buddhist study.

Buddhist imagery appears five centuries after the Buddha’s passing. At first, Buddha was represented symbolically. Then he was given a body. The only woman of prominence in early Buddhist art is his mother. She is shown either conceiving him while dreaming of an elephant or delivering him holding the branch of a tree or being visited by her son in heaven after his Buddhahood. Relatively fewer images show his wife, who he abandons, even the milkmaid who feeds him. There are of course women in the crowd of people adoring him, and women who are part of Jataka narratives.

Tara, a powerful Buddhist goddess, appears only a thousand years after the Buddha, five centuries after the first Buddhist art. This is part of a new school known as Mahayana where Buddha is more deity than teacher. Buddha is now linked with multiple saviour forms, the Bodhisattva. With Tara, the idea of compassion ( karuna) enters Buddhist thought. It is more emotional now, and less intellectual. Tara is shown with a lotus flower. In China, images of a female Buddha appear: Kwan Yin. She grants wishes. She is kind and loving, like a mother.

About 1,500 years after the Buddha, a thousand years into Buddhist art, we find Tantrik ideas seeping into Buddhism, especially in Tibet and eastern India. Now, we find Buddhist images explicitly showing sex and violence. Buddha and Bodhisattva are shown having sex with female deities, who are sources of power and esoteric knowledge. This ritual sex is considered metaphorical. But still, it remains a far cry from the monastic ideas of Buddha in 500 BCE. This is the time we have images of fierce female forms, the Dakinis and the Yoginis, associated with terrifying forms of Buddha and Bodhisattvas, such as Heruka. In principle, the smaller female form embodies wisdom ( pragnya) and the larger male form embodies compassion, but in art the two are rarely shown as equal, like Shiva and Shakti halves of the Ardharnareshwar form. In Tantrik Hindu art we find Kali towering atop Shiva, and has an equal if not superior relationship with her male counterpart, the same is never indicated in the Yab-Yum (father-mother) artwork of Tibetan Vajrayana.

Among literary texts, we find Therigatha, an early collection of verses composed by women. These include a woman who lost her child, a former sex worker, a rich woman who has given up her fortune, and even the Buddha’s mother, whose sorrow makes Buddha realise the need to let women also renounce society and become nuns. This is one of the earliest Indian texts that gives voice to the woman, but it also reflects traditional attitudes towards them. That women were physically weak, intellectually inferior and highly sensuous, and so needed to be bound by marriage and maternity.

The code for Buddhist monks, Vinaya, has more rules for women than men, justified on grounds of the inherent inequality between the male and the female biology, which makes it easier for men to be more spiritual and women to be more carnal. After an incident where women had sex with a monk while he was sleeping under a tree, monks were advised to sleep indoors. Monks who voluntarily submit to female charms were declared defeated ( parajita). In the tale of Sudinna, a young monk breaks his vows of celibacy after his old parents beg him to give his wife, whom he had abandoned, a child so that his family lineage may continue. When this is revealed, the Buddha admonishes him thus: “It is better for you to have put your manhood in the mouth of a venomous snake or a pit of burning charcoal than a woman.”

As per inscriptions, women of the Satavahana period, when Buddhist stupas were being built in the Deccan, were major donors and so may have softened attitudes towards women. But Jataka tales, through which Buddhist ideas reached the common man, are full of stories that see women as temptations to be feared, and to be admired only when they display sexual restraint. Takka Jataka tells the story of a woman who has sex with a man who saves her from drowning, and later with the thief who abducts her. Andabhuta Jataka tells the story of how a gambler wins the game of dice with a mantra that derives its power from the infidelity of women. In Kunala Jataka, the Bodhisattva himself, in the form of a cuckoo, tells eight tales of unfaithful, lustful, untrustworthy women. In Jatakas, Buddha takes 550 forms. Not one is that of a woman.

Buddhist lore is full of stories where nuns are warned that their greatest enemy is their body. And so we hear the story of a nun called Subha who plucks out her eye and gives it to the man who keeps praising it. In Japan we hear of Ryonen, who burns her beautiful face, so that she is allowed to enter the monastic order. In China, the Pure Land Buddhism speaks of Sukhavati heaven as a place where everyone has a male form and is born of a flower.

When it comes to misogyny in India, we often point to toxic masculinity celebrated on the silver screen, or to chauvinist stories of gods and heroes glamorised in epics such Ramayana and Mahabharata, or to Hindu art where Lakshmi is shown at feet of Vishnu, for example. We rarely look at monastic orders, privileging male biology, as sowing seeds of patriarchy. Many historians argue that several Buddhist beliefs and practices were appropriated by the Brahmanical orders. However, the list of appropriated ideas never includes misogyny.

Academicians have long nurtured the Orientalist image of Buddha being the fountainhead of all things rational and liberal in India, positioned as a traditional counter to the casteist and materialistic traditions of Hindu Brahmins. It is only now that scholars are exploring Buddhist art and literature through the lens of gender and throwing light on things that have hitherto gone unnoticed.