The wives of Krishna 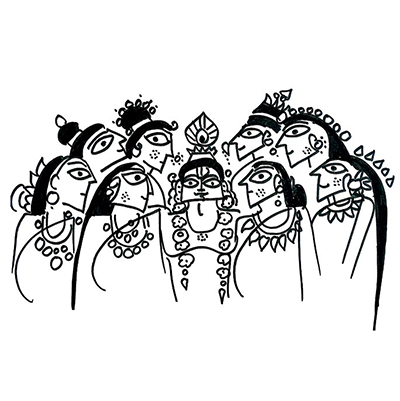 ‘Are you saying my Krishna is polygamous?’ the man said, his tone angry and threatening. I could not believe his reaction. Why was he surprised? Why was he angry? Was this not common knowledge? Since that strange confrontation years ago, I have met dozens like him, men and women confident about the scriptures without ever reading a single one.

Yet Krishna’s many marriages have been described in the various sources of Krishna stories: Mahabharata, Harivamsa, Vishnu Purana, Bhagavata Purana, dated from 300 BCE to 1300 CE. Krishna has eight principle wives (the asha-bharyas) and 16,100 junior wives. The eight principle wives are Rukmini of Vidarbha, Satyabhama, Jambavati, Kalindi, Bhadra of Kekeya, Mitravinda of Avanti, Satya of Kosala and Lakshmana of Madra. Rukmini elopes with Krishna. Satyabhama is given in marriage by Satrajit who is grateful that Krishna found the killer of his brother Prasenajit. Jambavati is given in marriage by the bear-king, Jambavan, who is impressed by Krishna’s strength in wrestling. Kalindi is the river Yamuna who follows Krishna from the Gangetic plains to Dwarka. Bhadra and Mitravinda choose Krishna in their respective swayamvaras. Satya’s hand in marriage is won by overpowering wild bulls, while Lakshmana’s hand is won by winning an archery contest. The 16100 junior wives are given protection by Krishna after he defeats Narakasura and discovers them in his harem. The story goes that when Narada visited Krishna in Dwarka he found 16,108 mansions and a Krishna in each mansion giving full attention to each of the senior and junior wives. Arguments go that this is metaphorical, but then all of mythology is metaphorical, a set of symbols communicating complex psychological ideas, even the idea of Krishna itself.

Then there is Radha, who is not mentioned in early Puranas but appears in folk literature and finally later Puranas, like the Brahmavaivarta Purana, where she is presented as his true cosmic wife, even though on earth she never marries him, but stays back in Vrinda-vana, with her husband while Krishna goes to Mathura and thence to Dwarka. And along with Radha are many milkmaids who dance around Krishna while he plays the flute in the forest of Madhu-vana at night. People have always been uncomfortable asking questions about Radha’s relationship with Krishna. In fact, in 1718, at the court of Nawab Murshid Ouli Khan there was a huge debate regarding the theology of Svakiya (Radha as married to Krishna) and Parakiya (Radha as married to someone else). The Parakiya side won!

Krishna’s polygamous nature is designed to stand in stark contrast to Ram’s monogamous nature. He is romantic rake, who breaks hearts while Ram is the faithful husband, who is always distant. Through these two contrasting forms of Vishnu, Vaishnava theology plays itself out.

But who is interested in theology and philosophy and metaphysics today? For many today, it is all about politics. We want our gods to be historical entities not psychological realities. We have convinced ourselves that the past is more important than present, matter is more important than mind. Our gods must have all the qualities we want — they must be monogamous and vegetarian, stories from scriptures not withstanding. Anyone who tells Krishna is not what we imagine Krishna to be must be of a Western mindset, a left liberal ‘sickular’. The imaginations of manipulative cult leaders have become the reality of their equally power-hungry domination-seeking followers. It does not help when ‘rational’ academicians use this information as ‘evidence’ to explain Indian patriarchy.