The West Believes History Has a Direction, a Purpose, an End. But Indian Worldview Is Different 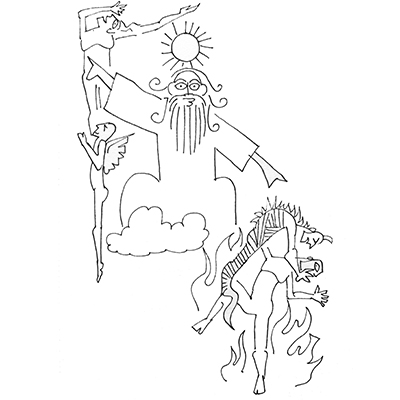 Conventional leadership frameworks begin with the notion that there is a problem to be solved, which leads to strategizing, planning, organising, implementing, regulating, motivating, enabling, and reviewing along the way. This model is linear: there is a target at the end. This model is based on Western mythologies, a mixture of Biblical and Greek mythologies.

The leader in its purest form has its roots in the Bible. He is chosen by a higher authority, he leads a team, a tribe, an institution to a better place, and does not seek any glory. The leader who seeks glory, who seeks to be extraordinary, who seeks to challenge the system, and subvert it with a new idea, is actually rooted in the idea of the Greek hero. We find both kinds of people in the world of activism and business. There is the self-effacing Chosen One who values the institution and thinks long-term. There is the self-indulgent self-made rebel who knows he has to change things here and now. In both cases, the end is clearly defined, the purpose is to achieve. Time is always limited: quarter-ends and year-ends. A sense of urgency prevails. There is constant appraisals as in this framework the supreme authority is ultimately a judge, and we are all moving towards Judgement Day, known in Arabic as Qayamat. Those who align, even if they do not achieve, go to heaven; those who don’t align go to hell. In Greek myths, the extraordinary heroes, or martyrs, go to a special heaven called Elysium, and regular folks go to Asphodel. There is no elaborate concept of consequence, or karma. This is because the West believes history has a direction, a purpose, an end. A climax.

There is no climax in this world. No triumph. No justice. There is only action and reaction. It explains diversity in the world: natural diversity, cultural diversity, economic diversity, political diversity. It also explains dynamism. Nothing lasts forever. And all this diversity and dynamism is perceived differently by different beings. This forms the basis of the Indian worldview.

Where there is diversity, there is always hierarchy. The West reads hierarchy as inequality and injustice, hence the quest for equality and social justice, where everyone must be treated equally and there needs to be a level playing field for all with equal opportunities. Such a situation exists only in human fantasy, not in reality. But this fantasy leads to righteous wars, as every warrior believes he is fighting for justice. In the Indian scheme of things. There are no problems or solutions. There are events. Problems can be solutions. Solutions can be problems. There is no climax. No Judgement Day. All hierarchies collapse eventually. What goes up, goes down. What rises, falls. The asura is always killed by the devas. And the devas keep losing their paradise to a new asura.

Can a management model be based on such a worldview? Can we think of business without thinking in terms of solving problems, being a leader or hero, someone who changes the world? None of the great business and political leaders of the world could predict or prevent Covid or the Russian-Ukraine war. So perhaps it is time to revisit the cockiness of these Western ideologies. These are wrapped in saffron and endorsed even by many Indian ‘gurus’ in their corporate lectures, since they know no better. We assume Western ideologies are universal timeless ideologies – not myths, cultural truths, favoured by colonial powers, designed for plunder, with a very short-sight, as they do see victory and success as climax. Indian mythologies see everything with a long-sight. No empire, no technology lasts forever. No one remembers the rat-race you won. This moment is important to you, now. It is meaningless in the next.

The Indian models are circular not linear, symbolised by the wheel that is found atop Buddhist shrines, Jain temples and held by Vishnu in his hand. It reminds us that everything is a cycle. Not just the seasons and the tides, but also organisations and ideologies. The best way to work then is to have a force and a counter-force and use them alternately. So balance ambition with contentment, giving with taking. Spend the first half of your life consuming the world. And the second half of your life is consumed by the world. Eat in the first half of your life. Let yourself be eaten in the second half of your life. We consume others but others can also consume us in a circular model. In a linear model, you just eat. And forget to feed others. This breeds exploitation, which is at the heart of Capitalism, but Capitalists simply call it efficiency.