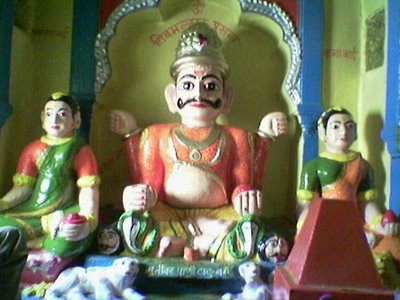 Most villages in India has a Grama-devata, a rather ferocious looking deity, that is the local guardian god, often shown riding a horse, brandishing a sword, accompanied by a dog. Most villages also have a Grama-devi, a goddess, usually taking the form of a rock with large silver eyes; she is the fertility goddess. Together they are the divine embodiment of the village protecting and providing for the village.

Ask a village who is the Grama-devata or the Grama-devi, and they will give a local name and tell a local legend. But then they will identify him and her with a more mainstream god like Shiva, Vishnu or Devi. Thus the deity becomes a local manifestation of the universal divine. That is why the polytheism of Hinduism is also monotheism; there is unity in diversity even in the realm of the divine.

A film production house based in Mumbai has a problem. When it began, Keyur was the man-in-charge. He started the company. He was everything form peon to proprietor, serving everyone’s needs. Everybody knew him and he knew every body. He was on a first name basis with everyone. Everyone could walk up to him with a problem. And he walked up to everyone to give them a hand when there was trouble or a hug when something was achieved.

But then the business grew. They are now making more ad-films and more teleserials. And they are venturing into feature films. Keyur has nearly a dozen project managers handling a variety of projects. He is rarely seen on the sets or in the editing room. He is busy getting new business. He is not as involved in operations as he used to be.

But Keyur likes to be in control. Nothing moves in the company without his intervention. He still insists on signing all bills and purchase orders and cheques. No one is hired without his approval. And considering he has only 24 hours in a day, he is not able to cope.

What Keyur needs to do is create local deities who satisfy local needs while retaining his philosophy and values. His philosophy and values need to be abstract and strategic enough for the local deities to make it work locally. He cannot afford to think tactical because he is now increasingly far away from the ground reality. He has to invest time in the Grama-Devatas, make sure that their mindset is aligned to his, so that culturally where there is diversity, there is organizational unity on a few key principles.

Keyur fears that if he creates Grama-Devatas he will lose power. He fears that this will lead to a power-centre and politics. He would rather have central control. But in doing so, he is lowering efficiency and effectiveness. It also means that he does not trust his team. When a team does not feel trusted, it will not remain loyal. Attrition will follow.

Talent management is all about creating local deities, who satisfy local needs without losing alignment with the universal divine. And there can be several layers of Grama-Devatas, like the many deities of Hinduism known as Ishta-Devata, Kula-Devata, Graha-Devata, Grama-Devata who satisfy the varying needs of the individual, the family, the household and the village.