The vessel of rasa 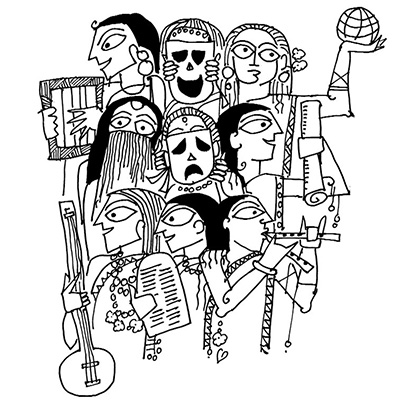 Typically, in India, we refer to an actor in a play or a character in a book as ‘patra’ which literally means vessel. Why? To understand this, we perhaps have to appreciate the two distinct ways of telling a story: the Western way and the Indian way.

Aristotle, the Greek philosopher, student of Plato, teacher of Alexander, is considered the fountainhead of the Western approach to narratives. His ‘poetics’ looks at narratives very intellectually, focusing on one character, the hero and his transformation following a dramatic event. Here, storytelling begins by paying attention to the idea, which is expressed through plot and character. The audience watches this, identifies with the character, and experiences catharsis, a purging of their own bottled up emotions. Thus, the journey is from the head to the heart.

Bharata composed the Natyashastra probably around the same time as Aristotle. He too was interested in theatre as a medium. However, there is a fundamental difference between Aristotle’s Poetics and Bharata’s Natyashastra. Bharata focuses more on sensations (rasa) evoked in the audience, and emotions (bhava) of the performer, and less on the story itself. The expressions, posture and gestures of the performer need to be rooted in a particular emotion (bhava) so that it evokes an aesthetic sensory experience (rasa) in the audience. Here, the journey is from the heart to the head.

The Western way of storytelling therefore, focuses on one character, one plot, one transformation, and one dominant emotion. In complex storytelling, multiple such linear story lines are woven together into a tapestry. Here, the idea matters and through the idea one emotion rises and falls. We see this in Shakespeare’s plays: the hesitation of Hamlet, the romance of Romeo and Juliet, the impatient passion of Othello. Each of these plays has a clear story, with a distinct emotion.

By contrast, in the Indian way of storytelling the point is to nourish the audience with a whole range of sensations and emotions. At the end of story, has the viewer experienced joy, anger, pleasure, hatred, love, compassion, sorrow? Here, the idea does not matter as much. When we think of Ram or Krishna, or Shiva, an emotion is evoked, and the whole purpose of their sagas is to reinforce that emotion. As in an Indian thali, where there are different flavours, the rasa associated with Ram becomes distinct and gets amplified because of other rasas evoked by other characters of the Ramayana such as Lakshman, Sita, Hanuman and Ravana.

Hollywood films, not surprisingly, are famous for great plots and characters. Bollywood films, by contrast, are more known for the songs, the dance, the colour, their operatic style, their melodrama, where plot and character are afterthoughts. In a Hollywood film, what matters is the pace and build-up to the climax. In a Bollywood film, what matters is the rush of sensations and emotions, so there is no discomfort with disjointed stories or irrational plots. In Western storytelling the actor is a container of an idea. In Indian storytelling, the actor is a vessel who nourishes the audience with rasa.