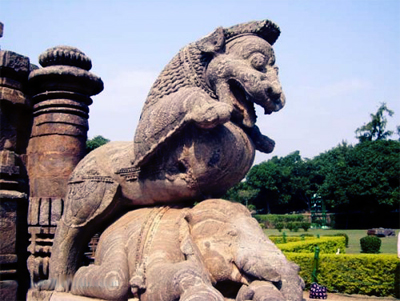 In ancient India, the throne on which kings sat was known as the Singh-asan, the lion-seat. The patron goddess of kings, Durga, also rode lions. Images of lions adorned the gates of royal palaces and could be seen atop pillars. One such image adorns our national emblem. The close association of lions with royalty had a reason. Everyone knew that the lion was the king of the jungle, the greatest predator, on top of the food chain with no natural enemy. But that was not what a king was supposed to be.

Lions are the ultimate alpha males. A lion lays claim over a pride of lionesses by fighting off other males. The battle is fierce. The winner takes it all. The losers are left without mates. There is no sharing. When a lion takes over a pride it kills all the cubs fathered by the previous alpha male. Thus he ensures that only his gene pool survives. Having taken over a pride he rests, leaving all the hunting to the lionesses. When the lionesses hunt a prey, they make way and allow the lion to eat his fill before they feed themselves. Thus in a pride, the lionesses do all the work while the lion enjoys the fruits of their labour. They hunt, he eats. They bear his cubs and take care of the young, it is the lion who decides if a young cub should live or die. He is the absolute master and they are his slaves.

For many people, lions are the perfect symbol of leadership. Followers should be like lionesses, afraid of and subservient to the lion. When the leader takes over he wipes out all traces of the predecessor. The leader does no work, nor does he help or guide. All he does is relax and stake claim to the fruits of the labour of the followers.

This is the case in the warehouse at Bhiwandi where Shekhawat is in charge. He sits all day in his office and expects his team to deliver. If they don’t, he denies them wages or delays their bonuses. Everybody fears Shekhawat. There are rumours that he uses violence to intimidate his people. He does not like being criticized. And if anyone complains about him to the management, they risk losing their job, or something worse. But the management in Mumbai allows Shekhawat to function. He is their iron man. They feel only he can manage the rather tough lot at the warehouse. Before Shekhawat, they had sent Pande to manage the warehouse. Pande was a gentleman who tried to motivate the men with words and tried to get everyone to follow the policies. But the labourers were a rowdy bunch. They simply ignored Pande and threatened to form a union when he tried to act tough. Pande had to be replaced. Shekhawat was brought in. He used brute force to get the workers at the warehouse in order. They quivered in his presence. Like lionesses, they did what he told them to do. This made the management happy. But they are also afraid. Shekhawat knows his power and is slowly becoming a law unto himself. There are rumours that he demands bribes from vendors before allowing their goods to be unloaded from trucks. No one is sure, but no one is willing to check. They fear the roar of Shekhawat.

Shekhawat is practicing leadership by fear. He is the lion. His team are his lionesses. The tragedy is, as observed in the case of Pande, his followers respond only to a lion. They want to be lionesses!

Leadership by fear may not be part of management books, but it a tried and tested method. Feudalism is essentially leadership by fear. Today explicit violence may be considered illegal and uncivilized, but implicit violence is still practiced, and extremely popular. The most popular non-violent fear-inducing tool is the threat of sacking people. This is especially visible when the markets are down and jobs are scarce. When a manager says, “My way or the high way,” it is a lion growling. One often hears managers moaning that young people today are not afraid and in fact threaten to quit when threatened with sacking, indicating their desire to be lions.

But in ancient India, the king was expected to sit on a lion, not be a lion. His patron goddess, Durga, rode a lion, meaning she domesticated the king of the jungle. The message here is about human beings having the ability to overpower and outgrow the animal urge to dominate and frighten others into submission. The king was not expected to treat his people like animals who needed to be controlled by fear or force, or tamed by ‘carrot and stick’. To treat people like lionesses and to behave like a lion is an act of de-humanization. A king was expected to help his subjects discover their humanity. Humans are the only animals who can empathize. The king was therefore expected to provoke his people into empathy, and in the process unlock their own hidden potential. To be the lion is to be the leader who frightens. To sit on the lion-throne was to be a leader who inspires.