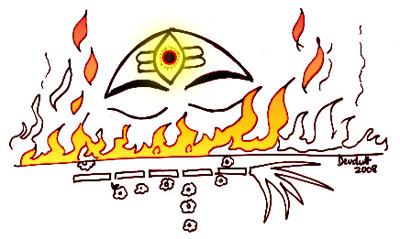 Shiva’s third eye has always fascinated people.  It stands there dramatically on his forehead ready to release a missile of fire and destroy the world. Many people assume that is why Shiva is called the `destroyer’. They also assume that this eye opens when Shiva is angry. Typically, in modern dance ballets based on Shiva’s sacred lore, one often finds drums beating frantically and the actor playing Shiva dancing fiercely, going all around the stage rather energetically, expressing Shiva’s rage and sorrow at the death of his spouse, Sati, threatening to destroy all by opening his third eye, until all the gods salute him, sing songs to his glory and beg him to calm down.

But a reading of Shiva’s lore reveals something different. Yes, Shiva is furious when his wife, Sati, kills herself. The story goes that Sati marries Shiva against the wishes of her father, Daksha, who wants this daughter, like his other daughters, to marry a Deva, or god, rather than an ascetic. In retaliation, Daksha organizes a fire-sacrifice or yagna and invites all his sons-in-laws except Shiva, to partake of the ritual. Angry at the exclusion of her husband, Sati rushes into the sacrificial precinct and confronts her father, who mocks Shiva’s ascetic ways in front of all the assembled guests. Unable to bear this public humiliation, Sati kills herself by leaping into the sacrificial fire thereby polluting the ritual space and causing the yagna to grind to a halt. When Shiva learns of this event, he experiences deep rage and sorrow. Casting away his usual calm indifference, he transforms into Virabhadra, a fierce warrior, and goes on a rampage attacking everyone who had been silent witnesses to Sati’s death. He stops only when Daksha is beheaded. But the vengeance does not take away the sorrow – Shiva then goes around the world carrying the charred remains of Sati’s corpse, tears rolling down his eyes, moaning piteously. All those who hear him feel the depths of his pain. Fearing that Shiva’s sorrow threatens the wellbeing of the world, the Devas destroy Sati’s corpse, cutting it into tiny pieces. With the body gone, Shiva is able to overcome his sorrow. In keeping with his ascetic nature, he withdraws into a cave in the snowy peaks of the Himalayas, cleansing himself of all anger and pain, rejecting all things worldly.

The story, full of romance and vengeance, sounds like a divine soap opera and is portrayed as such in folk theatre and Bollywood mythologicals. But no where in this narrative is there any mention of Shiva’s third eye.

Shiva opens his third eye much later, when Sati is reborn as the daughter of the mountains, Parvati, and, smitten by Shiva, tries her best to evoke a romantic response in him. Shiva remains impassive, exasperating both her and the Devas who are eager to get Shiva married. So they send Kama, the god of lust, to raise his sugarcane bow, pull his bowstring buzzing with bees and shoot flowery darts of desire into Shiva’s heart. This is done. Unfortunately, the result is not quite what anyone expects. Instead of opening his eyes and expressing his desire for Parvati, Shiva opens a third eye, in the centre of the forehead and out comes a missile of fire that sets Kama aflame. Before Parvati’s horrified eyes, Kama is reduced to a pile of ashes. It is then that Shiva gets the name destroyer.

Realizing that Shiva will not respond to lust, the Devas are in a fix. How do they resurrect Kama? They turn to Parvati who turns out to be no ordinary girl. She is the mother-goddess, Shakti, herself, the feminine counterpart of Shiva, complementing everything he is. In South Indian temples, she is visualized holding all symbols associated with Kama – sugarcane bow, flowery darts, parrots. She is even called Kamakshi, she in whose eyes resides Kama. Thus she is the very opposite of Shiva. If Shiva negates Kama, she affirms and celebrates Kama. She takes it upon herself to transform the hermit into a householder and make him acknowledge the importance of lust and desire in the world. But the method she adopts takes everyone by surprise. She prays.

Parvati shuts her eyes, sits immobilized, and thinks of Shiva with such intensity that she does not respond to any external stimuli. She does not eat, does not sleep; she only thinks of Shiva. All attempts to shake her out of her resolve fail. By the power of her prayer, she forces Shiva to step out of his cave and present himself before her and offer her a boon. Thus, through prayer, Shakti demonstrates her determination to realize her desire – and even Shiva, the destroyer of the god of desire, is forced to submit. What do you want? he asks. And she says, I want you to be my husband. Shiva has no choice but to accept.

Shiva’s third eye represents the rejection of desire. It is the eye that killed Kama, the principle that makes the world go round. And why does Shiva reject desire? Because he realized what desire can do – when the object of desire (Sati) goes away, there is immense sorrow and rage. Desire not only evokes positive emotions (love, affection, contentment, compassion), it also evokes negative emotions (anger, dissatisfaction, sorrow). Shiva therefore shies away from it, preferring the cold still mountains which represent the state of transcendence or ananda – where there is no tumult of emotions, just stillness, silence and bliss.

But in transcendence, Shiva is Bholenath – the innocent one. So innocent that he has no sense of how a `groom’ is supposed to be. And so during his marriage, he presents himself smeared in ashes, drunk on bhang, covered with snakes, and accompanied by ghosts. He is so ignorant of worldly propriety that he does not even know what a `wife’ is supposed to be. When Ravana, a demon-devotee of Shiva, says, I wish to marry your wife, Shiva replies without guile, So be it. Though exasperated, Shakti alone understands that her great hermit husband is unable to appreciate the rights and duties of being a householder. That is why only she can manage as his wife, gradually introducing him to worldly ways.

One day, in a spirit of play, Parvati shut Shiva’s two normal eyes. The world was plunged in darkness as Shiva’s eyes energized the world. Shiva therefore opened his third eye and helped the sun shine once again. The heat of the third eye caused Parvati’s hands that covered Shiva’s left and right eyes to perspire. That perspiration filled with the power of Shiva (heat) and Shakti (water) transformed into a child called Andhaka. Andhaka was given in adoption to a childless Asura-devotee of Shiva. He grew up never knowing his true origins. As a young man he performed great penance and obtained a boon: that he would be killed by his father if he ever experienced lust for his mother. Empowered by this boon, he went on to conquer the three worlds. During his journey, he stumbled upon Parvati, and aroused by her beauty, decided to make her his queen. As he chased her, Parvati called out to Shiva who came to her rescue and impaled Andhaka on his trident. As the blood drained out of Andhaka’s body, he realized the truth of his birth and apologized for his incestuous desires.

This story dramatically presents the dark side of the third eye. When desire is destroyed, then all divisions crumble – there is no right side or left side, nothing good or nothing bad, nothing right or nothing wrong, nothing auspicious and nothing inauspicious, nothing mine and nothing yours. One transcends all worldly divisions and discriminations and hierarchies. But according to this story, this transcendental state blinds one to worldly realities. Andhaka means the `blind one’, so blind that he does not even distinguish between mother and wife. The third eye destroys all sense of ownership – one loses sense of what is mine and what is not mine. So no woman can ever be wife or mother. Or rather all women become wife and mothers. This creates chaos as in the story of Andhaka. Hence while hermits celebrate the third eye of Shiva which rejects all worldly desires, the householders prefer the left and right eye of Shiva which accepts the need for worldly desires and worldly rules of appropriate conduct, rules that, in the beginning of Shiva’s lore, Daksha demanded of his sons-in-law.