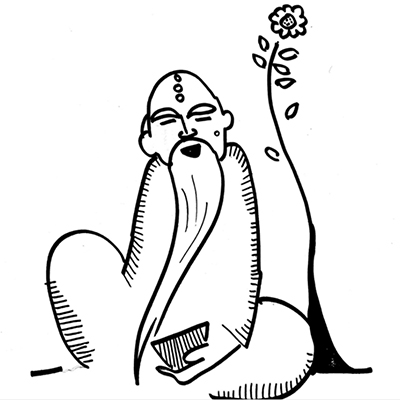 The spiritual marketplace: New Era Gurus Are Here to Help You Find Your Ikigai.

A market is where there are buyers and sellers. There are people who seek spiritual comfort and those who provide it. That creates the spiritual marketplace. It has always existed since the time of the first shaman; we are simply embarrassed to acknowledge it. We are conditioned to see commerce as incompatible with spirituality. That’s not true. Gurus have needs like the rest of us.

Other than their fans and followers, everybody knows they are human. He has to provide for his family, and his lifestyle. This means the guru needs resources. For those resources, the only product and service that he has to sell is his knowledge.

He presents this to the market using charming speech. And to distinguish himself as a brand in the crowded spiritual marketplace, he adorns himself with appropriate costume. Spirituality is just an exotic word for positive psychology.

In ancient times, depression, anxiety, panic, hallucinations, psychosis, neurosis were explained through ‘ghosts’, i.e. spirits. Those who got rid of these ‘ghosts’ became a much sought after ‘magician’. Today we call them therapists. Some cure you through conversation, others through practices like meditation and yoga, still others through drama, song, and grand overwhelming performances like kirtans and festivals that shock and awe the senses. The demand is huge for such spiritual performers.

Some young students are lost professionally. They studied engineering but do not feel that they are worthy of engineers. Those that studied medicine don’t want to be doctors. They get lost in their careers. They do not find that sweet Ikigai spot, which makes them money and also satisfies them. There are the heartbroken lovers. There are middle-aged men in crisis with their careers. Men who could have been CEOs but do not become CEOs. Men who became CEOs and the new management side lines them. Housewives who realize that they are being treated as glamorized service providers. There are the old couples with the empty nest syndrome. Where will they all go? These people create the market for gurudom. The guru offers many products and services. He provides self-help tips. He provides amusing anecdotes. He tells stories that make you feel good about yourself. He helps you deal with mental health issues. He helps you deal with physical issues by providing yoga. He explains sacred texts. He suggests good health habits – in a way, he provides a kind of a paramedical service.

The guru’s ashram (gurudom) provides spa services, massages, restaurants all in the name of Ayurveda, yoga and Siddha. The guru also sells products like medicines, yoga mats, furniture, special organic clothing. For spiritual health, the gurudom guides people on how to be charitable. This charity is done via the guru. You can make yourself feel valuable by giving free services (seva), thereby providing free labour to the guru. You can take part in the guru’s activism, either religious or otherwise. And he can even generate vote banks for politicians! The guru provides his fans and followers with a vision to make the world a better place by following him. The guru becomes the centre of attention. He takes all decisions. That you can outsource responsibility to him is the greatest service that the guru offers.

As the guru becomes a brand, it feels good to be part of this brand. By contributing to the brand you are nourished by it. Those who feel lonely feel part of a community, a bee in the beehive with a clear queen bee. Most importantly, since the entire aura is spiritual, payment can be received as ‘charity’. Using potent vocabulary, the gurus spiritualise capitalist jargons. It’s a great guilt-alleviation technology which gets gurus invited to global conferences of the rich and famous, where Gita lectures by saffron-robed celibate men gets standing ovations.

We can feel cynical about these practices, but where there is a demand there is supply. If the gurus did not exist, we would be in a mental health crisis. People would be lost. Gurus simply occupy spaces that were once occupied by prophets, sages and saints, even gods. Indeed, gurus of India have popularised the Guru Gita, attributed to Shiva himself, that states guru is greater than everyone else in your life, including parents, friends and even God. If the guru says it, it must be true.