The Shudra Inside Us 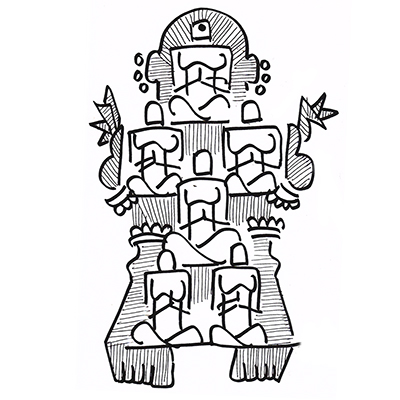 The gesture of namaste means to salute the divine within people. It is also a gesture of humility, humiliation, submission and petition before power. Namaste between equals has the former meaning but the latter meaning is evoked through the namaste of a junior to a senior, of a servant to a master, of a student to a master, of a child to a parent. A simple gesture expresses power dynamics in religious, spiritual as well as social contexts.

In bhakti poetry, we often use the word ‘malik’ or ‘nath’, which means master for God. Meera tells Krishna to keep her as his ‘chakar’, or servant. Those who do free service for gurus and in temples, are happy to be ‘dasa’ and do ‘seva’. Dasa-bhaav, or emotion of servitude, displayed by Hanuman towards Ram is seen as a form of passionate devotion that unites the jiva-atma of the devotee with the param-atma of the deity. Many argue this reminds us how feudal India is and how such approaches to the divine seem to normalise patriarchy. We don’t mind serving the divine, or serving gurus, and acharyas, but do we treat servants and service providers with respect? If we did, would we see Shudra varna as the ‘lowest’ varna?

In the Vedas, the Brahmins who perform rituals are seen as the head of the Purusha, while Shudras form the feet. In the Gita, the Shudra is described as one who serves the other three varnas. When we choose to serve, it can be seen as an exercise in humility. But when one is bound to serve, with no choice whatsoever, it is humiliating. It is rather patronising when someone from the upper varna tells a Shudra that there is glory in serving.

In ancient India, Brahmins acquired power through education and access to Vedas, Kshatriyas acquired power by controlling land, and Vaishyas acquired power by producing and trading products. Shudras, however, provided services. Skilled services were ranked higher than unskilled ones. In all these societies, skilled service-providers such as potters, metal-smiths, weavers, carpenters, barbers and washermen did have greater power than unskilled labourers. As the ‘doctrine of purity’ evolved, those engaged in ‘unclean’ professions such as butchers, tanners and sweepers were further sidelined from power, even dehumanised through practice of untouchability, something that continues in the name of purity and holiness.

In temple towns, those who lived in the centre had most power and purity; those who lived on the edge had least power and purity. So deeply entrenched is this idea of caste purity that in cities of Pakistan, even amongst Muslim population, one hears how communities of sweepers and sewer cleaners are seen as dirty and inferior, not allowed to convert to Islam, as that would make them ‘equal’.’

In ancient India, dasi-putra or son of a slave-woman was a term of derision. The term ‘servant’ or ‘naukar’ remains an insult in society. In bhakti period, many saints called themselves Shudra-muni and challenged caste hierarchy insisting that in the eyes of God all are equal. But today, if anyone speaks of the service class, he is often branded as Marxist and Leftist and so anti-national.

In pre-industrial societies there was no concept of social mobility; one’s fate was very much decided at birth. But in industrial society, we are told that everyone should have equal opportunities and choices. Be that as it may, in the end, we all have to be ‘useful’ to society and provide goods or services. Which means we are either product-sellers and traders, the Vaishya, or service provider, the Shudra. Words like Brahmin and Kshatriya are merely cosmetic and nostalgic.

Today, teaching is a service, serving in army, bureaucracy or corporation is a service, hospitality is a service, doctors are serving, cooks and cleaners are serving, accountants are serving, drivers are serving. Yet, we do not consider the service class as Shudras. Isn’t a businessman who provides outsourcing services to international clients technically a Shudra? Isn’t a soldier or politician serving the nation also a Shudra? Isn’t a journalist who serves the public by speaking truth to power a Shudra? If everyone serves the nation, are we not all Shudras? If we flinch at the thought, we have to ask ourselves why? For it reveals hierarchies we cling on to. Why do we classify some services as Shudra and others being non-Shudra? Even today we celebrate the rise of Karna from charioteer to archer as a sign of social mobility. But how many of us are comfortable describing Krishna the cowherd and Krishna the charioteer as service-provider?