The Rise of the Indian Goddess 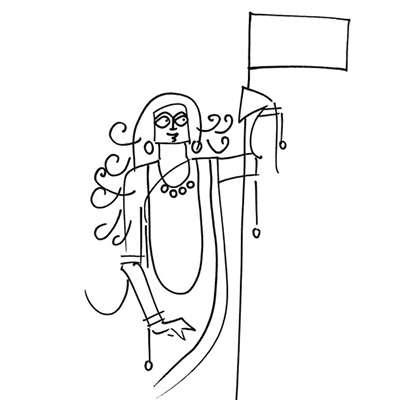 How old are the goddesses of India? It is extremely difficult to answer this question. Maybe it started in the Stone Age, when man equated the Earth to a goddess or the womb of a woman, or saw goddesses in trees, in rivers. The Baghor stone, with triangular markings, located in the Son Valley of Madhya Pradesh, has been identified as the most ancient cult object in India, probably 10,000 years old. Its triangular markings suggest worship of a gendered deity. But such an assumption is based on Tantrik geometry that became widespread only 9,000 years later.

The earliest people who worshipped goddesses did not know how to read and write or sculpt or draw in a way that we can understand today. Therefore, we have no scriptural or material evidence of the oldest goddesses. They probably used organic material to depict these goddesses, like rocks, lumps of clay, and vegetation, as many still do today in ritual practice in India. As a result, there are no material records of these old goddesses. We refer to these goddesses as Kuladevis, and Gramadevis, clan and settlement goddesses, and they are still part of many traditions across India.

If one goes to old shrines, one finds, usually, the goddess depicted by a rock covered with turmeric, or vermillion, or saffron colour. There are silver eyes placed on top of the rock. These were the oldest goddesses in India. It is impossible to put a date on when their worship began.

From a scriptural point of view, the oldest goddesses are in the Rig Veda, which is over 3,000 years old. Here we find reference to the goddess of dawn, Usha, and the goddess of the forest, Aranyani. We also come across the goddess of speech, Vak. Then there is the goddess linked to power, Durga, and to affluence, Sri. But, there are no forms to describe them. They seem more conceptual.

From a material point of view, the oldest visibly recognisable goddess appears in the that this is perhaps creature folklore, a yakshi, a ferocious spirit. But these are speculations, for we do not know what the seals actually show.

Coins and stupas Two thousand years after Harappa, a 1,000 years after Rig Veda, images of the goddess started appearing in India on Indo-Greek, Kushan and Gupta coins. On these coins, we see images of a goddess holding a cornucopia in her hand, overflowing with gold. This image found on the coins gradually becomes goddess Lakshmi, found in the Buddhist stupas of Sanchi and Barhut. The earliest image of Saraswati is found in Mathura and linked to the Jain traditions. These goddesses are two-armed goddesses. A four-armed goddess appears much later in Kushan art, slaying a buffalo. She eventually becomes the form of Durga we are now familiar with, whose image is popularised in Pallava and Chalukya art of the 7th century.

By the Gupta period, about 1,500 years ago, goddesses were emerging in their own right. They appear as the companion of Buddha in the form of Tara and Mahamayuri in Buddhist traditions. In Hindu traditions, they appear as the consort of Vishnu and of Shiva. In the Parashurameshvara Temple, which was built in the 7th century in Odisha, we find the goddess sitting next to Shiva as his wife. She is shown feeding him food. Similar images of Shiva are found in the Elephanta Caves near Mumbai. This is the period when the familiar goddesses, as we know them, emerge: especially Lakshmi, Durga and Parvati. The goddesses are consorts, two-armed and demure next to the grander and bigger four-armed Shiva, Vishnu and Brahma.

We find a gradual evolution of multiple-armed goddesses. These become popular in Jain shrines especially, where multi-armed goddesses such as Ambika, Padmavati and Chakreshwari guard the Tirthankaras. They are also seen in Tantrik shrines as yoginis and dakinis revered by Hindus and Buddhists. In Nepal, we find towns built around the concept of Nava-Durga, with the patron goddess, Taleju, at the centre of the city surrounded by eight goddesses in the eight directions. Overtime, the central female deity became the consort of a male god, either a Bhairava or a Vishnu. The king was supposed to be a child of this union.

When goddesses became linked to kingship, their power grew. Durga was the goddess of kings, guardian of his fortress, and embodiment of his throne. There were tales of the goddess appearing in dreams, giving a future king a sword or leading him to a treasure, assuring him of power and success provided he served her and offered her the blood of his enemies. In Pala art of 9th century Bengal, the king was imagined as Vishnu with two wives, Lakshmi who brings wealth, and Saraswati who embodies the arts. Without the goddess, a man could not be king. She was Rajrajeshwari, the goddess of royal folk. Here, gender roles reversed with male gods coming together to form a throne on which the goddess of kings sits. These kings are those conquered. The goddess is the mother of the conqueror. Such ideas established the power and popularity of goddesses.

A tripartite struggle emerges between those who worship Shiva, Vishnu and Devi, and often peace is achieved by showing the goddess between two male gods. But while a god is imagined as having two female consorts, the goddess never has two male consorts. She has one god, often Shiva, as her consort, and the other, Vishnu, as her brother. Or the two male gods by her side become her sons, or her guardians. Independent, like her male counterparts, she is fierce. Relationships tone down the aggression, make her more domestic and accessible.

During India’s freedom struggle, the goddess was reimagined to suit the zeitgeist. Many writers described India metaphorically as a goddess who had been stripped of her wealth and power and turned into the naked Chamunda by her foreign rulers. In her original role, Chamunda of the 10th century was goddess of battlefields, corpses, and ghosts. The freedom fighters saw themselves as the sons of Bharat Mata, who would restore her honour and her glory. Thus the goddess of the clan and the settlement was reimagined as the goddess of the nation. Artists, however, could never agree if she should be shown with a book in hand like Saraswati, or with grain in her hand like Lakshmi, or a trident like Durga.