The rise of non-violent terrorism 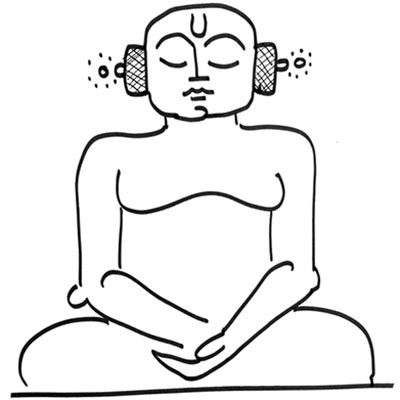 It has finally happened. Non-violent people can now become terrorists, without shedding a drop of blood. They do not have to carry guns, blow up towers, or behead people on camera. They can simply use their financial and political might to create legislation that denies people their food, clothes, freedom, pleasure, and even insist on the excesses of caste, and thus mentally terrorise people into submission.

Since no blood is spilt, and no one is physically hurt, technically, it cannot be called terrorism. So it is a kind of non-terrorism that enables you to terrorise people and gain respect. And why not? Why should only violent people have all the fun, and power?

It is ironic that the lines are getting blurred between the severest form of Jainism and militant Brahmanism in the name of Hindutva propagated by some sections of the BJP. They have clearly decided to forget the long history of antagonism between the two groups. Or maybe they are just unaware.

Traditionally, Jains have never liked militant Hindus steamrolling them as a sect of Hinduism. They resent the fact that their contribution to India is often diluted, or even appropriated by the dominant religion. We are told about Ashoka’s conversion to Buddhism but few talk about Chandragupta Maurya’s conversion to Jainism. Few know that the Brahmi script, mother of all Indian scripts, was invented by the daughter of the Jain Tirthankara, Rishabhanatha, who probably lived before the Vedas were composed, and whose “bull” symbol can be found in Indus Valley seals. Nobody tells us that before Brahmanism reached the Tamil lands, it was the home of Jainism. It is referred to in the earliest Tamil epics, written 1,500 years ago, or the many legends of violent persecution of Jain ascetics in south India by Hindu and Buddhist kings.

Most critically, people simply assume that “ahimsa” is a Hindu idea, when, in fact, it is a Jain idea and there is a vast amount of literature that shows us how animals were sacrificed during Vedic yagnas, but with the rise of monastic orders like Buddhism, this practice was frowned upon and eventually many brahmins — not all — adopted vegetarianism and saw non-violence as a virtue.

In Jain scriptures, it is clear that Hindus were a violent community. While the Hindu Ramayanas speak of Ram killing Ravana, in the Jain Ramayanas, Lakshmana does the killing and Ram, known as Padma, remains non-violent. Krishna, however, is condemned for his violence! In page 290 of Padmanabh S Jaini’s Collected Papers on Jaina Studies, we find that during the wedding of his cousin Nemi, Krishna “deliberately caused a great many animals to be penned in for the purpose of feeding their meat to the guests”. Nemi was so disgusted that he refused to marry and instead became a Jain monk. Nemi eventually became Neminatha, the 22nd Jain Tirthankara.

Gandhi turned ahimsa from a spiritual tool for karmic cleansing to a political tool for social justice. Now those who oppose Gandhi’s ideologies are turning ahimsa into a tool of oppression. Like missionaries who wanted to save souls, they want to save animals, display their compassion by making sure no one eats meat, or chicken. Beef ban was just the beginning. Milk, egg and honey may shortly be banned. Never mind that millions of rats are killed to protect vegetables, fruits, grains and cereals. Rats don’t matter, I am told. Ganesha, are you listening?