The rise of Kali 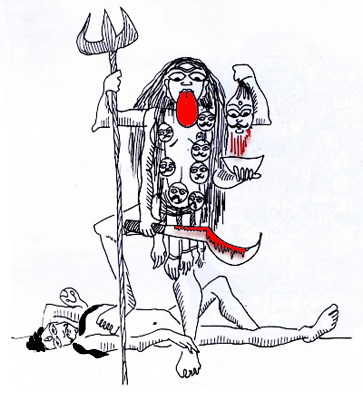 India has been a land of adjustments and accommodation. We keep making room for new ideas and including different thoughts. This can make us very inefficient but also very tolerant. Nowhere is this more evident than in observing how perceptions of gods and goddesses changed over time.

The Jaiminya Brahmana dated around the 8th century BC tells the story of one Dirgha-jihvi. “Dirgha-jihvi or ‘the long-tongued one’ used to lick up the divine drink, Soma, produced during the yagna that was much loved by the gods. Exasperated by her actions, Indra, king of the gods, wanted to grab her, but he could not get hold of her. So he said, ‘Let no one perform any sacrifices at all, for Dirgha-jihvi licks up the Soma produced.’ Now, Sumitra, the son of Kutsa, was handsome. Indra said to him, ‘Go seduce Dirgha-jihvi.’ When Sumitra approached her, she said, ‘You have just one organ, but I have many, one on each limb. This won’t work.’ Sumitra went back and informed Indra of his failure. ‘I will make organs for you on every limb,’ said Indra. Equipped with these, Sumitra went back to her. This time she welcomed him with open arms. They lay together. As soon as he had his way with her, he remained firmly stuck in her.  Finding the ogress pinned to the ground, Indra ran to her and struck her down with his thunderbolt.

It is speculated that Dirgha-jihvi refers to Kali-like goddesses worshipped by agricultural communities, who were probably matriarchal, who came to be feared by patriarchal nomadic communities. A century or two after the Jaiminya Brahmana, the Vedic priests put together the Mundaka Upanishad where Kali is the name of one of the seven quivering tongues of the fire god, Agni, whose flames devour sacrificial oblations and transmit them to the gods.

Between the 2nd century BC and 3rd century AD, Kali appears unequivocally for the first time as a goddess in the Kathaka Grihyasutra, a ritualistic text that names her in a list of Vedic deities to be invoked with offerings of perfume during the marriage ceremony. Unfortunately, the text reveals nothing more about her.

In the Mahabharata and Ramayana which were being composed around this time, goddesses, including Kali, are given more character: they are usually independent and (hence?) wild, appearing as manifestations of divine rage and embodiments of the forces of destructions. In the Mahabharata, for example, the nocturnal bloodbath by Ashwattama at the end of the 18-day war, when the innocent children of the Pandavas are slaughtered rather dastardly while they are asleep, is seen as the work of  “Kali of bloody mouth and eyes, smeared with blood and adorned with garlands, her garment reddened, — holding noose in hand — binding men and horses and elephants with her terrible snares of death.”

In the Devi Mahatmya, dated roughly to 8th century AD, Kali became a defender against demonic and malevolent forces and by the 19th century, Kali was a goddess of mainstream pantheon, a symbol of divine rage, of raw power and the wild potency of nature. The one who was once feared as an outsider had made her way right to the heart of the mainstream.