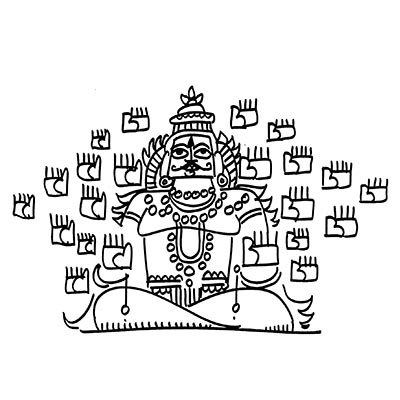 It is usually the Right-wing fundamentalists who raise the issue of Hindu-phobia (hatred of all things Hindu), but no one takes them seriously as they have a habit of being oversensitive opportunists and making a mountain of a molehill. In fact, any one who talks about ‘Hindu-phobia’ is at risk of being branded ‘saffron’. And thus the conversation is gagged.

But in the wake of the victory of the BJP at the parliamentary elections, and the fear psychosis that has gripped many ‘liberals’ in social media, it is important to talk about it just as there is merit in talking about homo-phobia (hatred of gay and lesbians) and Islamo-phobia (fear of Muslims) amongst the Great Indian Middle Class which now has to be taken seriously.

In India, we do not really experience Hindu-phobia as much as the majority of the population of India is Hindu. Also because in India, it is very difficult to separate the religious from the cultural. Is a sari, for example, a religious uniform or a cultural expression? Pakistani political leaders, I am told, discouraged women from wearing sari as it was religious. Television channels today discourage women from wearing a sari so that they look more secular.

Hindu-phobia is slowly rising amongst people who want to prove they are liberal and secular. You see this is in advertising on Indian television dominated by young people who are obliged to appear hip and hence disdainful of all things religious or even cultural. In fact to be either is to be ‘downmarket’ only meant for soap serials. Take a look at one of the many ‘Happy’ videos of Pharell Williams, the one that is based in Mumbai, and you will be confused if it is Mumbai or Brazil.

But Hindu-phobia is most evident when you travel to other parts of the world and find how Hinduism is projected. This is mostly because the benchmark for all religious activity internationally is either Christianity or Islam and so many Hindus do not know how to explain why to be Hindu you do not need Church/Mosque, baptism/circumcision, Sunday/Friday prayers. It becomes even more difficult to explain the multiple expressions of divinity, which may even include animal and plant forms. Most Hindus abroad never really studied Hinduism when they were in India. They are mostly ambitious economic migrants who are at their wit’s end when it comes to explaining what it means to be a Hindu to their neighbours, or to their children. Hindu diversity adds to the complication. This makes them rather defensive or apologetic or indifferent. So many turn to the Right-wing who seem to be the only one addressing their problem.

Things are further complicated by well meaning but naÃ¯ve (and occasionally polemic) Western academicians. They research scriptures that average Hindus do not read and so dig out ideas that seem alien to the practicing Hindu. They say things like ‘Hindus worship the male penis but are in denial of this’ or ‘Gita is a dishonest and confusing book that is perpetrates caste hierarchies’. Their Universities and students (Indians included) are convinced such academic analysis is correct as ‘the book says so’ not realising that Hinduism is not based on any book but on local beliefs and customs that may not be pan-Indian. This adds to confusion, and the sense of persecution prevalent amongst many NRIs.

Like all phobias, Hindu-phobia has roots in ignorance and fear. Very rarely is it of the psychopathic variety for which there is no reason, hence no cure. Awareness of Hindu-phobia and addressing it gently does not make anyone ‘saffron’. And even if it does, so what — its all part of the diversity rainbow flag.