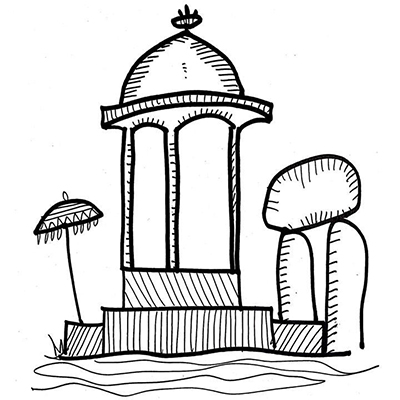 When a Rajput king dies, his bones are collected after cremation and cast into the river, as is common practice amongst many Hindus. Additionally, the spot where he is cremated is marked by a gazebo popularly known as chhatri (umbrella), so that dogs and commoners may not trespass on the land and insult his royal majesty, and people may marvel at the royal legacy.

Across Rajasthan one finds such umbrellas and umbrella complexes. Some even look like temples, until one realises that there is no deity enshrined there, just a memory. As per Rajput lore, this umbrella was given first to Rajputs by Krishna himself, who brought it down from Indra’s realm of Swarga, as the king of devas lacked the royal quality of generosity.

The oldest Rajput umbrellas are dated to 15th Century. These grand chattris were most probably influenced by Delhi Sultans and Mughals who built gigantic mausoleums to their fathers and mothers. The first mausoleum to be built on Indian soil is Sultan Ghari, in Delhi, in 12th century, for the Nasiruddin Mahmud, the eldest son of Shams-ud-din Iltutmish. Muslims also built dargahs around the mazhars where holy men (pir) were buried.

But, uncomfortable with suggested Islamic influence, many insist that Rajput shrines are a continuation of an earlier practice of raising Devalis, or hero stones, in memories of great warriors who died saving land and cattle. Over them were raised pavilions made of perishable material like mud and wood. These could probably be continuation of ancient pre-historic practices of building roofed stone structures known as “dolmens” at the site where the dead are cremated or buried; this are found across South India. That practice perhaps also gave rise to Buddhist practice of raising stupas around relics of great teachers and monks.

Memorial building is contrary to Vedic practice of not letting the memory of the dead linger in the land of the living. The recently dead (preta) needs to cross the River Vaitarni and reach Yama-loka and reside there as an ancestor (pitr), until it is time for rebirth. Memorials hold them back. And so, Hindu kings traditionally avoided building memorials.

There is some reference to Chola kings of Tamil Nadu building Shiva temples over royal burial sites in the 11th century. Burial in South India was once widely prevalent, but is now avoided amongst those who consider themselves as followers of the Vedic path. Some communities, such as the Lingayat, continue burial practice, arguing that their guru ensures they are not reborn, which is why their dead do not need the Brahminical rites of fire and water that facilitate rebirth. Many Hindu gurus are not cremated, but buried in seated position, covered with salt, with tulsi plants marking the burial site, because it is believed they are not dead—they have simply abandoned their body voluntarily.

Like all things Indian, there may be multiple intellectual, political and spiritual tributaries of this very unique material practice seen only in Rajput lands. This practice of raising memorials is now followed by many Indian political parties. We find “samadhis” at the spot where Mahatma Gandhi, Nehru, Lal Bahadur Shastri and Indira Gandhi, Jagjivan Ram were cremated and turned into political tourist spots known as Raj Ghat, Shantivan, Vijay Sthal, Shakti Sthal and Samta Sthal.