The Queer in Ramcharitmanas 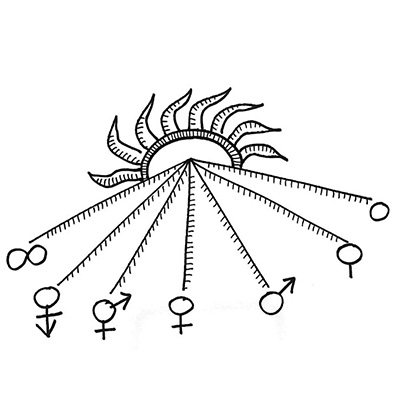 There is an oft-quoted line in Tulsidas’ Ramcharitmanas, ‘Dhol ganwar shudra pashu nari sakal taadan ke adhikari.’ Its translation has been the subject of great debate. The most common translation has been, ‘Drums, buffoons, servants, animals and women are deserving of reprimand.’ It has been used to indicate the feudal nature of Hinduism. Naturally, there are many who oppose it.

The accusers are often commonly grouped as Left Wing while the defenders are grouped as Right Wing. The Left sees itself as ‘accurate’ and calls the Right as ‘deniers’ and ‘apologists’. The Right sees itself as ‘misunderstood’ and the Left as suffering from ‘saviour-complex’. Academia and media tends to lean towards the Left, though currently many are questioning the excesses of the Left, and are turning Right. The Left would like to believe that everyone on the Right is a goon. And the Right would like to brand everyone on the Left as anti-national (after cleverly turning patriotism in India into a code for Hinduism). And so, the battle lines are drawn.

And in this shrill battle, where everything becomes a courtroom drama before a live camera, complete with accusers and defenders, scholarship is lost. The line is spoken by the sea-god, Varuna, when Ram demands he make way for him to go to Lanka. Varuna apologises for behaving as a ‘drum, buffoon, servant, animal and woman,’ and so accepts Ram’s reprimand, while reminding Ram that everyone has to stay in their place in the world, within boundaries, which means even the sea cannot change its rules for God.

Did the poet Tulsidas endorse feudalism and the beating of servants and women? Are these lines meant for a particular section of 16th century Hindi-speaking belt in the Gangetic plains, or for all Hindus? Are they instructions or reflections? These are matters of opinion. And can be debated forever, long enough, to earn doctoral degrees and a place on television shows. The reality is: poets, like people have opinions, which are not always politically correct. And that is okay, except to those who wish to gag free speech in the name of ‘justice’.

The same text has another line that is not quoted with the same frequency. In the final chapter (7.87ka), when Ram tells the crow, Bhusandi, ‘Purush napunsaka nari va jiva charachara koi, sarva bhaav bhaja kapat taji mohi param priya soi.’ Translation: ‘Men, queers, women, animals or plants, who approach me after abandoning malice, are beloved to me.’ Here, God is making himself accessible to all, even the ‘queer’ (napunsaka). Why does the Left or the Right not quote this? Is it because it challenges the ‘Hinduism is feudal’ paradigm of the Left? Is it because it challenges that ‘Queers are not part of Hinduism’ paradigm of the Right?

These two verses give two very different views of Hinduism. The former makes Hinduism feudal and hierarchical. The other speaks of Hinduism as accessible and open to all. It does not render invisible the queer community, as post-Independence India had. Which is ‘true’ Hinduism? Which one do we choose? Does our politics influence our choice? Does our choice influence our politics? Do both exist, providing a force and counterforce to an ancient culture? Both people on Left and Right need to ponder, before they return to their shrillness.