The pillars of gods and kings 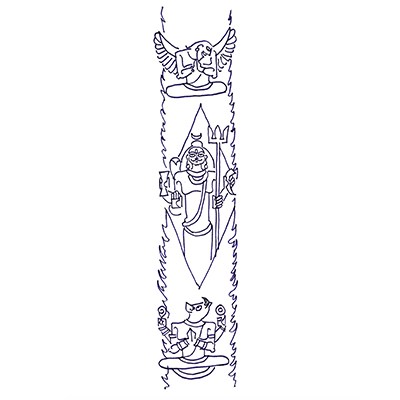 The Rig Veda refers to giant houses with many pillars. However, we have no archaeological evidence of them, because the material used was probably wood. In the Atharva Veda, we hear of the stambha, or pillar, that separates Heaven and Earth. Even today in traditional Hindu temples, a pillar stands in front of the temple, either for the flag, or for lamps, or to simply assert divine authority.

Pillars have played a very important role in cultures around the world to reflect both religious as well as political ideas. Some of the earliest pillars of the world are found in Egypt, where they are known as obelisks. They are clearly of religious significance as they are placed before temples. They embodied virility of the God-king that ensured prosperity of the land. The earliest political pillars are found in the Middle East; they were set up by Persians kings.

It is believed that under Persian influence, Ashoka set up India’s first pillar commemorating his kingship. Legend has it that Ashoka built 84,000 pillars to mark the 84,000 relics of Buddha in different parts of India. Only a few of these survived with his edicts. These functioned both in a religious as well as a political capacity. These were free-standing pillars, unlike pillars that hold up the ceiling of a house. They were topped by images of royal symbols such as the lion, the bull, the horse or the wheel.

India’s first purely religious pillar is around 1,900 years old. Called the Garuda Pillar, it is in Vidisha, Madhya Pradesh, and was built by a man called Heliodorus, who was the Greek ambassador to the Shunga kings. Then there is the delightfully brilliant Iron Pillar, built by Chandragupta I, of the Gupta Dynasty, nearly 1,600 years ago. It stands in Delhi. What is unique about it is that, although it is made of iron, it has not rusted over time.

There are temples in India, especially in the south, like the Madurai Meenakshi, which have thousand pillared halls. Besides being exquisitely carved, many of these pillars also make various musical sounds. Every temple today has a Dhwaja Stambha in front of the sanctum sanctorum or the Kirti Stambha. These are also found in Jain temples, often topped by images of gods who salute the Jain Tirthankaras.

It is important to mention how the idea of the pillar as a symbol of power was exploited in Puranic stories. Pillars establish the idea that God is greater than any king. They also connect kingship with divinity, for in ancient architectural manuals, it is clear that the house of God is also the house of the king. Early temples were not distinguished from royal palaces. As Puranic Hinduism established itself in India over the last 2,000 years, the story of Shiva’s pillar and Vishnu’s pillar was retold.

Shiva’s pillar is made of fire. Its beginning and end cannot be seen. Brahma took the form of a swan to find its top and Vishnu took the form of a boar to find its base. Both were unsuccessful. The pillar becomes the ultimate axis mundi, or the centre of the world, connecting the three worlds together. Every Shiva linga is considered a diminutive double of this cosmic, infinite pillar. In many Shiva temples such as those in Ujjain and Trimbakeshwar in central India, we find Deepa Stambha, or the Pillar of Fire, where a thousand lamps are lit to recreate the primal pillar of fire that was first seen by Brahma and Vishnu.

In the Vishnu Purana, the arrogant asura king, Hiranyakashipu, refuses to believe that God is everywhere. Hiranyakashipu smites a pillar of his palace. Vishnu emerges from the broken pillar, in the form of a man-lion, Narasimha, and kills Hiranyakashipu. In this story, the power over kingship is clearly established. God is greater than an earthly king, being able to break the pillars that kings set up to declare their royal authority.

In modern times, we see pillars being replaced by statues to establish political power across the country. When we see these statues, it is time to remember the story of Shiva and Vishnu and humbly realise that, no matter how powerful human beings may be, there is, always, a power above them that can stretch to infinity and shatter any proud pillar to smithereens.