The nymph and the hermit 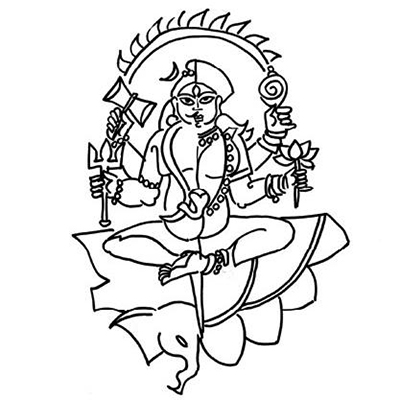 To be or not to be celibate is an important concept that emerged in India, and, although it is attributed to Buddha, it is perhaps an older concept that existed even during the Vedic times, when there is reference to narcotic-drinking hermits, who stayed away from the material world.

The most visible form of connecting with the material world is the sexual act. The story of Vishwamitra and Menaka draws attention to the relationship between asceticism and worldly life, between spiritualism and materialism. The celibate man, who withdraws from the world, is the hermit, he of the controlled mind. The hedonistic man, who succumbs to the temptations of the damsel, is a householder, he with a mind that has lost control.

Must this visualisation be taken literally or symbolically? Vishwamitra can be seen as a man, or the symbol of the mind that can choose to either engage with the material world or withdraw from it. Likewise, Menaka can represent the woman, or the material world, full of pleasures and stimulations.

The tension between these two views has manifested into a breakdown of relationships between men and women, especially in ascetic traditions, with women being projected as temptresses. It has led to the belief that spirituality and materialism are incompatible.

Others, however, argue that ultimately the male and female forms merge – as represented by Shiva’s Ardhanareshwar and Vishnu’s Mohini. At a high transcendental level, then, the spiritual and the material combine, that we rise above gender divides. But, this latter thought of equating male and female, materialism and spirituality, world and wisdom, is seen as radical, not mainstream.

In the Dharmashastras, we see greater value being placed on marriage. Celibacy was only recommended after the completion of household duties. There is the story of Agastya, the hermit who is tormented by dreams of his ancestors or pitrs, who are hanging upside down in a dark cave and may fade into oblivion, unless Agastya produces a child. Thus, a case is made for marriage and children. A similar story is found in the Mahabharata, in which Bhishma refuses to produce a child, and, therefore, is condemned to a hell called Put, meant for people who do not produce children. The ritual of shraadh that Hindus perform is essentially a pact in which men promise their ancestors that they will father children, hence facilitating their rebirth. In Puranas, good things happen only when Shiva marries the goddess; bad things happen when Shiva shuts his eyes.

Buddhism generally was opposed to marriage and the householder’s life. This model was popular in Jainism, too, which differentiated between the monks, the sramanas, and the layfolk, shravakas. We can see this Jain influence on Hinduism today, in which increasingly, the Mahant lobby is considered to be the spiritual leader over the household communities, where women perform rituals. Therefore, many gurus who wear saffron robes, who have no families, are considered superior to householders who are married. This standard, where monks are superior to layfolk, is now manifesting itself in politics. Women are still seen as temptresses who need to be kept in check through marriage and maternity.