The Myth of Property 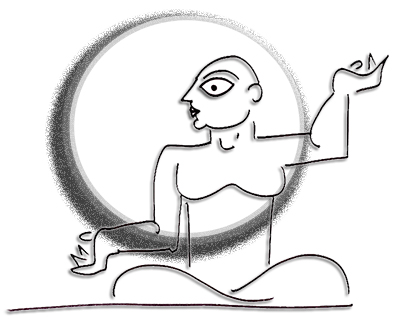 The idea of property has a close association of our sense of self, our ego – Once upon a time there was the sage who possessed nothing in the world except a piece of cloth that he tied about his waist. One day as he was walking down the road, the cloth got stuck on a thorny bush and it pulled away from his body. As he was about to catch the cloth to hide his nakedness, the sage asked himself, “Isn’t the act of holding onto the cloth attachment? As a hermit have I not renounced the world? By holding onto the cloth does it not mean that I still cling to certain material possessions? Am I then a true ascetic?”

As this realisation dawned on him, he let go of the cloth. The cloth remained on the thorny bush and he became a naked ascetic.

This story comes to us from the Jain traditions and it speaks of the Digambar, or the sky clad monk. The one who has no clothes because he has given up attachment to all things.

This draws our attention to the notion of property. Humans are the only creature who have the concept of property. Animals have territory. They fiercely defend their foraging and hunting grounds from rivals to ensure their survival. However, they are not able to bequeath it to their children. Animals do not inherit property, they must fight for it. The strongest wins. There is no concept of justice in the jungle, no law, no regulatory body.

Humans, however, have constructed the idea of property. A land can belong to an individual or a community and this creates the concept of possessive pronouns, such as mine, yours, his, hers, theirs, and most conflicts happen because of the tensions between what I consider mine and what I consider yours. Thus the idea of property has a close association of our sense of self, our ego.

This notion of property is maintained either through force or by a regulatory authority. For example, the lands of American and Australia were claimed by European immigrants by sheer force. Later, authority over the land was established by Royal Decree and then by the governments established. It completely invalidated reclaim of land by the indigenous tribes who had lived there for thousands of years. This has led to a great conflict and a deep sense of injustice amongst indigenous communities around the world.

In modern society, the right to property is a natural law that is essential to human civilisation. Tribal societies usually do not have the right to individual property, there is collective property. Property belongs to a community and not to an individual, but this creates huge issues, especially when people try to buy tribal land and the land belongs to the whole community and not to any particular individual.

The notion of property is the greatest myth of human civilisation. It is a fiction that everyone believes in and so is now seen as ‘fact’. It is not a natural phenomenon but a cultural concept enforced by various forces that benefit the members of a society.

Human beings have always wondered what happens to them after death, and property allows a kind of an illusion of immortality. One tends to believe that even though what one is dies, what one owns survives mortality. This gives property a great importance and therefore people build a lot of property and put their names on it which will carry on even after their death. It creates legacy.

In some oldest societies, property was established by burying the dead in the claimed land. By declaring that ancestors were buried in the land, tribal societies affirmed their right over it. Tombs are thus built to establish ownership on a piece of land. In societies that denounce the idea of property and valued detachment from property, mortal remains were not buried but cremated, and the ashes thrown in the river, indicating that one did not have ownership on any piece of land.

Without the myth of property, human civilisation perhaps cannot exist. It is the fundamental myth of cultures and this plays a key role in the Ramayana and Mahabharata where we continuously see property disputes, between brothers like Vali and Sugriva fighting over Kishkinda, Ravana and Kuber fighting over Lanka, Pandavas and Kauravas fighting over Kurukshetra. This conflict over property defines human society, for most human beings identify their own worth with what they possess. If you think property is truth, then know that you are trapped in myth, or delightful realm of what Hindu sages called maya.