The myth of giving 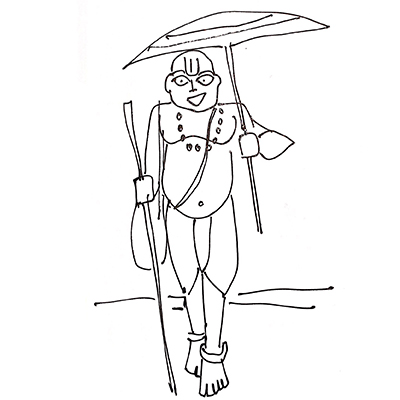 Once upon a time, there was an asura called Bali, also known as Mahabali, who conquered the three worlds, and was famous for his generosity. Nobody remembered Indra, king of the celestial regions, who had been driven out of his kingdom by Bali. So, Indra begged Vishnu to deal with this problem, and restore his kingdom back to him. Vishnu took the form of a dwarf, Vamana, and asked Mahabali for three paces of land. Mahabali laughed at this minor request and granted it without a second thought. The dwarf then suddenly transformed into a giant, and with two paces, he claimed the sky, the earth, and all the possessions that Mahabali had. Vamana then asked him where should he take the third step. The only thing Mahabali had left was his body. So he told Vamana to step on his head. Vamana did so and shoved the asura-king underground to Patal, where the asuras are supposed to reside.

Mahabali, however, was granted a wish to visit earth once a year, to meet the people who loved him very much. His arrival is marked by fertility festivals like Onam in Kerala and Diwali in North India.

In the 19th century, however, this story was interpreted much differently. It was a time of British rule, Hindu reformation and of rising Marxist ideas. Social reformers like Jyotibha Phule interpreted the Mahabali story as proto-history by observing how Mahabali was treated differently in Brahmin and Dalit households. Many concluded that Mahabali was a Dravidian king who brought prosperity to his people. Vamana was linked to the cunning Aryan Brahmins who came from the north and destroyed the age-old secular order, and imposed a caste system that turned Brahmins into masters of the land, and peasants into Shudras and Ati-Shudras . This interpretation is extremely popular, even today. Most communists believe Hinduism is an oppressive system, imposed by the powerful to exploit the powerless and seek a restoration of the old egalitarian order of Mahabali.

This interpretation of the story seems reasonable and rational. It works, but only if you follow the ‘hermeneutics of suspicion’. This means it is a postmodern method of analysis that looks at all religious thought as a force meant to create patriarchy and feudalism. This approach is extremely popular amongst Left-liberal academicians and activists. It, however, is inadequate. Myths can be interpreted in many ways.

Puranic stories emerged as a challenge to Buddhist Jatakas. Buddhists and Brahmins were rivals when it came to royal patronage. Buddhists sought bhiksha from the king and in exchange offered spiritual merit. Brahmins sought daksina, or service fee, and propagated daan, unconditional charity with detachment, which does not grant merit.

The Brahmins argued that the Buddhist practice of offering merit (punya) to charitable people in exchange for bhiksha would make the receivers more and more dependent. It would turn the Buddhist Sangha into parasites who would live on the generosity of kings and eventually destroy them. Instead, kings should employ Brahmins and give them dakshina as fees for service rendered, or simply give daan without seeking glory or merit.

Puranas identify themselves as vehicles communicating Vedic ideas. The Brahmanas, Aranyakas and Upanishads, are concerned with the tension between hunger and food. Hunger is insatiable, but food is limited. So how much hunger can Mahabali satisfy with his generosity. Demand will always outstrip supply. Mahabali’s arrogance at being able to make everyone happy is thus shattered. Similar stories are told in Shiva Puran, where the wealthy Kubera is warned against indulging in hunger through charity. The Puranas promote outgrowing hunger instead and making the journey from being dependent on charity to being independent and autonomous.

In Hindu metaphysics, the concept of debt is very important. Everyone who receives bhiksha is bound by debt. He is now obliged to repay his debt. And the giver is obliged to receive repayment. Thus bhiksha ends up binding the receiver and the giver to the material world (samara). Such fettering is absent in dakshina and in daan. Daan teaches detachment and outgrowing expectations. Daan encourages paying things forward.

When anthropologists first wrote on yagna, in the 19th century, they described it as a sacrifice, in keeping with Christian ideas of votive offering to ‘appease’ a jealous and all-powerful God, as in the Biblical tale of ‘Binding of Isaac’. But in the 21st century, scholars admit they were wrong. Yagna, like most tribal practices, is based on ‘exchange’, hence the idea of debt is integral to understand Hindu stories. Vishnu’s avatars are closely related to the idea of kingship, and the king’s role in dharma, reversing ‘law of jungle’. In the jungle, the strong grab. Yagna seeks to reverse this culture of grabbing. Such a reading of the Puranas is the very opposite of the Marxist claim that Brahmin scriptures seek to establish ‘law of the jungle’. It challenges the ‘hermeneutics of suspicion’, popularised by atheist academicians who refuse to see anything redeeming in religion.