The metaphor of the forest 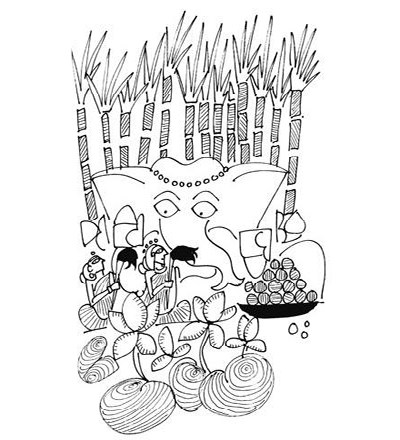 To understand Hindu mythology, it is critical to understand the metaphor of forests. Forests represent the default wild world, where might is right, where strong prey on the weak; while culture represents the world, where the forest has been domesticated, where might is no longer right, and the strong take care of the weak. In fact, the transformation of human settlements into civilisations is seen as the journey from the desire to dominate and be territorial, like an animal, to a space where the mighty help the meek and even the helpless can thrive.

In the Rig Veda, the forest is associated with a goddess called Aranyani, who is described as wearing anklets and is a dancer. She is never seen, only heard. One wonders how she lives so far from human settlement and can feed all manners of living creatures without ever having to till the soil. This is the first understanding of the forests that we find in Hinduism.

In the epics, Ramayana and Mahabharata, forests play an important role. Ram goes into an exile for 14 years and the Pandavas go for a 13-year exile. It is in this time that they are exposed to a world without kings. The king in Sanskrit is called ‘raja’ and a world without kings creates ‘a-raja-kta’ or disorder, where the weak are at the mercy of the strong. Ramayana and Mahabharata thus become epics that try to present the idea of dharma that must be established by kings, an ecosystem in which the law of the jungle has been overcome.

There are references to enchanted forests, where only women reside and any man who enters becomes a woman himself. Only men who have complete control over their senses, the yogis, can enter it.

A forest is, in a way, a space where there are no rules or regulations, no bondage, and where everything is fair — so long as you survive. It is a place of natural justice and not social justice. It is the place of food chains, pecking orders, herds and packs, and of territories established through violence. It is a place where everyone must take care of themselves and no one comes to anyone’s rescue. This sounds increasingly the direction that modern society is taking, doesn’t it?

This article is also listed under Puranas, Ramayana, Shiva