The Lore of Weavers 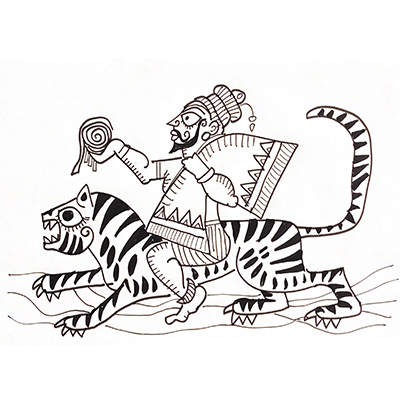 Weaving is a very unique human activity. Animals don’t wear clothes, humans wear clothes. The earliest clothes that humans wore were skins of animals. Gradually, it was the bark of plants, and leaves. Later, fibres of plants were gently woven. Eventually, humans discovered the fine art of weaving, the wool of sheep and cotton from plants. The fabric was then dyed in bright colours. A whole industry emerged.

There are many mythologies about how clothes came to be spun. In Roman mythology, we hear of a lady called Arachne who wove so well that she declared she was greater than Minerva, the goddess of all skills. Minerva got very angry and cursed Arachne to turn into a spider who weaves a web in order to survive.

In India, the greatest weavers at one time were the Padmashali community in South India, in Andhra Pradesh. In their folklore, we learn that Markandeya was destined to die at the age of sixteen. However, he was saved by Shiva. In exchange for his life, he instructed his son, Bhavana, to weave clothes for the gods. Thus, was created the ancestor of all weavers.

Bhavna Rishi collected the first thread from the navel of Vishnu himself. He then created a beautiful piece of cloth with which he dressed the gods. However, Shiva refused to wear this as the cloth would get damaged over time; he wanted something more permanent. So Bhavna went in search of a suitable garment. He then met a goddess who gave him a tiger who shed skin when ash was thrown on him. Bhavna went to Shiva and gave him the miraculous tiger, Shiva was very happy to receive the tiger skin to wrap around his body. Bhavna Rishi thus clothed all the gods, for some cloth and for some animal hide.

These stories are linked to memories of ancient fabrics in ancient times. Besides a sacred function, weaving has often been used as a metaphor for various philosophical ideas. The heddle and harness of the loom are considered to be the principles of life: spirit and matter, in the tantric traditions, for example.

In Puranic art, the naked goddess Kali represents wild nature while the clothed goddess Gauri represents domestic culture. The naked Shiva, by contrast, represents the hermit tradition, while Vishnu, draped in silk, embodies the householder tradition. In the epic Ramayana, Arundhati gives Sita a fabric that will never get dirty in the forest. In the epic Mahabharata, disrobing is a sign of humiliation. The Pandavas disrobe when they lose their kingdom; Draupadi is forcibly disrobed in public to humiliate the Pandavas. In mediaeval folklore, we hear of fine fabrics woven in India that can pass through a ring and are so transparent that those who wear it appear naked, shocking onlookers.