The Laws of the Jungle 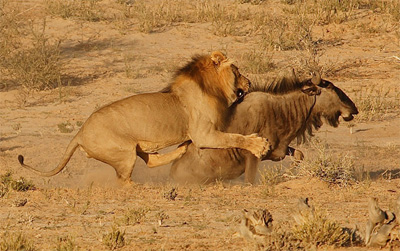 One day, states the Bhagavat Puran, the earth-goddess took the form of a cow and went to Vishnu with tears in her eyes complaining how the kings of the earth were exploiting her. Her udders were sore, squeezed by human greed. Vishnu promised to set things right and so descended on earth as Krishna.

In the Mahabharat, however, Krishna advises the Pandavs to set a forest aflame. This forest, Khandavprasth, is the share of property given to the Pandavs by their uncle when they demand their inheritance. As the trees burn, the animals and birds of the forest try to escape. Krishna instructs Arjun to circle the forest on his chariot and shoot down every escaping bird and beast down. Hundreds of animals are thus massacred. The rest roasted alive. The serpents beg the rain-god, Indra, to come to their rescue. But again, on Krishna’s advise, Arjun uses his arrows to create a canopy over the forest preventing the water from dousing the flames. None are spared except an Asura called Maya on condition that he build for the Pandavs on the gutted land a magnificent city called Indraprasth, which goes on to become the greatest city in the world.

On one hand, Vishnu promises to protect the earth from humans; on the other hand Krishna himself indulges in an activity that damages the earth. What is happening?

These two stories draw attention to the nature of human civilization and one unspoken aspect of leadership and organization: the power of authority.

Nature is intrinsically wild — wanting to go in its own way. Nature’s order is created through the game of survival. Every creature is on its own. Through strength or cunning, every plant and animal can make their own space. Those who are unable to withstand the opposition or exploit the opportunity wither away and die. Nature is thus generous on one hand, giving total freedom and all possibilities to the mighty and indifferent on the other, offering no help to the meek.

The human mind rejects this state of being. Humans have the power to reorganize the rules of nature so that life becomes more predictable and secure, and one can look beyond survival. When Pandavas declare their intention to become king, they are essentially saying they are unwilling to accept the natural state of things. They wish to domesticate nature so that all creatures align to a set of rules — their rules. This means destruction of all other rules and laws.

Nature has two parts: the mind (internal nature) and the forest (external nature) — both need to be tamed. The king ensures that the mind of his people is disciplined and aligned to his way of thinking and performing through logic, reward, punishment and constant coaching. The trees and creepers of the forest are destroyed to make way for fields and orchards where only the seed chosen by the king is planted. All other plants that attempt to grow on the king’s land are declared weeds — to be pulled out and cast away. A culture is born where it is clear what is acceptable and what is not, what is right and what is wrong. The benchmark of such judgments is laid down by the king.

From one point of view, a king and leader is doing a good thing. Creating resources and opportunities for his people by laying down the law but on the other hand he is curbing freedom or at least controlling it. A king has no choice but to tread this delicate line.

Typically, the story is narrated to extol the virtues of the king Ushinara’s kindness and sacrifice. But there is an underlying wisdom in this story. In nature, hawks eat doves. By introducing the human virtue of kindness into the natural law, the king could not make both the hawk and the dove happy. Either the dove had to die or the hawk had to go starving. Since neither was acceptable, the king had to die. If kings have to thrive then someone will benefit and someone will suffer. The King’s authority cannot make everyone happy — either the animals will thrive or the city will be built. This tough lesson is taught to the Pandavas when the forest of Khandavaprastha is burnt to make way for Indraprastha.

That being said, the scriptures repeatedly tell the story of Vena, a king who so excessively plundered the earth, that the sages were forced to kill him using a blade of grass that they transformed into a potent missile using magical mantras. Then the king’s corpse was churned. All negative aspects of the king was cast away and a purer, more noble king, Prithu was created. The gods declared Prithu the new king by giving him a bow. The earth, still reeling under the impact of Vena’s reign, refused to let the seeds sprout and the plants flower and bear fruit. Taking the form of a cow she ran away and Prithu chased her on his chariot, his new bow in hand. “If you kill me, all life will end,” said the earth-cow. Prithu then lowered his bow and begged the earth to feed his subjects. He promised to be a king who treats the earth as a cowherd treats a cow. He will love her, protect her, nurture her. In exchange she will provide milk and dung that will be the food and fuel of human civilization. She will be Go-mata, the cow mother, and he will be Go-pala, the cow keeper.

Thus Prithu realizes the bow was given to him by the gods not to hunt the earth down or to domesticate her and strip her of her wildness but to learn the importance of balance. A bow is useless if the string is too loose; it will break if the string is too tight. Likewise, a king has to balance — his desire to control and domesticate nature with the wisdom to let nature be and thrive freely. A good king knows when to stop: how much of the forest should be burnt and how much should not. How much alignment he should seek and how much freedom he must give.