The laughter of women 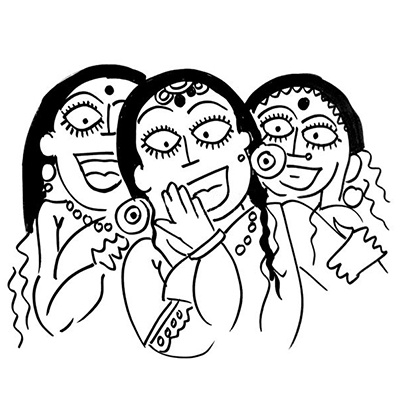 In Kalidasa’s works we hear descriptions of women being invited to the king’s garden to sing, dance, play and laugh. The laughter of women, it was said, would make the trees burst into flowers. Their laughter was an expression of their sense of security and happiness. It was captured on temple walls, and borders of Buddhist stupas. It created a ring of positive energy, keeping out the negative.

Not many people know about this ring of laughing women today. But many do know about the sinister turn resulting from a woman’s laughter in the epic Mahabharata.

Draupadi laughs when she witnesses Duryodhana slip and fall into a pool. She exclaims, “The blind son of a blind king.” Duryodhana feels so humiliated that he vows to humiliate Draupadi in public one day. This story is repeated again and again. The idea of a woman laughing at a man is seen as the most humiliating act, enough for justifying her abuse in public. Women can laugh, but not at men.

In the oral traditions of the Nath-sampradaya, we hear the story of a princess called Mainakini of Sinhala-Dvipa who once looked up at the sky and saw a celestial being on a flying chariot. The wind caused his clothes to slip from his waist, and so she could see his genitals from below. So, she burst out laughing. The deity saw her and realised she was laughing at his genitals. Embarrassed and humiliated, he cursed her that she would have to spend the rest of her life in Triya Rajya, or Stri Rajya, the land of women where she would have no access to men, and hence no male genitals that would make her laugh. In both stories, women who laugh are cursed.

Laughter strips the object of laughter of power, and gives power to the one who laughs. Durga knows this when, in the Devi Purana, she enters the battlefield and laughs at the sight of Mahisha and his asura army.

When stand-up comics make fun of someone or something, their jokes are, in effect, criticism and mockery, highlighting a social issue or a family reality. The audience rolls on the floor laughing as attention is drawn to the habits of various ethnic groups, politicians, spouses, children, immigrants, foreigners, girlfriends, boyfriends. The one who laughs feels powerful and happy.

The one who is laughed at is told to take a joke. However, not everyone can take a joke, and its underlying psychological violence. A joke can hurt, humiliate, embarrass. Some retaliate. Demand a ban on jokes. No more Sardar jokes. No more jokes on gay people or lesbians or black people or Trump or religion or Americans or women. Anger is amplified when a woman cracks a joke. Hence, the common refrain: women stand-up comics are not THAT funny.

The ancient clowns, the vidushakas of Sanskrit plays, knew the violence of laughter. And, so, went out of their way to make fun of themselves, painting their faces with bright colours and wearing silly clothes, reducing themselves to a joke, to reassure the object of laughter. Many modern comics don’t care as they believe that the freedom of expression is freedom to mock. They do so at their own peril in kingdoms where the king has no sense of humour.