The invisible violence of vegetarianism Many people are of the opinion that eating vegetarian food is indicative of kindness and non-violence. That is not so. Ask the bull, or rather the bullock.

A bullock is a castrated bull: a bull whose testicles have been cut so as to deprive him of male hormones that make him untamable and violent. In other words, a bullock is to a bull is what a eunuch is to a man. Gelding and neutering and banding are nicer words used instead of castration. It’s a brutal procedure, carried out all over the world, as can be seen in a YouTube video showing a bull being neutered in a farm in rural Cambodia. In developed economies, like the US, the same thing is done using instruments that cause minimum pain. But the end result remains the same – the bull’s scrotum (the bag containing testicles) falls off.

Indian civilisation owes a lot to the bullock. For 5000 years, maybe more, bullocks have been used in the Indian subcontinent to plough fields and pull carts, enabling the production and transport of grains, pulses, fruits and vegetables. Bulls were known and venerated in the Indus-Saraswati civilisation. Their image has been found on clay seals. Clay carts found in the archaeological sites indicate that they knew how to castrate aggressive bulls and turn them into docile bullocks. In Vedic times, men displayed their strength and agility by fighting or dancing with or leaping over aggressive snorting bulls. In the Bhagavata Purana, there is a reference to Krishna, the divine cowherd, overpowering seven wild bulls, to win the hand of the princess Satya in marriage. Such festivals are still in practice in many agricultural communities though animal right activists have sought to ban it.
Unless castrated, a bull cannot be used as a beast of burden. Castration has very much been in the news lately. Some judges in India believe that the threat of castration is enough to protect children and women from sex abuse: so deep is the fear of castration in the male psyche. Most men consider it a fate worse than death.

Once castrated, a bull cannot be used for mating and if there is no mating then the cow cannot get pregnant, hence cannot give birth to more calves, and so cannot give milk. So for the sake of milk, at least some bulls are not castrated. They are allowed to roam free in the village streets and farms. These untamed masculine creatures are even worshipped as Shiva’s bull, Nandi, whose proud genitals are in display in every Shiva temple, which contain the seed that eventually leads to the production of milk. Nandi embodies Shiva’s virility as well as his independent and untamable nature. 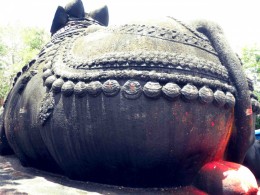 In modern sanitised temples, you will find images of Nandi without testicles in display as it embarrasses the modern urban devotee, who often does not know the difference between a bull, bullock, even cow. This is why cow protection has also become bull and bullock and barren cow protection. Gender nuance is completely lost. While protection of milk-giving cow has a strong economic basis, the protection of bull and bullock and barren cows is purely political – a belligerent stand that is beyond reason and so best left alone, as angry bulls often are.

Every time people speak of how vegetarianism is linked to non-violence and kindness, I think of the millions of bulls who over India’s history have been castrated to plough fields and pull carts. Is that cruelty or not cruelty? Is that violence or not violence? Who carries the karmic burden of the violence? The farmer or the consumer?

Civilisation is built on violence. We can argue which form of violence is acceptable and which form of violence is valid. But humans can never ever escape violence. Violently, we destroy forests and change the course of rivers, and bore into mountains to create human settlements and farms. In the process, vast ecosystems are destroyed killing millions of birds and beasts and fishes and insects. Since we do not witness these killings, we assume it does not happen.

The act of eating is violent because embedded in cultivated food (not wild foraged food) is the killing and castration of some animal or the other. Jain sages realised this and introduced fasting as a technique to reduce the karmic burden. They insisted on eating only fruit that fell from trees naturally, not fruit that was plucked. Even this, they realised meant depriving some other animal of food. Only one who could truly give up hunger could overcome the violence associated with the consumption of food. Such an evolved being was bhagavat, worthy of worship. Every other form of fasting is to remind us how difficult it is to escape the karmic burden of samsara or civilisation.

Our understanding of violence today is very poor. We actually believe that we can have a culture without it. This poor understanding of human culture is the result of increasingly outsourcing violence to farmers, and soldiers, and butchers, and to machines and robots, and to terrorists and goons.

Without violence, farms cannot be established. Without violence, produce cannot be protected from pests. From violence comes food on our table. If you seek food, if you seek to feed others, you are involved in some form of violence. This violence is very visible in the consumption of non-vegetarian food. This violence is invisible, and outsourced, if you are consuming vegetarian food. Since everyone consumes vegetables, and grains, and cereals, and pulses, everyone is responsible for creating a demand that involves farmers chopping the testicles of baby male calves. No escaping that. We can argue endlessly how much violence is acceptable. That is like arguing how much wealth is acceptable, where the rich will never agree with the poor. We can also argue that castration of a bull is not actually violence, or at least better than death. I wonder how many bullocks would agree to that.