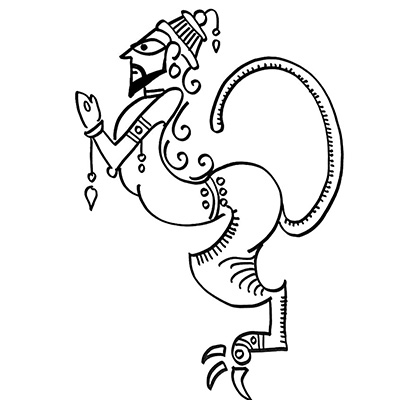 The Greeks believed in a world that moves from chaos to order, hence they yearned for culture. Forces that opposed culture were depicted as creatures that were half human and half beasts, the monsters, who had to be defeated by Greek heroes. One such creature was the sphinx, a lioness with a human head, who asks puzzles to those trying to enter or leave the city of Thebes, and killing anyone who fails to answer, in effect everyone. The hero Oedipus answers her questions, and gets her to leave, thus saving the city of Thebes from destruction.

The more famous sphinx is of course the Egyptian sphinx who guards the Great pyramids. There is no Sphinx in Indian mythology, except in South Indian temple traditions. Here, they appear as purusha-mriga, or the human-beast. Images of men and women with feet of a lion or tiger or sometimes deer, are found on the walls of the many temples of Shiva and Vishnu in Tamil Nadu and Andhra Pradesh. The purusha-mriga serves as vahanas (mount) that carry the utsav (festival) murti (images) of the gods and goddesses in grand processions.

A story of the purusha-mriga comes from the local Tamil version of the Mahabharata. Yudhishtira, the Pandava, was conducting a yagna. For it to succeed, he needed a purusha-mriga to be present. The mighty Bhima was sent to fetch such a creature. Bhima found him in the middle of the forest. “I will come if you can outrun me,” said the creature, “You run first but if I catch you before you reach the city of Hastinapur, then you will be my slave. If I don’t then I will do whatever you tell me to do.”

Bhima took up the challenge and began to run. The purusha-mriga followed. Bhima realised that the creature was very fast, so he had to use all his might to run faster. At the border, just when he put one leg out of the forest and into the city of Hastinapur, the purusha-mriga caught the other leg and declared victory. “You are my slave,” he said. Bhima disagreed. As king, Yudhishtira was asked to judge.

Yudhishtira said, “I will cut Bhima into two. You can have the side that you have caught and the other side I will take as mine.” “Are you willing to kill your brother rather than let him be my slave?” “Your half is a slave. My half is not. I am giving you half a slave.” Purusha-mriga was not sure if Yudhishtira was being fair, or clever, or stupid. He laughed and said, “You have made me happy, so I will let your brother free and attend your yagna.” So the yagna was successful and the purusha-mriga returned to the forest with many gifts.

In another story linked to Shiva, the purusha-mriga has a name: Vyaghrapada, or the one with tiger feet. Some may argue that Vyaghrapada is not actually a purusha-mriga as he was born human who asked for tiger’s feet. He was determined to offer Shiva flowers untouched by honeybees. So, he travelled through the forest and climbed mountains in search of these pure flowers, suffering greatly when sharp stones and thorns tore into the soles of his feet. Shiva offered him a boon and he asked for tiger’s feet to make it easier for him to travel through the forests and climb mountains with ease. Pleased, Shiva granted this wish and declared his image would be part of his temple iconography. Thus, we have the Indian Sphinx on South Indian temple walls.

This article is also listed under Mahabharata, Shiva