The Imposter In My Bed 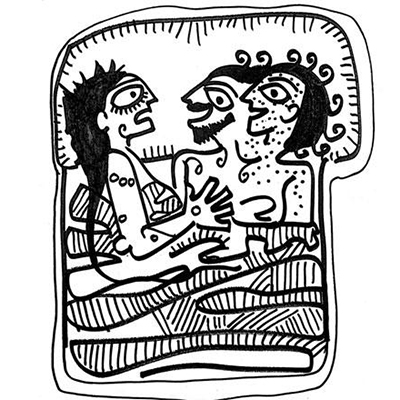 A common theme in mythology around the world is where a man enters his bed and makes love to a woman who he thinks is his wife. However, it turns out to be another woman who tricks him by taking the form of his wife. Likewise, there are stories of women who find themselves in bed with men who look like their husbands. In reality though, they are some magical creatures—either a god or a demon.

In Hindu mythology, we hear how the sun god, Surya, discovers that the woman in his bed is not his wife, Saranya, but her shadow, Chhaya. Saranya left him because she could not bear his bright glare. We hear the story of how Krishna’s son, Sambha, pretends to be Krishna and tricks his father’s junior wives. He is punished for this crime with a skin disease, so that the women can differentiate father from son. In some versions of the story, Ahilya is tricked by Indra, who takes the form of her husband, Gautam. We also hear of Agni who is so aroused by the wives of the Seven Sages that to prevent him from doing the undesirable, his wife, Svaha, takes the form of those women and alleviates his desire. From this misplaced desire is born the warlord, Skanda.

In British mythology, we hear of Uther Pendragon who falls in love with a married woman. He forces Merlin to change him into the form of her husband to have sex with her. This is how Arthur is conceived in an illicit manner. In Biblical mythology, we hear of Tamar. A widow, she is frustrated that her new husband cannot make her pregnant. So, she disguises herself as a courtesan and has sex with her own father-in-law, Judah, to get pregnant. Thus, she gives birth to twins, Perez and Zerah.

In Greek mythology, we hear of Zeus who disguises himself as the goddess, Artemis, and seduces one of her nymphs, Callisto. Callisto believes it to be Artemis and engages in a lesbian union and thus, gets pregnant. Artemis is furious and turns Callisto into a bear, hunted down by her own son. A related tale is that of Eros and Pysche. She uses a lamp to uncover the identity of her mysterious husband. She discovers her husband to be none other than Cupid. She loses him as she has discovered his true identity and to recover him, she has to go through many painful trials.

All these stories are meant to create anxiety. This was the time when there was no electricity or light and at night. People did not know who they went to bed with, in the darkness. There was always an anxiety that in the light, they would discover that the man or woman in their bed, was not who they though it was.

It also reveals the anxiety of men who are afraid that their wives are made pregnant by other men. In other words, being cuckolded. It is also the anxiety of women that the man entering their bedroom is not the man they married. They would be accused of infidelity. These are stories that are often seen in nomadic, trading and warrior communities. Here, the husband and wife often lived separately for a very long time. And so, the fear was
not farfetched.