The hermit’s smile: How celibacy, non-violence and purity work to establish patriarchy in India 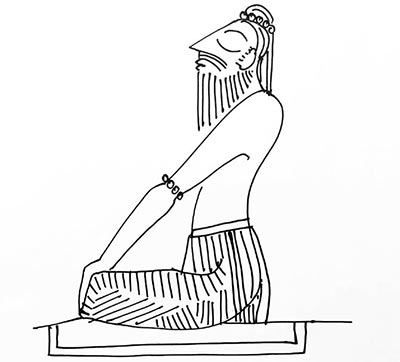 The popular model of a patriarch is derived from Greek and Abrahamic mythologies. Like Zeus, king of Greek gods, the patriarch is a serial rapist. Like Jehovah, God of Abraham, he demands absolute submission.

Many feminists, Western and Indian, impose this Western model to explain patriarchy in India, especially within Hinduism, and call it Brahminism. They tend to assume that monastic faiths, such as Buddhism and Jainism, and monastic orders of Hinduism, are non-patriarchal, even feminist, as they propagate pacifism and non-violence.

Yet, it is in monastic orders — Buddhist, Jain, and Hindu — that we can trace the origins of institutionalised misogyny, queerphobia, hierarchy, discrimination and untouchability, which are the hallmarks of patriarchy in Indian society.
The alternative tradition

Monasticism (shramana parampara) in India has a long history. It originated as an alternative to the mainstream householder materialistic traditions (yajamana parampara). They were two parallel streams, occasionally intermingling with each other to satisfy mutual needs.

With the rise of Buddhism, monks started actively engaging with society, encouraging people to embrace the Buddhist way, or dhamma. These were the earliest missionaries in the world.

Traditionally, the hermit was on his own trip, with no stake in householder politics and economics. But this changed in Victorian times, when the luxury-loving householder was seen as effeminate by the British, forcing freedom fighters to embrace the hermit’s way to prove their masculinity.

Today, the celibate man with ochre or white robes is viewed by the media as a “religious leader”, even a “messenger of God”, higher in station to the householder. This is a hierarchy that had never existed.

The hermits of India gave rise to three powerful ideas: celibacy, non-violence, and purity. Originally these were informed practices that would help the Buddhist monk attain nirvana, the Jain monk kaivalya, and the Hindu monk moksha.

Gradually, they were seen as occult practices that gave celibate men magical power, or siddha, as indicated in Tantrik scriptures, that enabled them to walk on water, fly, give child to the childless, wealth to the poor, and health to the sick.

Today, these practices have metamorphosed into tools of social justice. Yet, all the while, they have contributed to the worst practices of Indian society: misogyny, queerphobia, hierarchy, discrimination and untouchability.

Let us begin by understanding celibacy. It means renouncing sex, and is an integral part of continence, the renouncing of all forms of pleasure. While it should apply to men and women equally, in literature around the world, it is the woman alone who is traditionally visualised as temptation.

So, in Puranic lore, the water-nymph or apsara threatens the practice of the fire-ascetic, or tapasvin. Tales of young men trying to enchant female hermits and chaste wives are rare.

In Buddhist lore, Siddhartha leaves his wife and overpowers the daughters of Mara to attain Buddhahood. He resists the entry of women into the monastery, until he sees his stepmother weep following the death of his father.

In Jain lore, there are debates if the Tirthankara Malli, whose symbol is a pot, is a woman or a man, for the idea of a being with a female body attaining the highest state of wisdom and liberation is unthinkable to many.

Male hermits walk around naked during the Kumbh Mela, but female hermits dare not, as they must tempt no one. At the heart of the practice of celibacy, not its theory, is misogyny.

The female body is seen firmly linked to nature, hence birth, and death, owing to the involuntary menstrual cycle. It is the female body that arouses the male body, initiating the reproductive act.

It is the female body from which life emerges, and it is upon the female body that new life nurtures itself. And so, the quest for immortality invariably involved the rejection of the sexual act, more specifically, the woman.

To break free from her is to break free from nature, and merge with something transcendental, identified variously as liberation (moksha), God (param-atma), wisdom (kaivalya), immortality (amrita) and even oblivion (nirvana).

Today, Hindu temples that enshrine celibate gods — popularised by monastic orders — do not let women enter the shrine, just as ancient Buddhist monastery rules were wary of women, and had more rules to restrain the nun, than the monk.

Contrast this with the householder tradition, where Shiva has to marry Shakti and Vishnu has to constantly appease Lakshmi, ideas enshrined in temple rituals and festivities.

Discomfort with women invariably extends to discomfort with queer men and women, who are seen as oversexed, like women, tempting men to lose their way, which is why the pandaka [a gender classification in Buddhist scripture] was not ordained in Buddhist monasteries, and the celibate Bhisma refused to fight the transgender Shikhandi in the Hindu epic, the Mahabharata.
Non-violence

Now let us take a look at the doctrine of non-violence.

Today, non-violence is seen as a sign of a civilised society, and many academicians go to the extent of projecting Buddha with his pacifism as superior to Krishna who advocates war, making many Hindus rather defensive, even apologetic, and rightwing Hindus extremely angry.

This stems from a popular, and rather naÃ¯ve, understanding of non-violence, disconnecting it with food, wealth and economics.

Buddhist, Jain and Hindu traditions had a deep respect for sex and violence that were seen as key levers of nature. Sex enables reproduction. Violence provides food that enables nourishment. This made sex and violence key to survival, necessary tools for survival. So every plant is sexual and violent. And so is every human. But plants and animals are hardwired and know when to stop. Humans don’t. Hence conversations on ethics, governance, morality, law, justice and of course, dharma.

All human economic activities like farming, mining and husbandry that generate food and wealth are essentially violent. They involve destruction of plants and animals and entire ecosystems to generate resources for human society. There is no such thing as a non-violent economic activity. The householder cannot escape sex and violence.

The hermit who sought to break free from nature completely rejected sex and violence, hence the practice of brahmacharya (celibacy, continence) and ahimsa (non-violence). By giving up violence, he essentially gave up food. Hence, many monks would only eat fruits that fell from trees, and would not eat cultivated crops. These hermits of various denominations therefore did not interfere in the world of householders. They insulated themselves and followed their path in isolation. They did not look down on the householders for they knew the demands of family responsibility. Those hermits who saw themselves as superior were reminded of the truth of violence and non-violence, dharma and adharma, as in the story of the cocky hermit who is given a discourse on wisdom by a housewife and a butcher in the Mahabharata, in the episode known as Vyadha Gita, or discourse of the butcher.

So what does one do if one is a householder but seeks the same goals as a hermit? One can listen to the Bhagavad Gita of Krishna, and have to deal with its complex metaphysics, so complex that some academicians argue this is Brahminical gobbledygook to justify violence.

Or one followed, to the best of one’s ability, practices that restrained sexual and violent activity: hence the popularity of periods of fasting.

Households that embraced vegetarianism respected households that embraced non-vegetarianism. This was reflected in temple culture. For example, in the temple at Puri, Odisha: Jagannatha, the presiding deity, is strictly vegetarian, but he does not frown upon the local goddesses such Vimala, within the temple complex, and Varahi, outside, who love to eat the flesh of goats and fish.

Today the correlation between violence and food and wealth is poorly understood as we live in urban areas and are not familiar with the millions of bulls who were castrated to serve the bullock-cart economy of India for over 5,000 years, or the billions of rats who were killed to protect the annual harvest. We are embarrassed by stories, and even get violently angry with the suggestion that Buddha probably ate pork in his last meal, and get upset enough to unleash troll armies when faced with evidence in Sanskrit literature that Ram probably ate deer meat.

Today non-violence is closely linked with vegetarianism, popularised by the elite, who are blissfully ignorant of supply chain matters, hence the consequences of turning private customs of insulated affluent castes into public policies.

Vegetarianism was never a weapon of social justice or animal rights, which they have become today. Guess who suffers when vegetarianism is imposed on society forcefully?

Imagine a vegetarian trader telling a tribal what he is supposed to eat. Imagine a software engineer telling a butcher that his job is evil. A Buddhist arhat, a Jain muni, a Hindu sadhu would never do that. The tragedy today is that businessmen who abuse and exploit their workers are publicly respected by their spiritual gurus simply because these businessmen display zero tolerance towards non-vegetarians in their workplace.

Vegetarianism is now marketed as a kinder way of being and imposes itself through act of self-righteousness, moral outrage, passive aggression, and acts of non-violent violation, such as abuse on social media — the mocking of non-vegetarians as “flesh-eaters”, and the denial of housing to those who refuse to comply. Those who eat eggs, fish, mutton, pork and beef will have to accept separate kitchens, separate sections and separate utensils in hostels and company canteens.

A spiritual ladder has even been created amongst vegetarians, with those who do not eat root vegetables locating themselves at a higher level, as their food allegedly has a lesser degree of violence. Such discrimination is justified, even valorised, because non-violence is good.

Finally, we come to the most lethal monastic practice — purification. The discourse states that the soul is pure and blissful while the flesh is pollution and tempestuous. Hence, the yearning to break free from the flesh, from nature, and embrace the transcendental. This demands cleansing, the removal of toxins, and withdrawal from materialism, commercialism, pleasure and violence. No sex, no alcohol, no flesh, and no negative thoughts or deeds. Everyone associated with sex, alcohol, flesh, and money have been cleansed away. In these thoughts we find the seed of the inhuman practice of untouchability.

So cities are designed where in the centre live the purest people: the celibate hermit and the chaste priest, who are vegetarian, with ample access to water. In the periphery live the most unclean: the butchers, the leather-workers, the sewer-cleaners, the beef-eaters, the undertakers and the prostitute, who are dirty on account of their professions, and dirtier still as they are not allowed access to the village well. This was the realm of the so-called untouchables. In between the two extremes were the commercial trader and the land-owner, who outsourced violence to the periphery and funded the hermits and priests of the centre.

The doctrine of caste hierarchy may be codified in the Manusmriti, but caste hierarchy is not the same as untouchability. Untouchability comes from the belief in purity and the separation of the sacred and profane, the soul and the flesh, the pure and the impure, the holy and the unholy. The hermit and the priest may not have intended to exclude or discriminate, but their goals defined and legitimised derision towards all forms of so-called dirt: a woman’s menstrual blood, a non-vegetarian’s vessel, and a Dalit’s touch.

Nowadays, it is common to use science, or rather pseudo-science, based on non-measurable auras and vibrations, to explain practices such as celibacy, non-violence, purification, as well as misogyny, queerphobia, vegetarianism and untouchability. That does not take away from the fact that these are patriarchal practices. If anything, it justifies it. However, if we wish to trace the source of these practices, it is a good idea to look upon the beatific smile of the hermit, and contemplate the unintended consequences of all those activities that contribute to make him holy.