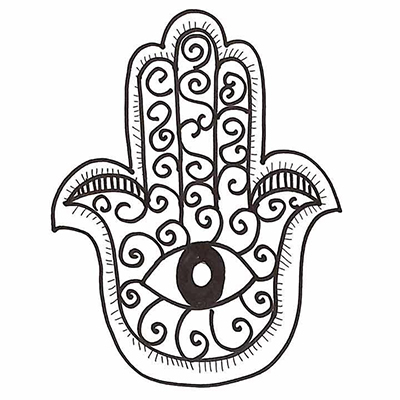 The hamsa is a common symbol used across the Middle East as a good luck sign. Originating in Ancient Egypt probably, it is used to bring in prosperity and to ward off evil. The word hamsa means five and represents the five fingers of the hand.

When the palm faces outwards, and upwards, in Hindu symbolism, it means abhaya, do not be afraid. When the palm faces outwards but downwards, it means varada, the symbol of donation or charity. Around the world, people comfort each other by raising the palm upwards. They provide food by turning the palm downwards. So, around the world, an upward pointing palm represents security and a downward pointing palm represents abundance. The hamsa represents a combination of the upward and downward pointing palms. This is why it lacks the asymmetry of a palm, but is very symmetrical, like two palms placed over each other. Thumbs appear on both sides. It is hung with the fingers upwards to protect a house. It is hung downwards to bring abundance into a house.

The hamsa, in the Jewish tradition, is called the hand of Miriam. Miriam was the sister of Moses. It is said that wherever she went, there was a cloud above her head. This cloud gave shelter to the people from the blistering heat, as they travelled through the wilderness in search of the Promised Land. Wherever she travelled, water flowed beneath her feet, and quenched people’s thirst. In her house, there was always a warm loaf of bread to feed the hungry. So, she represented both nourishment and security, provided by a home. These gifts of cloud, water and bread were associated not just with Miriam, the sister of Moses, but also with Rebecca and Sarah. Rebecca was the wife of Isaac, the biblical patriarch, and Sarah was her mother-in-law, the wife of the first biblical patriarch, Abraham.

In the Islamic tradition, it becomes the hand of Fatima. Fatima was the daughter of the Prophet Muhammad. The five fingers of the hand represent the great five leaders of the Islamic faith. They were Muhammad, his daughter, Fatima, his son-in-law, Ali and his grandchildren, Hassan and Hussein. This is part of the Shia tradition. This valorisation of the Prophet’s family is not accepted in Sunni traditions.

Middle Eastern traditions, whether Judaism, Christianity, or Islam, are highly patriarchal. Therein, God is male, most of the prophets are male, and the issues dealt with are masculine like law. Yet, the female form slips in through the symbol of the hamsa and is now part of modern jewellery. An eye is often placed in the hamsa to ward off evil and give protection to people. It is the eye that pays attention to your problems and resolves them. This is very similar to the concept of darshan in Hinduism. Perhaps, the hamsa is a pagan symbol and appeals to the human need to address the primal fears of hunger and fear.