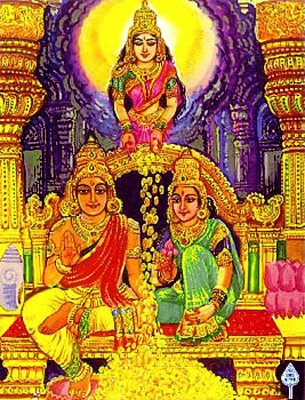 Published as ‘By Hook or By Crook’ in Corporate Dossier, Economic Time on 23 May 2008.

According to Brahmavaivarta Puran, Kuber, the king of Yakshas, had a gardener called Hema, whose duty it was to gather fresh fragrant flowers every morning with which Kuber performed his daily worship of Shiva. One morning, smitten by desire for his beautiful wife, Hema refused to leave his bed and go to the garden. As a result Kuber did not get the flowers for his worship. Enraged, Kuber cursed Hema that he would be struck with an incurable skin disease and he would be separated from his wife forever. The curse took effect and Kuber’s gardener found himself alone and diseased in a faraway land. For years he suffered the curse, feeling there was no way out until one day, he told his story to a sage. Feeling sorry for Hema, the sage advised him to perform a vrat, an observance that involved fasting and praying all day on a particularly auspicious day. “If you observe this vrat with pure devotion, you will be liberated from this curse. Your health will be restored and you will be reunited with your wife.”

Religious books are full of vrats, ways by which one can work around any distressing and apparently insurmountable fate. The same thought exists behind the notion of upaay that is popular amongst astrologers. Astrology is supposed to reveal through the position of stars and planets the fate of man. If the revealed fate is not favourable, then the astrologer immediately offers a work around — a gemstone, a mantra, a pilgrimage, a prayer, a ritual by which the negative effects of a planet can be overcome.

For centuries, Indians have been exposed to vrats and upaays. Hence, at a deep cultural core, most Indians believe there is nothing rigid about life. Everything is manageable, solvable, everything has a work around.

This powerful cultural construct has its most popular manifestation in the North Indian word jugaad. It is the ability to get things done when the law and the rule do not favor us. You want to fly down to Delhi today, but all tickets are booked — what do you do?  Do a jugaad and get your tickets despite all obstacles. You have been shifted to a new city and you want admission for your daughter in the best school in the neighborhood, and admission time is over, all you have to do is get the man who can get jugaad  done and find a way out. A jugaadu is a highly networked and resourceful person who can weave his way through any system and get things done when the straight and narrow path is blocked. He is a critical component of one’s team if one wants to succeed in India.

How does this Indian culture of quick-fixes fit into a very fatalistic worldview? In the typical Indian way of accommodating everything, we surrender to fate for the big things in life but for the small things in life we subscribe to jugaad and vrat and upaay, we believing in bending fate, but we do not believe we can break it. That is one reason why Indians are such short-term thinkers, finding it difficult to plan for the distant future (airports for 2020) while finding it easy to find jugaad for the immediate problems (land domestic flights in international airports to handle the air traffic crisis).

For many the existence of jugaad is a testimony that systems in India are inefficient and corrupt, that people are not upright, that rules are not rigid or universal. It indicates that Indians have no qualms about bypassing the system to get their way. It demonstrates that systems established in India may claim to block elephants but there are always enough narrow gaps to let a rat through. For people who are linear thinkers, this non-linear  behavior can be rather disconcerting. It makes a person untrustworthy.

For others jugaad is proof of Indian ingenuity and creativeness — a demonstration that Indians are not willing to accept fate and are willing to scurry a solution out of any problem. Nothing is insurmountable. Everything can be overcome. If one has the will, there is always a jugaadu way.

So this leads us to the question, does the system construct jugaad or does jugaad construct the system? Are we creative thinkers and therefore refuse to create linear logical systems? Or is it that we find linear systems tedious, demanding too much discipline and uprightness, hence turn to jugaad? The answer perhaps lies in the emotional nature of Indians that is responsible for both the inefficiency of the system as well as for the effective workarounds.

If you travel across India, you cannot rely on a postal address to find a person’s house in a city. Postal addresses are logical — name of the city, the area, the road, the colony, the building, the flat. But Indian cities are not logical. You have to step down from your car and ask the local paan-wala or kirana-wala for directions. This is also jugaad, albeit a minor form, that allows you to overcome a situation that is not favored by logic. If you are in USA, this may not be possible or even needed. Everything is so well organized with roadmaps and street signs there is little need to ask anyone. Today, there are street signs and road maps in India too. But people still prefer asking people around them for directions, indicating the Indian comfort with people than with processes, with private emotions rather than with impersonal logic.

Indians do not split professional and personal behaviour very easily; professional friends over time become personal friends making it possible to ask for favors and do jugaad. There seems nothing wrong with taking advantage of his role and position for a friend. Most of jugaad is not just done through bribing or such financial transactions; it is done through relationships, networks, favors and emotional blackmail. It cannot be reduced to a process.

The Indian comfort with jugaad is the reason why we tolerate and even contribute to inefficiency. We are not burdened with doing a job as per plan, exasperating people unfamiliar with the Indian way. Deep down, we don’t believe systems work hence don’t invest time and resources to building systems. It is perhaps the reason why the service sector is discovering that Indians are not very demanding of customer service. We don’t expect things to work through processes — hence we find innovative personal ways to get things done. Rather than call up the telephone agency’s complaint department which will give standard promises of 7-day solutions, we have greater trust in giving baakshish to the local lineman who will solve the problem in 3 days. We have become such compulsive out-of-the-box thinkers that, as we connect with the world at large, we need to train ourselves to be more in-the-box, become more aligned to processes and respect the rigidity of the system.