The gradation of abuse, and love 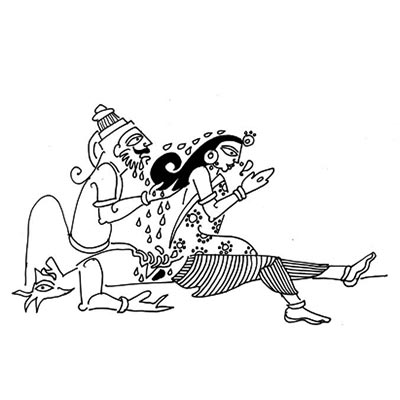 In the Mahabharata, Draupadi is determined to wash her hair with the blood of Dushasana, for though brother-in-law he has treated her with savage disrespect by dragging her by her hair to the gambling hall. But, during the exile, when Jayadratha treats her with disrespect, and tries to abduct her, she spares his life so as not to widow her sister-in-law, Dusshala. But she does not spare the rakshasa Kirmira who tries to molest her in the forest, nor Kichaka, brother-in-law of the king of Matsya, who attacks her while she hides in the palace serving as maid to the queen; she is glad when Bhima kills both. All abusers are not treated equally.

Arjuna has many sons, but his love for them is not equal. He is deeply attached to his son by Subhadra named Abhimanyu. He needs to be reminded that he has a son by Uloopi called Aravan, who in the Mahabharata of Tamil Nadu is offered as sacrifice to ensure Pandava victory. After the war, he does not recognise his son by Chitrangada, princess of Manipur, named Babruvahana. And his son by Draupadi named Shrutakarma is but a formal detail in the epic, noted only because he is killed in the night following Pandava victory.

And so the same crime committed by one of ours is never as bad as one committed by one of theirs. When a Pakistani soldier kills, or rapes, it is worse than when an Indian soldier kills, or rapes. Terrorists are good if their terrorism serves us, bad if it is turned against us. Corruption and dynastic politics is bad only when seen in Congress, not in other parties, or in film industry or India’s family-owned businesses. A criminal is less a criminal if he is a Bollywood superstar who entertained us all his life, more so if he is a poor, uneducated, ugly nobody. Our judgment is a function of who we include and how far we include them. So ISIS throws gay men from buildings to their death; our Supreme Court simply considers rights of miniscule sexual minorities not significant enough to warrant judicial intervention. We see the latter as superior to the former: our people don’t kill; we simply invisibilise.

Our teleserials dramatise the rage of Draupadi against Kauravas with voyeuristic pleasure. But no one bothers to analyse it deeply: why are Kichaka and Kirmira and Dushasana treated differently from Jayadratha? Do caste, class and relationships shape our views? Why is one abuse less abusive than the other? Why does Arjuna weep for one son more than the other? Why does this great hero of ours not care for all sons in the same way? In the human mind, equality has no place. We love to grade, we love to judge, rationalise and justify for all that we consider as ‘mine’ – makes me feel good about myself and I shall do everything in my power to defend the mine, their crime notwithstanding.