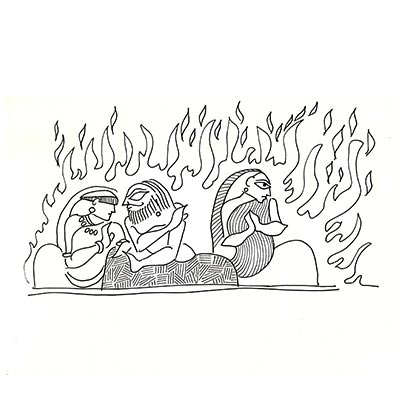 Euthanasia means a good death and is a term used for an old or sick person voluntarily choosing death to relieve himself/herself of pain and suffering either by refusing treatment, or by asking the assistance of a doctor to facilitate his/her death either actively (administering a poison, for example) or passively (not administering a treatment, for example). It’s a highly controversial topic.

The roots of this controversy can be traced to 19th century debates, which in turn can be traced to the Judeo-Christian-Islamic attitude towards suicide. In biblical worldview suicide is self-murder, hence against the Commandments of God, hence a sin. In Judaism, those who committed suicide were buried in a separate cemetery, and denied proper burial rites. In Islam, the Prophet Muhammad expressly forbade suicide and refused to bless the body of one who had done so. Since the British established the modern Indian legal system in India, their Christian belief manifested itself when those who attempt suicide were treated as criminals, rather than with compassion. It is this same root in Christian belief that made homosexuality illegal in our country.

Until the rise of Christianity, most cultures did not think not harbour too much negative feeling about suicide or assisted suicide. For example, the Greeks were comfortable with the idea of consuming hemlock (a poison) to kill oneself. Socrates and Plato spoke of it matter-of-factly. The Romans were known to stab themselves rather than face dishonour. We hear of the famous suicides of Anthony (by self-stabbing) and Cleopatra (who put her hand in a basket containing a poisonous snake). The Japanese turned the practice of suicide into an elaborate ritual called hara-kiri or seppuku, which was part of the bushido code of samurai warriors.

In Hinduism, there is no concept of commandments. And there is belief in rebirth. And so attitudes towards dying are very different. This is not the only life; this is but one of many lives. The human being is advised to divide his/her life into four parts: first as a student (brahmachari), then as a householder (grihasthi), then as a retired person (vanaprasthi) and finally as a hermit (sanyasi). In the first phase, he eats as much as he wants; in the second phase he eats only as much as he needs as he bears worldly responsibilities; in the third phase he eats only half of what he ate as a householder and focuses on withdrawing form worldly responsibilities; and finally he shuns food, focusing his mind on liberation from the cycle of birth and death. Thus, there is an implicit encouragement of voluntary death.

In the Mahabharata, the old parents of the Kauravas and the mother of the Pandavas go to the forest where they are engulfed by a forest fire. The Pandavas themselves in their old age go to the Himalayas where they fall to their death. Thus, they were exposing themsleves to situations where the probability of death was high. They did not kill themselves but walked into situations were the probability of death was high, indicating their detachment from life.

In the Ramayana, after Sita enters the earth, Ram chooses to enter the river Sarayu and attains Samadhi. Saints like Sant Dyaneshwara, who translated the Gita for the first time from Sanskrit to a regional language in the 13th century, also chose the path of Samadhi. Rationalists view Samadhi as a euphemism for voluntary suicide, but devotees disagree, for suicide — because of the law — has a negative connotation to it, and suggests helplessness and weakness, when in fact those who practice Samadhi are seen as wise and enlightened beings who use yogic practices to voluntarily leave their mortal bodies.

Voluntary suicide is explicitly embraced in Jainism where both the monk (shramana) and the commoner (shravaka) are encouraged to embrace death by gradual starvation, after fulfilling all worldly duties, and by cleansing the mind of all attachments. This practice is called santhara. Chandragupta Maurya, grandfather of Ashoka the Great, embraced death in this way.

That being said, the concept of voluntary suicides can easily be misused, and India has seen this spectacularly in the practice of Sati. What began allegedly as an attempt of women to protect themselves from abuse during wartimes and for women to express their love for the husbands, ended up as a tool to get rid of ‘unwanted’ widows. The only other option for them was exile to the widow-houses of Mathura and Kashi. By glorifying Sati, women were pressurised to kill themselves, enabling greedy relatives to lay claim to the properties left behind by their dead husbands. It is possible that those not wanting to care for old and sick people will misuse a law favouring euthanasia. But by disallowing euthanasia, the law can also end up amplifying the pain and suffering of many, in the name of imagined righteousness.