The Fruit of Foul Language 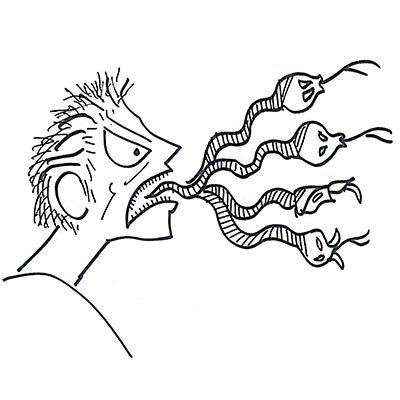 People are often alarmed when they encounter it. Yet, there are rituals in which you abuse a deity. It is called ninda-stuti. You use the foulest of words, the choicest of insults. Rationally, the exercise is meant to serve as a catharsis. Get the negative energy out of your system. God can take it. Psychologically, it’s a safety valve.

Foul language has been on my mind for a few days as the newspapers and social media is abuzz about (allegedly) well educated, well groomed, mature, male adults from ‘good’ families (allegedly) abusing (allegedly) well educated, well groomed, mature, female adults from ‘good’ families in public spaces. I say allegedly as the event which took place in public has no witnesses and no camera recordings. Such selective loss of data and memory happens whenever celebrities are involved. So no one is particularly alarmed. I also say allegedly as really am assuming quality of education, grooming and maturity and the very notion of ‘good’ families, a term much favoured by Indians, when a man abuses a woman verbally (Was physical pushing and shoving also involved? Who knows? Certainly not the people who were there at that time!).

But what exactly is a foul language. To understand this, we have appreciate the difference between nature (prakriti) and culture (sanskriti). In nature, anything goes, and there are no judgements, and so no such thing as ‘foul’ language. In culture, however, there are judgements, and some things are acceptable and some things are not. Many things are foul and rejected. Sanskriti domesticates us, and the language we use. Domestication is about control. We supress our emotions and our real feelings, because we want to be good. More importantly because we want to look good because appearances matter.

But then, the boundary collapses, and nature overwhelms culture. This usually happens when we are angry. All pretensions of civilization collapse. The wild beast surges forth, baring its fangs and thrusting its claws. The reins break. The dam bursts. All that is bottled within, breaks out. All that was forgiven before is unleashed. We reveal what we have always seen but never shared out of courtesy. We say things we know will hurt the other. We specifically release missiles that hurt the other the most.

The battles are worse between former friends. For in friendship we reveal our vulnerabilities. These become the ‘Achilles heel’ that we target during a subsequent fight. We take advantage of all that the former friend revealed in a moment of trust. That we feel powerful as we strike the other down with a volley of abuses. We feel triumphant as we rip them to shreds emotionally, and sometimes physically. Emotional abuse is difficult to prove in the court of law, but physical abuse is not. This fear of our vulnerabilities being used against us when ‘we are no longer friends’ is what stops people from opening up to potential friends. It is what makes us hold back in relationships. We regress into our caves of comfort and control, for we are unable to handle the harsh otherwise hidden truths of nature.