The flower that killed Indumati 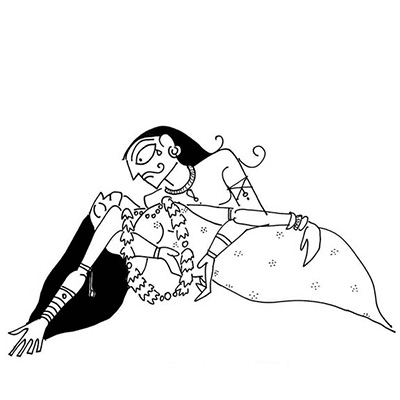 Kalidasa’s famous work, Raghuvamsa, composed around 500 CE, tells the story of Ram’s ancestors, including Dashratha’s parents, Aja and Indumati. Indumati selects Aja in her swayamvara ceremony, much to the irritation of other assembled princes. And the two live a happy life, full of heady romance. But then tragedy falls. Shortly after the birth of Dasharatha, Indumati dies. It so happens that Narada is travelling in the celestial realms above when a flower from his garland falls from the sky towards earth and falls on Indumati who is walking in the royal garden. Startled, she dies. Aja is inconsolable in his grief and dies shortly thereafter.

This tale, of sudden tragedy and the death of a man who cannot bear separation from his wife, is rare in Indian mythology. Typically, it is the woman who cannot bear separation from her husband, and withers as she waits for him to return either from a faraway land or from a battlefield. Overtime, stories of men grieving for their absent wives have been ignored. We forget the tale of Dushyanta pining for Shakuntala, or Ram weeping on learning of Sita’s abduction, or Krishna running in the forests crying out, ‘Radhe, Radhe,’ as he searches for her. Kalidasa loves this motif. We find it repeated in his famous work, Megha-dutam, where a Yaksha tells the cloud-messenger to convey to his beloved, how much he loves her.

The story of Aja and Indumati is designed to show the principle of kama in our lives. In Raghuvamsa, Kalidasa also shows the principle of dharma and artha through the characters of Dilip and Raghu, grandfather and father of Aja. Dilip saves a cow from a lion, offering his own life to the lion instead, indicating the principle of helping the weak and helpless, which is dharma. Raghu embodies the principle of artha or economic welfare, when he distributes his wealth freely.

We are subtly being told that Ram, the son of Dashratha, whose tale is told in Ramayana, embodies the characters of Dilip, Raghu and Aja. He is as noble as Dilip, as charitable as Raghu and as loving as Aja. The flower that kills Indumati comes from the heaven and is symbol of fate that can strike at any time and end abruptly the happiest of dreams. Ram too will have to face a similar calamity, when the arrival of Surpanakha sets in motion a whole series of events over which he has no control. Surpanakha is mutilated in a fit of impatience, her brother abducts Sita, a war is waged to rescue Sita but eventually Ram has to let her go as street gossip about her stained reputation makes her unworthy of being a queen of the Raghu clan.

Just as Aja cannot live without Indumati, Ram cannot live without Sita. He refuses to remarry and, when she goes under the earth, he walks into the river Sarayu and never rises again. This is called jala-samadhi (giving up one’s body voluntarily in water) by the devout. In a patriarchal society, where women were once expected to burn themselves on their husband’s funeral pyre as Sati, no one is allowed to say that a husband killed himself because he could not bear life on earth without his wife. So, it is even today.