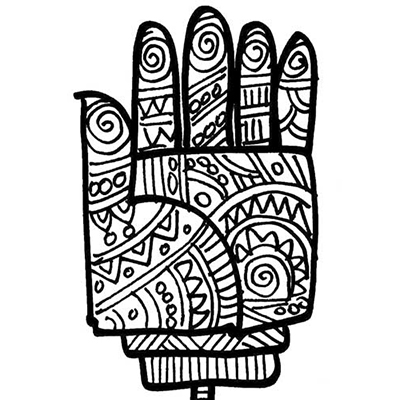 One of the unique features of Islam in South Asia is the veneration of five holy men, or saints (auliya), known collectively as pancha-pir. They are often represented by the palm of the hand, mounted on a mound. We find shrines of pancha-pir in Punjab, Rajasthan, Uttar Pradesh and Bengal. They are sometimes identified as the five pure ones of Shia Islam: the Prophet Muhammad, his daughter, his son-in-law, and his two grandsons. Other identify them as five Sufi saints, often the teacher with his five students. Still others say they refer to the Prophet Muhammad and the first four Caliphs. This veneration of five holy men in dargahs is however frowned upon by Islamic purists, who believe that veneration should be reserved for God, and none other.

In folklore, the pancha-pir often appear to bless heroes on quest, or to establish the greatness of a local king. In many Hindu temples, especially in Rajasthan, where folk-heroes are deified, as in the case of Ramdev baba, one finds pancha-pir endorsing their greatness, thus indicating syncretism of Hindu and Muslim ideas at the grass-root level. In Bengal, they are popular amongst sailors, who seek their protection before setting out into the sea, and thank them on their return.

Stories of pancha-pir often reveal much similarity with village gods and goddesses of India, who are known to help when appeased and harm when angry. So we learn how they gave their horse to a queen so that she could use the horse’s blood to cure a husband. The queen later refuses to return the horse and so the pancha-pir destroy her kingdom. Sometimes the pancha-pir are paired with their five wives who disobey them and so are reduced to five piles of ash.

How did this idea emerge? It is possible that these five pirs were earlier the five tathagathas of Buddhism, found in Tantrik Buddhism, that flourished in eastern India during the Pala kingdom. There is the central Buddha, Vairochana, with four other Buddhas in the four directions, represented in four different colours, embodying four different principles, thus indicating universality. Such images are found in Buddhist shrines and Buddhist mandalas.

The idea of the five collective is found in Hinduism too: the Pandavas, for example. In Puri, Odisha, the five Pandavas take the form of five Shivas. There are images of Pancha-mukhi linga, where five faces, each in different mood, arise from a single pillar. There is also the concept of five chaste women: the pancha-kanya, which includes Sita, Draupadi, Ahalya, Mandodari and Kunti.

The most recurring concept in Indian mythology is that of a teacher with four students who take his knowledge in the four directions. One learns of Veda Vyasa and his four disciples, the Shaiva sage, Lakulesha, with his four disciples; the Jain saint, Vajraswami, who founded four orders (gaccha); the Sikh saint Sri Chand, the eldest son of Guru Nanak, who passed on the sacred fire (dhunni) of his order (akhara) of ascetics (udasin) to four disciples; the Vaishnava, Ramanuja also passed on his mantle to four disciples. This idea of the collective of five, best represented by the palm of the hand, clearly gave meaning and power to local faiths and also kept together various divisions that emerged in religious orders. Hence its enduring appeal.