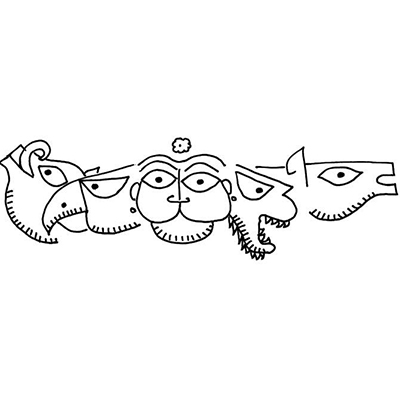 One of the popular images of Hanuman is one where he has five faces and five pairs of hands. It is known as the Panchmukhi, or five-faced, Hanuman. It reminds us of Krishna’s Vishwarupa described in the Bhagavad Gita, albeit a diminutive version. It transforms Hanuman from a dependable servant of Ram to a very independent deity worshipped in his own right.

Besides the monkey head, there is the head of a lion, an eagle, a wild boar, and a horse. The horse represents Hayagriva, the god of wisdom, the Varaha represents Vishnu’s boar form, the eagle represents the soaring Garuda and the lion represents the powerful Narasimha. In his five hands, Hanuman holds five weapons. Panchmukhi Hanuman is often kept in temples facing the south and is also called Dakshin Mukhi Hanuman, the south being the direction of death, associated with Yama and with ghosts, goblins, negative and malevolent forces. This form of Hanuman is used especially in the occult practices to protect oneself from negative forces.

This image became very popular about a thousand years ago, much after the Valmiki Ramayana was composed. It was also closely linked to the tantric period and the rise of yogic practices. The belief was that Hanuman being a celibate hermit had Siddhi, or special occult powers, that enabled him to change his size and shape at will. He could fly in the air, float on water, reduce his size – become tiny as a bee and as gigantic as a mountain – because of Siddhi.

This made him very popular among occult practitioners In the Middle Ages, a new retelling of Ramayana known as Adbhut Ramayana emerged. This Ramayana has a tantric flavour, in which Ram is side-lined – at one level by Sita and at another, by Hanuman. Sita takes the form of Mahakali to defeat Ravan’s elder brother, proving to Ram that she is quite capable of taking care of herself. It is she who is giving him the power to establish his royal prestige by defeating Ravan.

At the same time, there is a story of Ram being abducted by Mahiravan. Hanuman goes to the nether regions and, fighting various forms of demons, he ultimately defeats Mahiravan, his wife and son, Ahiravan. He rescues Ram, who is about to be sacrificed to the goddess Kali. Here, Hanuman is closely associated with Kali and in relation, the occult and tantric traditions. This form of Hanuman is often also called Paatali Hanuman (one who travelled to the netherworlds) and is very popular in rural India.

The images of Hanuman with his five arms, five heads trampling two demons Mahiravan and Ahiravan, with his upraised tail and an aggressive posture is a very strong tantric symbol. This is used independently by many people to protect themselves and give themselves strength in hard times.The image reminds us of possibilities. Hanuman is a vanara, a monkey in popular imagination. But when he meets Ram, when he serves Ram, he travels to the south and to the nether regions (Pataal) and discovers the divine potential within him as he solves problems. This potential enables him to the limitations of his monkey body. He discovers within himself the horse, the lion, the eagle and the wild boar. It reminds us to rise above the constraints of biology, through faith, patience and perseverance.