The end of the Buddha’s clan 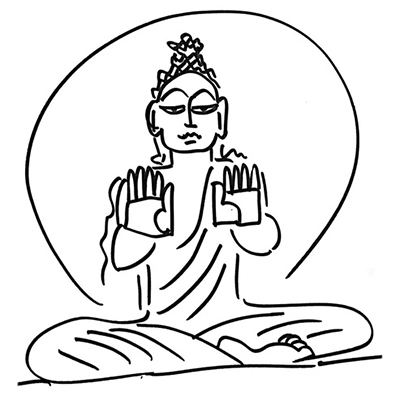 The Buddha and his followers used to always eat one meal in the house of a layman. King Pasenadi of Kosala asked the Buddha how a monk chose a house to eat at. The Buddha replied that it will be a house that one trusts. The king then asked what house does one trust. And the Buddha replied, family. To make himself trustworthy, Prasenadi felt he had to become a member of the Buddha’s family, and so he approached the Sakya clan and asked them for a bride. They were reluctant but he was persistent. So he was tricked into accepting a girl named, Vasabhakkhattiya, whose father, Mahanama, was Sakyan, but the mother was a slave girl.

The story goes that Mahanama ate from the same plate as his ‘low’ daughter but before he could swallow the food, a messenger called him out of the dining hall so he could secretly spit out the food. Pasendadi was thus fooled. The son born of this union was named Vidudabha.

Vidudabha was never allowed to visit his maternal grandparents. When he finally did, he learnt the truth of his ‘low’ origins, for he saw servants washing the seat he sat on with milk and water to ‘purify’ it. When he told his father this, King Prasenadi disowned him and his mother instead. The family was later reunited thanks to the Buddha’s intervention.

But Vidudabha took a vow to destroy the Sakya clan. And raised an army after his father’s death. Each time he reached Kapilavastu, he found the Buddha sitting outside the city under a tree that offered little shade. The Buddha explained that his family’s love kept him cool. Realising how much the Buddha loved his family Vibudabha turned around with his family.

This happened three times. But, the fourth time, the Buddha did not intervene. He said his family, in their last life, had poisoned a river and so had to pay for post misdeeds. Karma had ripened and he could do nothing about it. And so the Sakya slaughter took place. Everyone was killed except those who entered the battlefield and symbolically rejected violence by holding blades of grass or reeds between their teeth. Everyone was killed: man, woman, child. The Buddha did not stop the slaughter.
While returning home, Vidudabha and his soldiers slept on a dry riverbed. Ants came at night and carried those who were sinless to the riverbank. The rest, including Vidudabha, were drowned in a flash flood, and their bodies were swept away by the raging river into the sea.

This story from the Bhaddasala Jatakas is very similar to the story of the death of the Yadava clan decades after the war at Kurukshetra between Pandavas and Kauravas. It is the result of Gandhari’s cursing Krishna and the result of Krishna’s son, Samba’s prank that gets him and the clan cursed. A civil war takes place amongst the Yadavas. Here, too, blades of grass and reeds play a role – but they take lives, don’t save them. Here, too, the sea plays a role; it is the witness to the massacre, not a watery grave. Like the Buddha, Krishna does not intervene, and in some stories participates in the slaughter, submitting to the ripening of karma.