The Elusive Amrita and the Question Of Eternal Life 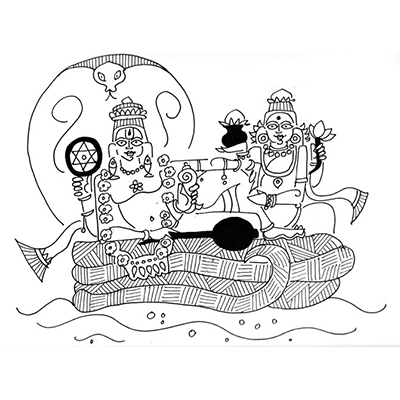 The earliest story of the grand churning of the ocean of milk, samudra-manthan, for the nectar of immortality, amrita, is found in the Mahabharata. But strangely there are more images of this mythological episode in Southeast Asian temples than in India. There is no artwork in India to match the grand Angkor Wat corridor in Cambodia that shows devas and asuras holding the serpent-king Vasuki with Vishnu overseeing the entire enterprise. At Bangkok’s Suvarnabhumi airport one finds Vasuki (or Adi Sesha) take the shape of a Chinese dragon. In India, at best, we find images of Vishnu as Kurma, the turtle, on walls of Vishnu temples, despite the widespread popularity of the story. This may have something to do with the ambiguous relationship that Indian philosophy has with the idea of immortality.

The Buddha was clear that nothing in this world is permanent. There is no concept of a permanent soul either. Jains insisted that every organism has a permanent soul ( jiva). Hindus went a step further and said besides a soul ( jiva-atma) in every organism, there is a cosmic soul ( param-atma) animating the whole world. But the idea of amrita is different from atma. Amrita is about the immortal and youthful body; atma is about the unseen, formless, tranquil spirit.

In the Puranas, when an asura asks Brahma for the boon of immortality, he is told that it is one boon that cannot be given. So the asura asks for a boon by which he seeks to outsmart death and make himself near-immortal. He fails, of course. There is always a loophole, something the demon forgets to ask protection from. Ravana is killed by a human; Mahisha by a woman; Taraka by a child. Everyone has a vulnerable spot.

We are told that only the devas are blessed with amrita; they never grow old, they never die. But their luxurious life in swarga is constantly threatened by relentless attacks by asuras. Eternal life does not seem to be accompanied by eternal joy. Is there a message here?

In a later version of the story of churning the ocean, we are told that Lakshmi disappears from swarga when Durvasa cursed the hedonistic Indra. To churn her out, this enterprise is planned. The asuras serve as the counterforce. These enemies of the devas agree only because they are offered a share of the fruits of labour. But when amrita appears, the asuras are tricked and denied their share. Devas become immortal, not the asuras. A story of injustice that is often quoted in anti-caste circles to illustrate Brahmanical trickery.

But that is only half the story. The asuras have Shukra as their guru and he has access to sanjivani vidya that resurrects dead asuras. Asuras may not be immortal; but they can regenerate themselves and trouble devas endlessly. The authors of these stories insist that devas cannot be all-powerful and eternally successful, even if they have amrita.

In the story of samudra-manthan, Vishnu takes the form of Mohini and offers to distribute amrita fairly between devas and asuras. Enchanted by her beauty, both parties agree. Since the enterprise was initiated by devas, she begins by serving devas first. But one asura named Svarbhanu doubts Mohini’s intention and sits among the devas as one of them. The sun and the moon identify him and Vishnu immediately cuts off Svarbhanu’s head.

The samudra-manthan is also equated with the turning of the year. When the devas are pulling, it is Uttarayana, when the days get longer and warmer. When the asuras are pulling, it is Dakshinayana, when days are getting shorter and colder. This is not a tug-of-war; this is manthan, a churn, where the devas and asuras have to collaborate, pull while the other pauses. Only collaboration generates amrita, seems to be the message.

Vishnu splits the world by placing devas above the sky and asuras below the earth in patala. Here, in the subterranean realm, sprouts every seed. From here springs water, metal, and gem. That is why Lakshmi is called Pulomi, the daughter of the asura-king Puloman. She emerges to become Vishnu’s wife, Sachi, during harvest time and returns to her father’s house during sowing season.

When Lakshmi finally appears from the ocean of milk, she chooses as her husband not Indra, the king of devas, but Vishnu. Indra, the supreme deity of the Veda, is a junior deity in Puranas. He constantly fights asuras and is insecure about his position. He lacks the confidence, contentment, and grace of Vishnu. But she always comes back to Vishnu, as only he always upholds dharma. Her repeated return turns Vaikuntha into the ocean of milk, a realm of abundance.

By placing Vishnu above Indra, the collaborator is celebrated over the competitor. By placing Vaikuntha above swarga, the scriptures are positioning the spiritual above the material. The spirit is eternal not the flesh, not the material world. The body decays and dies. The world rises only to fall.

Later Hindu mythology has ideas of chiranjeevi, the immortals, perhaps the result of contact with Chinese monks who spoke of the eight Taoist immortals of the Jade Heaven. But an analysis of the stories of Chiranjeevi reveals something distinctly Indian. They are a tool to make us realise how the quest for material permanence is futile, and only creates misery. Hanuman and Vibhishana have to watch how Ram eventually has to leave earth and return to Vaikuntha. Kripa and Ashwatthama have to witness how wars do not solve problems. Parashurama observes how kings do not change, despite threats of violence. Bali realises that generosity does not solve all human problem. Markandeya, saved by Shiva, has to witness how during pralaya everything in this world withdraws into Vishnu, awaiting a suitable time of for regeneration.

We build things for permanence. We believe in ‘happily ever after’. Every deva feels the defeat of asuras is permanent. Every asura feels that the vanquished devas will never return. But they are always proved wrong. Nature balances the nectar of immortality, amrita, with halalal, the poison consumed by Shiva, and sanjivani that the asuras have access too. Every asura thinks he can cheat death but is invariably outsmarted.

As Yudhishtira told the yaksha when asked about the greatest wonder, ‘Everyday people die but the rest live as if we are immortal.’’