The Doubtful Reality of Histories 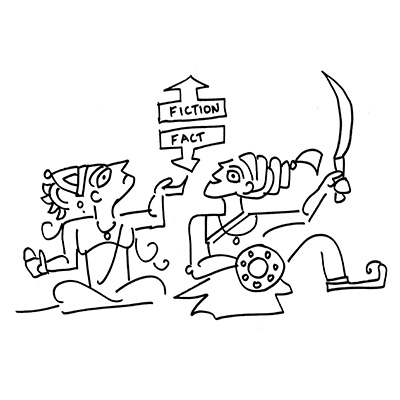 European scholars mocked India for never having a history. It was seen as a bad thing. Today we assume that having history is a good thing. But for centuries, India never valued history. It valued mythology. For the past hundred years, Indians have been defensive and apologetic about this value placed on mythology and have gone out of their way to prove we are historical too, so much so that universities only teach history, there is no mention of mythology. Yet, year after year, the politicians and the academicians clash over what is correct historical content. We want facts. We only value facts. Or do we?

Fact is that there is no mention of Jodha-bai in any biography of Akbar, the Great. So did he marry the Rajput princess, sister of Man Singh? Ask the average Indian and they will say yes, informed by Bollywood films and television serials, which finds great joy in the tale of the magnificent Muslim monarch being tamed by love for his demure Hindu wife. The imagery reinforces, in the mind of Indians, our tolerant spirit. This, of course, makes truth-seekers and history-lovers cringe. So do we need a truth that does not speak of Hindu-Muslim harmony or a fiction that celebrates it? What is good for society?

Of course, things get complicated when we also tell the story of Rana Pratap and make him not just hero, but also patriot. For then, Akbar becomes the invader and villain.

History is based on evidence. It does not care for faith. But human civilization is based on faith. The European explorers claimed rights over the Americas in the name of European monarchs who had been blessed by the ‘divine right of kings’ passed on by the Catholic Church. It was not claimed by democratic processes. Today’s American democracies, distancing themselves from all things religious, benefit from that old myth that enabled them to wipe out much of Native American nations. Today, most of South America speaks Spanish, except Brazil where people speak Portuguese. Why? The Pope drew a single line allowing the kings of Spain and Portugal to share the spoils to the West and East of the Line. By what right? Divine Right!

We may be embarrassed by it but we cannot ignore the role of myth in shaping history and present politics. Today, we may deny ‘God’ in the name of rationality but now we have ‘democracy’: it grants many the right to bomb religious states on grounds that they are not listening to the people. European Union excludes Vatican on that ground. Actions based on fact, or imagination? Reality or myth?

The Rishis of India saw history purely in functional terms. History, for the rishis, is how we use imagination to make sense of the world. So, the extermination of Jews by Hitler is described as Holocaust by most history textbooks, but the same term is not used for the extermination of many Africans and Indians by the artificial famines created by the economic policies of colonial powers in the 19th century. It is the mind that decides what is real and what is not, what is fact and what is not. Most of the world rejected this ‘fact’, until the 20th century saw the rise of psychology.