The Curious Case Of Two Valmikis 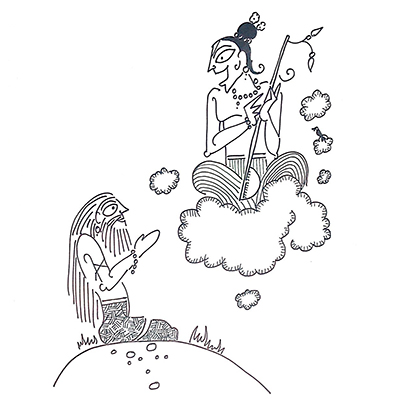 Rishi Valmiki is known as Adi Kavi, the first poet, who composed the first mahakavya, epic, the Ramayana, that chronicles the life of Rama, prince of Ayodhya. In the final chapter of the epic, Uttara Kanda, we learn how he teaches the story to Luv and Kush, the sons of Sita and Rama, who are born in the forest after Sita is sent away from Ayodhya by Rama to avoid a royal scandal — following public gossip casting aspersions on her character. Later, in the same chapter, Valmiki has a conversation with Rama, when he testifies to Sita’s purity. The Vedic Sanskrit used in the epic suggests it was composed over 2,000 years ago, describing events that took place 3,000 years ago, perhaps even earlier.

We don’t know much about the great poet-sage. However, about five hundred years ago, a new set of stories start to emerge, that speak of a man called Ratnakara who is forced by poverty to turn to robbery and is made to change his ways by sages, either the Sapta Rishis, seven celestial sages — or by Narada. He realises that the burden of his crime is his alone, and will not be shared by those who benefit from his crime.

To help him out, the sages tell him the eternal story of Rama, which was narrated by Shiva to Shakti, and overheard by the crow Kakabhusandi.

Impressed, Ratnakara wishes to be devotee of Rama. So the sages tell him to chant Rama’s name. But Ratnakara’s mind is so polluted by rage and suffering that he cannot pronounce Rama’s name. So they tell him to say, ‘Mara’ which is a pun for both the Buddhist demon of desire and the colloquial word of ‘death’. Ratnakara chants Mara, ma-ra, which eventually reverses itself to become ra-ma, rama, Rama. He chants for so long, sitting so still, that a termite hill (valmik) forms around him, and so when he emerges, everyone calls him Valmiki.

This story of transformation is found in Skanda Purana as well as many regional and folk Ramayanas. It has inspired many popular contemporary plays including the famous Amar Chitra Katha comics on the poet-sage, and teleserials like Upanishad Ganga. The point of this story was to show that how in the bhakti era anyone could benefit from Vedic knowledge, how even a robber could become a sage.

Wait a second, are we referring to one Valmiki or two? Is the poet-sage who gave shelter to Sita and the thief-turned-sage who was given Ram-naam-jaap by sages one and the same person? The two stories come from different eras of Hinduism, the former from the post-Buddhist, Epic Age, and the latter from the Bhakti era. They are separated by 1,500 years. They most probably refer to two totally different people.

While many assume the two are the same, others – especially who see Rishi Valmiki as their patron saint – insist they are two different stories and feel it is insulting to poet-sage Valmiki to be called a reformed thief. What is the truth?

In a world of diverse storytelling, we have to respect the views of the faithful, and avoid the tendency to seek one truth (“my truth is the truth”), especially in matters of faith, that causes hurt to one community. This respect for multiple truths lies at the heart of Hinduism.