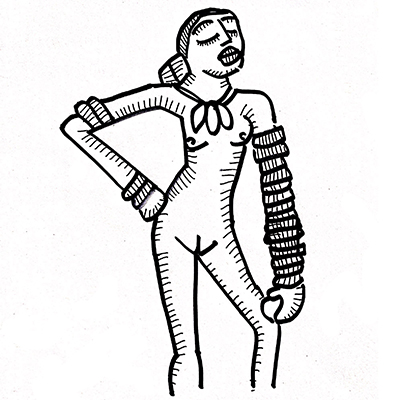 In Mohenjo-daro, archaeologists found a tiny bronze statue of a young naked girl, with bangles in her left hand, standing erect with an attitude, right arm on a hip. Despite no evidence, they declared her to be a ‘dancing girl’ and the name stuck. For the archaeologists in 1926, such a confident stance of a girl, despite being naked, could only indicate an arrogant woman lacking modesty—a courtesan!

Indian history has very few stories about strong, assertive women. We are told about queens like Rani Lakshmibai of Jhansi, Ahilyabai Holkar of Indore, or Rani Abbakka of Ullal. They overshadow housewives, nuns and courtesans, the three categories of women found in traditional literature. But queens were not independent women. They were beneficiaries of circumstance, bound to the men through whom they acquired power. They performed male roles, in the absence of a worthy male.

When we talk of independent women, we rarely talk about nuns or courtesans. Buddhist literature refers to both categories of women, but it is the nun who is glamorised. The courtesan, despite being a donor and patron, was seen as inferior women, as she lived in the world of pleasure, hence delusion. Monastic literature is full of stories where beautiful women become enlightened after realising their beautiful bodies will one day grow old and decay. Tantrik literature describes women who desire sex as fiends and ghouls who wish to steal male energy.

The courtesans of India created India’s music and dance culture, which is now claimed by men, despite ample evidence on temple walls. They are described as either women with loose morals, who needed correction. Or as oppressed women who had to be rescued from men who abused and exploited them. But no one talks about their contribution to the arts and literature, or that most of these women lived independent lives, with independent wealth, that they passed on to their daughters, that they patronised temples and monastic orders, that they even funded the Uprising of 1857, India’s first war of independence.

Their social practices were deemed pitiful by European missionaries, because ‘they could not marry’. And so to mainstream them, in Victorian times, various legal measures were used to get them to marry. Basically, they had to take the surnames of their husbands, which is what civilised women do, and let men manage their property. With marriage, property could only be passed on through husbands to sons. Ancient temples were managed by dancers and priests, but these laws purged the ‘impure’ women and helped the ‘pure’ men get full control.

How many feminists today will demand that stories of courtesans be included in school curricula? We debate stories of murderers and rapists with relish, and moral outrage. But we shy away from talking about independent dancing girls. In saving these women from patriarchal excesses, social reformers wiped out their legacy and autonomy. Even today, an independent woman is expected to be nun-like or faithful to a single man or a single cause or profession. That a woman could live a perfectly happy and prosperous life, which many did, with multiple lovers, without being a sex worker, or a ‘slut’ is a possibility we do not want to consider, document or share with our children. Like the archaeologists at Mohenjo-daro, we still want to control women with labels.