The Context of the Mahabharata 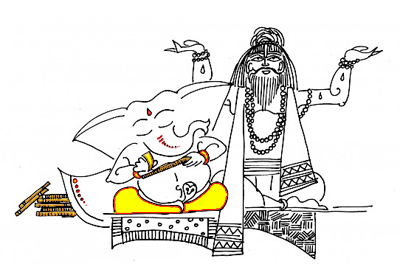 Most Indians believe that one should not read the Mahabharata inside one’s house. But one can read the Ramayana. Reading the former invites strife, the latter brings harmony. This belief is a kind of  ‘imitative magic’: the ability of stories, symbols and rituals to influence the surroundings. Like creates like. The same principle that is followed by Feng Shui. And even certain schools of modern interior decoration, which believe that the colour of the walls and the content of paintings influence the mood of people in the room.

Mahabharata is the story of a family feud that ultimately leads to division of property and a terrible war. Ramayana narrates the tale of a family that struggles, and triumphs, over forces that seek to divide it. Quite naturally, a traditional Indian family terrified of any disruption of the family fabric prefers Ramayana over the Mahabharata. As I write these lines I wonder if Dhirubhai Ambani let the Mahabharata be read in his house or was the division of the Reliance Empire between his two sons simply the natural way forward. Man struggles to keep things together. Yet everything falls apart. Is the collapse of unity and order nature’s way? Is the aspiration for unity and cohesion merely a cultural dream? Is Mahabharata an expression of reality and Ramayana the imagination of a poet? Most people think so. Ramayana is too idealistic; Mahabharata is more realistic, they say.

There is no denying that Mahabharata is a more complex, hence more challenging, epic. It is a maze of stories and personalities. No one is truly good or bad. Even Krishna, who is identified as God, plays an ambiguous role in the epic. Characters in the Ramayana seem more one-dimensional; Rama is perfection personified, too good to be true, while Ravana is evil incarnate.

But it is not so easy to dismiss the Ramayana. Any study of the Mahabharata, necessitates a reading of the Ramayana. The two epics are two sides of the same coin. Both are tales of Vishnu’s incarnations. In one, the Ramayana, he is the rule keeper. In the other, the Mahabharata, he is the rule maker. In the one, he is king. In the other, he is kingmaker. In one, he is predictable and dependable. In the other, he is manipulative and mercurial. Yet both are concerned about dharma – social order. In both, desire is the disruptive force. Both Rama and Krishna triumph, but each one pays a price: Rama has to abandon the innocent Sita under social pressure while Krishna has to watch his children kill each other.

Deconstruction of the two epics reveals that the two epics complement each other. They are part of a grand ‘Vedic’ continuum. Being constituents of Vaishnava literature,they must be seen within the context of Vaishnava world-affirming philosophy and hence must be contrasted from the Shaiva world-denying philosophy. Vaishnava and Shaiva literature, in turn, must be contrasted from Shakta or Goddess literature. The former discuss responses to the challenge of life while the latter focuses on the nature of the challenge that is life. Together, the Vaishnava, Shaiva and Shakta worldviews are narrative expressions of a wider thought process, whose principles are rooted in the Vedas and germinated in the Upanishads. Any attempt to study the Mahabharata in isolation is to understand only a part of a grand puzzle.

Rather than ‘Vedic’ worldview, one may choose the term ‘Indian’ because similar ideas can be found in Buddhist and Jain scriptures. The idea of karma, or influence of past deeds on the present, for example, is an important element of Ramayana and Mahabahrata and Buddhist and Jain stories. Jains, for example, have their own version of the Ramayana and Mahabharata. Rama of the Jains does not kill Ravana for he embraces non-violence. Krishna of the Jains does embrace violence hence can become a Jain Tirthankara only in his next life when the new cycle of life begins. Likewise, Buddhists refer to Bodhisattvas who direct man in the right path much like the avatars of Vishnu.

The Bhagavata, the holiest of Vaishnava literature, attempts to weave the Mahabharata with the Ramayana. Not only do the protagonists, Rama and Krishna, have a common root in Vishnu, the antagonists Ravana and Kumbhakarna of the Ramayana and Shishupala and Dantavakra of the Mahabharata are incarnations of Vishnu’s doorkeepers, living out a curse until it is time to return home.

Devi Bhagavata, the Shakta literature, presents Sita and Draupadi as forms of the Goddess. Sita and Draupadi are the heroines of the epics. Sita is the wife of Rama, Draupadi is the common wife of the five Pandavas. She is a friend of Krishna. As Goddess she can only be a wife of a king. Rama is the great king, capable of taking care of her alone. The Pandavas are lesser kings, unable to take care of her collectively, hence needing Krishna. In both epics, the unbinding of the heroine’s hair is associated with the collapse of order. Sita’s hair becomes loose when she is abducted and Draupadi’s hair becomes loose after she is gambled away by her husbands. Sita is rescued but is forced to leave the kingdom by Rama’s subjects who reject a queen of soiled reputation. Draupadi has her revenge, washes her hair with the blood of her abusers, the Kauravas, and ties it with their entrails, but loses all her children in the great war.

Hanuman, the monkey-god, is the only character to participate in both epics. In both he leads the heroes to victory, by participation in the Ramayana and by presence (on Arjuna’s banner) in the Mahabharata.

Author of both epics participate in the epics, thus informing readers that the tales are not fantasies, they are reports. ‘This is how it happened’ – the root of the word ‘itihasa’ that refers to the Ramayana and the Mahabharata. Valmiki, a reformed thief, gives shelter to Sita after she is abandoned by Rama. In his hermitage are born Rama’s sons who narrate the Ramayana for the first time during a yagna conducted by Rama. Author of the Mahabharata is Vyasa, a child of illicit union. His father, Parasara, makes love to a fisher-woman called Matsyavati, later known as Satyavati, while she is ferrying him across a river. His original name is Krishna Dwaipayana or the ‘dark-one-born-on-a-river-island’. He is very much part of the Mahabharata because he is the biological father of Pandu and Dhritarashtra, hence grandfather of the Pandavas and Kauravas. His epic is also narrated for the first time during a yagna, conducted by the great grandson of the Pandavas, Janamajeya, son of Parikshita, who is the son of Abhimanyu, who is the son of Arjuna and Krishna’s sister, Subhadra.

It is said that all Vedic stories, including the Ramayana and the Mahabharata, was lost to the world until Vyasa compiled it together. Vyasa means compiler. He compiled the lost Veda. He then compiled the lost stories of gods, kings and sages chronicled in the Puranas. Vyasa is thus the common thread through all Indian philosophies and stories. Ganesha, god of beginnings and remover of obstacles, served as Vyasa’s scribe for the Mahabharata, thus giving his epic a divine stamp.

It is said that the Ramayana was first written not by man, but by a god, by Hanuman. When Valmiki read Hanuman’s retelling, he wept. “It is so beautiful and so much better than mine” said he. Hanuman had scratched out his version on banana leaves. When he saw Valmiki weep, he ate these leaves. His version was lost to the world forever. Why did you do that? asked Valmiki. Because, my dear Valmiki, said Hanuman, You wrote the Ramayana to be remembered by your readers. I wrote the Ramayana to remember Rama. This is the Vedic way – to let the narrative be greater than the narrator so that it directs the soul of the listener to the eternal principles governing life, principles the ancients called sanatana dharma.

This article is also listed under Mahabharata, Shiva, Vishnu