The Constructions of Holy Books 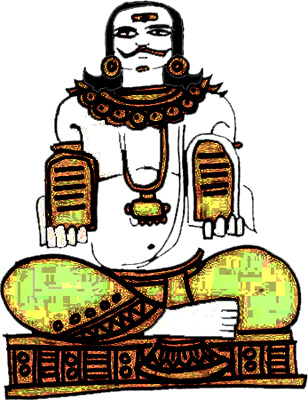 Today the average Hindu believes that Bhagavad Gita is the holy book of Hinduism and Manu-smriti is the legal book that shaped Indian society before the British and the Muslims. The Bhagavad Gita is often presented with great pride while Manu-smriti argued with great shame. Both beliefs, unfortunately, are constructions, as a result of work done by the British, especially Orientalists, who were determined to homogenize Hinduism so as to simplify their governance of the Indian subcontinent.

The European mind that encountered India was comfortable with unity and homogeneity. Despite all differences between the various nation sates (British, French, Portuguese, Germans, Dutch, Spanish, Italians), all Europeans agreed on one thing — that the Bible was the holy book of Christianity. It is what shaped Europe following the collapse of Rome a thousand years earlier. This same European mind was exposed to two other religions, Islam and Judaism, each of which also had a single book, Koran and Tanakh. All three had a single God, all three had a prophet (Jesus or Muhammad or Moses), all three believed in one life, all three believed in covenants (either by circumcision in case of Judaism and Islam or by baptism in case of Christianity), all three believed in Sabbaths (Sunday or Friday or Saturday). So naturally, the Europeans were fairly convinced what religion should be. And those who argued against the Church in favor of rational thought, also believed in an common thread that bound the universe. Such a mind could not grasp, and certainly could not empathize with, diversity.

The 17th century colonizers of India, the Portuguese who traded along the Western coast of India, simply held the natives in disdain and brutally converted the locals into Christianity. But the 18th century colonizers, the British and the French, were fascinated by the wonders of the East. They were convinced that there was wisdom here waiting to be unraveled. This search for Eastern wisdom was spearheaded by a bunch of enthusiastic scholars who later came to be known as the Orientalists. They were convinced that there was a common unifying foundation under the apparent chaos of India. One can argue these Orientalists were responsible for creating the now famous catchphrase, ‘unity in diversity’.  This journey to philosophically unite India began with the Ezour Veda.

The 18th century saw a book doing the rounds in Paris that claimed to be a French translation of an ancient Sanskrit Manuscript. Named, Ezour Veda (Yajur Veda?), it was cherished by the likes of Voltaire, the great French philosopher. In it, there is a conversation between two Brahmins, a polytheist and a monotheist, and in the course of the conversation the monotheist triumphs. Thus the book demonstrated beyond all doubt that ‘pristine Hinduism’ despite popular prejudices was at heart aligned to Christian truth. The book turned out to be a hoax! It was in all probability the work of a 17th century Jesuit priest who wrote the book to persuade Brahmins to convert to Christianity.

When the British introduced their legal system of courts and lawyers in India, they wondered by what law were Indians governed. In villages, the legal system that existed was that of the panchayat, that depended not on a text but on the wisdom, or lack of it, of the elders of the village. The British legal system simply ignored this indigenous system of jurisprudence because the panchayats did not follow a standardized written code. They believed a civilization ought to have a standard written code. This was a Protestant bias. But they found none in India. So they went looking for one.

That search led William Jones to a classical Sanskrit text called the Manu-smriti. William Jones, an 18th century Judge of the Calcutta High Court, translated it and made it the basis of many laws that the British came up with to govern Indians. These laws were later adopted by the founding fathers of India. These laws today determine the personal Hindu law related to marriage and divorce and inheritance and adoption and legitimacy.

Such has been the power of this book that people assume that in ancient and medieval India, Brahmins referred to the Manu Smriti just as today’s lawyers refer to the Indian Penal Code. Naturally, this book and its contents have been vociferously condemned by Dalits and feminists while celebrated by numerous scholars, both European and Indian, who were relieved that Hinduism was not so fragmented after all.  In reality, Manu-smriti, the book, was for early and medieval Indians not really a book but an idea.

In mythology, Manu is the father of mankind, not as Adam was for the Christians, Muslims and Jewish people, but in a more metaphysical sense. The proper noun Manu and the common noun Manava are derived from manas, which means imagination. Manu and the Manavas thus possess imagination that makes them human. Manu is said to have come up, after consulting with his father Brahma, codes of conduct for humans. But these codes were flexible, changing with space and time, with the various yugas, which is why the code of conduct of Ram (one wife only, for example) is so different from the code of conduct of Krishna (many wives, for example). But this was not seen or considered by the British. They took things literally. They saw Manu-smriti as the closest Hindus had to the commandments. Eventually, they hoped the Hindus would come into the faith; until then Manu-smriti had to do.

The work of William Jones was considered so invaluable that his statue holding the Manusmriti can still be seen in St. Paul’s church in London. That a British Church houses both Manusmriti and the man who presented it to the world, neither of whom are housed in any Indian temple, says a lot about the British and Indian approaches to the manuscript.

Later, post 1857, when missionary activities were not actively encouraged, the British made no attempt to shift all Indians to a common code — the commandments (created by the British) were accepted as those of the Hindus, and treated with utmost deference, a deference that Indians eventually and inadvertently inherited.

In British courts, the Bible was used to compel witnesses to speak the truth. When the law courts came to India, judges wondered what would compel Hindu witnesses to speak the truth. There was no Hindu equivalent of the Bible. The water of the holy Ganga was tried. But it did not stop perjury. This was when Bhagavad Gita, first translated in the 18th century by Charles Wilkins, came to the rescue. It was the first holy Hindu book to be genuinely translated.

Before this translation, in all probability, very few Indians had actually read the Bhagavad Gita. Yes, everyone knew the Mahabharata and knew of Krishna’s conversation with a despondent Arjuna, but they knew the stories, not the original text which was written in a language known only to the Brahmin elite. Numerous commentaries on the Bhagavad Gita had been written long before the British. And most were in Sanskrit. These included the works of Shankara, Ramanuja, Madhava, Vallabha, Nimbarka and Chaitanya, who were later bunched together as the Vedanta gurus.

In the 13th century, a young boy called Dyaneshwar wrote a commentary on the Bhagavad Gita in a regional language, Marathi. This act horrified the Brahmins who believed that the voice of God could not be presented in any other language but Sanskrit. Thanks to radical thinkers like Dyaneshwar the wisdom of the Bhagavad Gita was familiar to most Hindus through regional songs and stories that spoke of karma and dharma and atma and moksha. But few had actually read the 18 chapters of the treatise as we do today.

The Bhagavad Gita as we know it today is a direct result of the work of Orientalists. It was their translations that were read by Mahatma Gandhi and Pandit Nehru. Since then, the book has been translated several hundred times, and commentaries written on it, not just by Europeans but also Indians, in all Indian languages. All this happened only in the past 250 years. And so, today, Hindus can proudly claim that they have a unifying holy book, an imperative imposed on Hindus by the European gaze.

In our haste to make Bhagavad Gita the holiest of holy books of the Hindus, many forget that Bhagavad Gita is a Vaishanva document; Krishna who sings the song is an incarnation of Vishnu. For Hindus, God presented the same truth in different ways. The same wisdom is captured in Guru Gita, part of the Skanda Purana, and in Ganesh Gita and in Yoga Vasistha and in Isha Upanishad. None of these are as popular as the Bhagavad Gita, perhaps because the Orientalists never gave them the same pride of place for fear of once again cluttering their understanding of Hinduism. One comprehensive book was good enough.

The modern cosmopolitan urban Hindu often overlooks this history and these divisions perhaps because it is so much convenient to ‘unify the diversity’ of Hinduism through one book. This is the insidious power of what we now call Westernization — it makes us intolerant to diversity.

This article is also listed under Modern Mythmaking