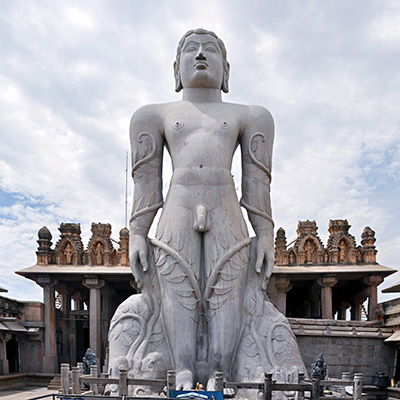 In the state of Karnataka, about 150 km from Bengaluru, in the district of Hassan, stands Shravanabelagola, where there is a lake, known as white (bili) lake (gola), that gives the settlement its name, and two stone mountains, Chandragiri and Vindhyagiri, associated with the founder of the ancient Mauryan dynasty, Chandragupta.

Most people have heard stories of how the shrewd brahmin, Chanakya, enabled Chandragupta to raise an army, overthrow Nanda, establish the Mauryan empire with its capital in Pataliputra and kept Alexander’s Greek army at bay. But not many have heard of Chandragupta’s spiritual guru, a Jain monk called Bhadrabahu. Following a great drought, Chandragupta lost interest in worldly matters, and passing on the throne to his son, Bindusara, he became a Jain monk and moved to the south, to the stone hills of Karnataka which came to be named Chandragiri after him. Here, Bhadrabahu, and later, Chandragupta, performed Sallekhana, the act of ritually abandoning all food as one draws to the end of one’s life, and thus voluntarily letting go of the mortal body, which is the ultimate act of renunciation in Jainism. This happened 2300 years ago. And so on Chandragiri hill, we have a cave dedicated to Bhadrabahu and a basadi (Jain temple) in honour of the late Mauryan emperor, as well as many other shrines built for the various Jain Tirthankaras, as well as the yakshas and yakshinis that guard them.

On the opposite hill, Vindhyagiri, is one of the world’s tallest freestanding statue, the 57 feet tall Gomateshwara Bahubali, which is bathed every twelve years with milk and scented water. This image was carved about a thousand years ago for Chavundaraya on the request of his mother. Chavundaraya was military commander of the Western Gangas who were feudatories to the Rashtrakuta kings. He played a key role in establishing the Ganga dynasty. He was an influential figure in medieval Karnataka history, and a patron of literature, who composed some of the earliest available literature in Kannada.

It is important to remember what ‘1000 years ago’ means: it is the time when the regional languages and scripts of India were just emerging, when Islam had not impacted life in India, when Shankaracharya had written his commentary on Vedanta, but not Ramanuja, or Madhwa. The Tamil Alwar and Nayanar poetry was just being composed, the Bhakti movement was just emerging, and much of South India was under the influence of Jain, and Buddhist, doctrine.

The story of Bahubali was very popular in this time. We find retellings of his saga in Sanskrit as well as Kannada. In Jain mythology, the world has no beginning or end. It goes through waves of fortune (utasarpini) and misfortune (avasarpini). In each of these waves, there are twenty-four great sages (Tirthankaras) and twelve great kings (Chakravartis). Rishabhanatha was the first Tirthankara of the current wave. He was a great king, and had a hundred sons, to whom he gave a hundred kingdoms, before he renounced the material world. To his two daughters, Brahmi and Sundari, he gave the art of writing and counting.

His eldest son, Bharata, was destined to be Chakravarti, the ruler of the whole world. This meant his brothers had to accept him as their overlord. Rather than do that, his brothers renounced their kingdoms and became monks, all except Bahubali. So Bharata declared war on Bahubali. To prevent unnecessary bloodshed, it was decided that the two brothers would engage in a duel and sort matters between them (a lesson war-mongering politicians of today can surely take). In these duels, Bahubali emerged winner.

He was about to strike Bharata with his fist when he suddenly experienced a moment of acute self-awareness: how could he strike his own elder brother? Why? He decided to renounce the world, and become a monk like his other brothers, but that would mean he would have to bow to them in the monastery, even though they were younger than him, because they became monks before him and so were now senior monks. He did not want to bow to anyone. He wanted to renounce the whole world, but how could he renounce the ground on which he stood, the ground that was now under the control of Bharata?

Bahubali had raised his hand to strike Bharata. Instead he used that hand to pluck out his hair, thus declaring to the world that he had renounced his crown and his kingdom. He stood upright in one place, not moving, refusing to take any more space than required. He shut his eyes and immersed himself in meditation. His clothes fell off his body, but he did not open his eyes. Ants and serpents climbed his body, but he did not open his eyes. Creepers grew around his feet, but he did not open his eyes. Everybody was amazed by this great sage. They all came and bowed to him, everyone, even Bharata and his brothers. Finally the sisters came, but they noticed that though meditation and austerity had granted Bahubali great wisdom, he was a step away from all wisdom. ‘Get off the elephant,’ they said. Hearing their words, the last obstacle was removed, for Bahubali realised his ego prevented him from entering the realm of the wisest of the wise, the ego that stopped him from bowing to Bharata as a king, the ego that stopped him from bowing to his other brothers as a monk, that ego that prevented him from standing on land that belonged to another. Bahubali did as his sister’s instructed and became one of the most revered Jain sages, his image with creepers around his feet representing all the fetters that bind us to this earth and prevent us from rising.