The Art of Constructing Demons 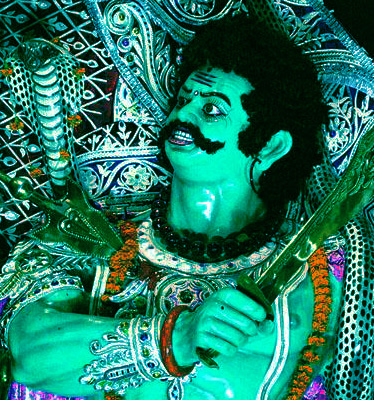 If there was no Mahish-asura, the gods would not have invoked the warrior-goddess, Durga. If there was no Tarak-asura, there would have been no need for the divine warlord, Kartikeya. If there was no Ravana or Kansa, Ram or Krishna would not walk the earth. Demons and villains are an integral part of mythology. Buddhists speak of Mara, demon of desire. In Jainism, there is Prati-vasudeva, villain to the heroic Vasudeva. Greeks had fabulous monsters from the bull-headed Minotaur to the snake-haired Medusa. The Bible is full of the God-rejecting Canaanites, Romans, Babylonians, Assyrians and of course, the Devil.

It is the defeat of the villain that transforms a man into a hero. It is the destruction of the demon that makes a deed noble and divine.That is why ‘demonizing’ cigarettes, alcohol, narcotics and junk food not only makes people healthy, it also grants them the moral high ground. That is why ‘demonizing’ plastics and urbanization grants environmentalists a smug superiority. And that is why marketers personify mosquitoes and germs as ‘ugly horned monsters’ in advertisements giving children the chance to be heroic as they pester their parents to buy a particular brand of repellent, toothpaste or antiseptic.
Considering the intense emotions demons evoke, one wonders if ‘constructing demons’ can be a strategic tool of management? Politicians have long used this technique to rouse a mob. Typically, the politicians demonize an outsider, an immigrant, a foreign hand, a stranger, any one the mob is willing to blame for its problems.It has been the favourite tactic used by kings to wage bloodthirsty wars against neighbouring lands. Just brand the opponent as ‘evil’, and before you know it even an imperialist ambition starts being perceived as a holy crusade.

The art of constructing demons stems from an understanding that demons are not natural phenomena. They are artificial constructions, created through clever storytelling, as in the case of Shakuni.

In the Mahabharata, Shakuni is the maternal uncle of the Kauravas. On his advice, his nephews invited their cousins, the Pandavas, to a gambling match and instigated them to wager all their wealth. Playing for the Kauravas, Shakuni threw the die so skilfully that he won every game and laid claim to all that the Pandavas possessed. Later, on his advise, the Kauravas refused to return even a needlepoint of Pandava property, even if it meant war. This makes Shakuni the great villain of the epic, one who deserves no mercy.

What follows now is a little known story based on the Mahabharata found in Andhra Pradesh. Before Gandhari, mother of the Kauravas, married Dhritarashtra of the Kuru clan, she had been — on the advice of astrologers, to avert a calamity — ‘married’ to a goat and the ‘husband’ had been sacrificed promptly thereafter. Technically, this made Gandhari a widow and Dhritarashtra her second husband. Fearing a scandal if this information became public, the elders of the Kuru clan put Gandhari’s entire family under house arrest. They were served just one fistful of rice every day. Realizing that this was an elaborate plan to starve them to death, Gandhari’s father declared that none but his youngest son would eat the sparse food being served, so that at least one amongst them would survive to avenge the death of the rest. This youngest survivor of Gandhari’s family was Shakuni. He swore vengeance. He used the knuckle bones of his father and dead brothers to make the dice with which he was able to defeat the Pandavas in the gambling match, a victory that eventually led to the war at Kurukshetra in which the entire Kuru clan was annihilated.

This folk story transforms the villain of the Sanskrit epic into a victim and an avenging angel. So who is Shakuni — a hero or villain? It all depends on the story we are told, and stories we choose to believe.

During all his departmental meetings, Ravi has been hearing stories of Jaideep, head of another department. He has been hearing how cunning Jaideep is, how he exploits his team, undercuts the competition, manipulates the figures, poaches the best candidates, takes credit for other people’s work, does not share his contacts, pulls people down during evaluations, and uses his political connections to get his way in the industry. In the past eight months, Ravi has come to believe that Jaideep is indeed a horrible man, someone he must stay away from.

So it was quite a surprise for Ravi when he actually met Jaideep during the National Conference. During their interactions, Jaideep came across as a very gracious soft spoken man. “Don’t be fooled by his table manners,” warned one of Ravi’s friends during the tea break. This confused Ravi. He realized that everything that he had heard about Jaidep was negative, yet his own interaction, and his own gut feel was positive. So is Jaideep really the demon every body claims he is, is a wolf in sheep’s clothing perhaps, or is that all propaganda? Ravi does not know whom to believe because all he has is stories.

We live in a world of stories. Some stories create heroes, others villains. Some sprout horns, some bestow halos. Few have a 360 degree view of the world. A master strategist knows this. Hence he exploits the art of selective story telling to transform all his competitors and hurdles into monsters.

People are eager to believe in monsters and thoughtlessly destroy them because monsters provoke the most primal of emotions, bypassing all rational thought. They trigger our deepest fears, threatening our well-being, making us so insecure that we refuse to invest any time or energy in trying to understand them or reason with them. Who knows what Mahish-asura or Tarak-asura actually did that they had to be killed? No body bothers about details. Demons are pre-judged. They exist to be destroyed. In fact, we consider any attempt to argue their case as treason or blasphemy. Fear of demons, hatred of villains, unites us, organizes us, empowers us to direct every ounce of our energies towards destroying the monster with extreme prejudice. That is why, however unethical it may seem, ‘constructing demons’ is and always will be a powerful arrow in the strategy quiver.