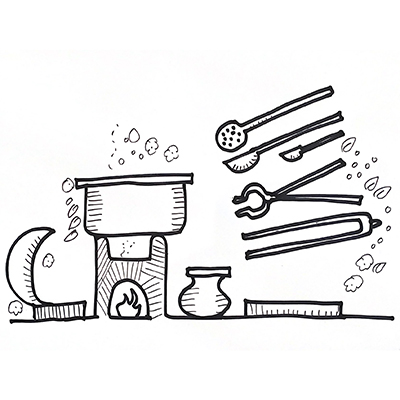 An Indian kitchen is a sacred place. Many people do not take footwear into the kitchen. They insist on taking a bath before commencing the activity of cooking. This reminds us that a kitchen is an auspicious place. In the Vedic period, three fires were often lit by the household members. The first was the Grihapatya fires meant for household duties, managed by women in the kitchen. The second was the Ahavaniya fires kept in the eastern direction to invoke the god. The third was the Dakshinagni fires. This was kept in the southern direction to invoke the ancestors.

Indian kitchens have utensils indigenous to the subcontinent. The ‘thali’ with the rim on the edge, which prevents liquids from falling, is a unique Indian invention. It has also been found in the Harappan civilization. So has the ‘handi’, the cooking pot with a rim, and no handle. The use of banana leaves and various other leaves as plates is again distinctive to India, as the bowl and chopsticks are to China, and cutlery to Europe. Throwing used plates made of leaves and clay was common practice in ancient times. Feeding people on broken potsherds was seen as an insult.

Another great Indian kitchen invention is the ‘lota’ or the Indian Pot. It has to be distinguished from the Greek ‘amphora’ and the Persian ‘surai’, which were more vertically aligned; while the centre of gravity in the lota is more central. It has a rim that enables it to be held, and a flat clear base so that it can sit on the ground. It is used for carrying water for ablution, washing as well as for cooking. It is often an object of worship, topped with a banana, coconut or the face of a deity, containing leaves and flowers. This transforms it into a temporary shrine.

Another exclusive characteristic of the Indian kitchen is the cutting instrument: either a sickle or a knife. There are some special iron knives that are held by the feet, known as a ‘boti’ in Bengali or ‘paniki’ in Odia. They simplify the cutting of fruits and vegetables and even fish while sitting on the ground.

Various kinds of spoons are part of the Indian kitchen, right from the Vedic Period. Dharani was used to pour ghee in the fire. Similarly, there are different spoons used to add spices, cook, and serve. For eating food, fingers were used, not utensils. The use of cutlery came with the British. Indian casseroles do not have a handle. So, this makes it pivotal to have a ‘karchi’ or a ‘pakkad’ to hold hot vessels. Many women prefer to use cloth for this purpose. The ‘pakkad’ thus becomes a vessel peculiar to the Indian kitchen. So is the ‘chimta’ for holding light chappatis, not used in tandoor cooking of Central Asia.

The ‘thali’, the ‘handi’, the ‘lota’, the ‘pakkad’ and the ‘paniki’ are unique to the Indian kitchen, inventions by Indian women, who remain nameless.