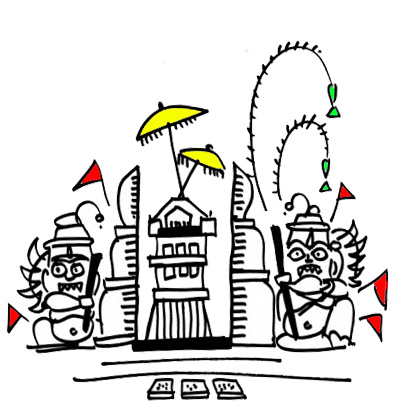 As you walk through the streets of Bali, an island in Indonesia, you cannot miss the temples in every street, in every house, in every shop, and the thousands of tiny baskets of palm leaf containing flower and food (including sometimes a biscuit and menthol) and incense placed on the roads as offerings to invisible gods.

I say invisible because this is one of the most striking differences between Balinese Hinduism and Indian Hinduism. In Bali, the temples are full of tiny shrines, each with a seat located high above a pillar or tower, but the seat has no deity. The temple has arches, courtyards, doorways, images of fierce guardian gods, and doorkeepers, but no god or goddess, just empty thrones. These gods are invisible, residing in the sky or the mountain or the ocean, and they come when invoked to receive offerings made by the people of Bali. In exchange they give good luck, harmony and blessings.

Hinduism came to Bali over a thousand years ago via seafaring traders, followers of Buddhism and various Tantrik and Vedic Hindu traditions, who travelled the sea from the East coast of India. Memories of this are still retained in the form of the festival of Bali Jatra in Orissa during which tiny paper boats with lamps are set afloat on the River Mahanadi in the month of Kartik, post Diwali.

The similarities in rituals and script and dance and stories of Bali with those in Tibet, Nepal, Manipur, Orissa, Bengal and Tamil Nadu are striking. On walls you see words like ‘Om Shanti Shanti Shanti Om’ and ‘Om Su-asti-asto’. Priests speak of rituals such as Agnihotra and chant the Gayatri mantra. There are Brahmins here and Kshatriyas and Vaisyas and Sudras, without the dark side of caste system so prevalent in India. And men — even cool looking bartenders in swanky hotels — very casually wear Champa and Hibiscus flowers tucked against their ears, which is rather cute.

The story goes that exactly a thousand years ago, in 1011, a great conference took place not far from the city of Ubud, where under the supervision of the king Udayan, wise men sat together to unite and synchronize the various branches of local and imported beliefs and customs. It was agreed that every household, and every village and every province would have temples dedicated to cosmic, hilly, oceanic, forest and local gods. The first to be invoked would be the Trimurti: the creator Brahma, the preserver Vishnu and the destroyer, Shiva.

While Hinduism of India is marked by bhakti or passionate devotion, which swept across India in the 14th century AD, Balinese Hinduism is more ritualistic and is about aligning, through rituals, space and time and people (desa, kala and patra, as they say, reminding once again of ancient links with India). This is what the priests do as they sprinkle water with grass and move from shrine to shrine, channelizing the energy of the earth and the sky for the benefit of the people.

It makes you wonder — what exactly is Hinduism? Is it the rituals, is it the stories, is it the devotion, or is it the gods of the Puranas or adherence to ideas found in Vedas and Tantras? One cannot answer the question. Perhaps it is this absence of doctrine and dogma which makes Bali famous for its tolerance and hospitality and gentleness.