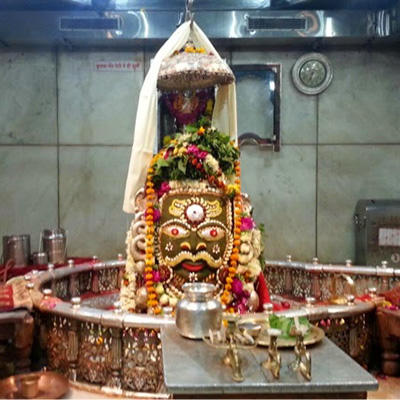 The city of Ujjain with 84 shrines dedicated to the destroyer, ultimately venerates the unending cycle of life and the immortality of the soul.

Typically, deities in Hindu temples face the rising sun. However, in Ujjain, the presiding deity, Shiva, known locally as Mahakaleshwar, faces south, which in Hindu mythosphere is the direction associated with death. There flows the river Vaitarni, beyond which is located Pitr-loka, the land of the ancestors. Shiva looks at them and offers hope of another life, for he is the lord of time, Mahakal, and the conqueror of death, Mrityunjaya.

In Hinduism, death is conquered in two ways: immortality and rebirth. Liberation happens when we discover the immortal soul enjoying the many rebirths of the flesh. In Shaivite iconography, the Shiva-linga represents the immortal timeless soul. The water dripping on it represents the re-dying and rebirthing flesh in the river of time.

The temple of Mahakaleshwar at Ujjain is listed as one of the 12 Jyotirlingas by Adi-Shankaracharya, the 8th century Vedanta scholar. In these spots, Shiva appeared as a pillar of fire on his own (swayambhu linga). Such Shiva temples are distinguished from those set up by human hands (sthapitha linga).

But Mahakaleshwara is not the only Shiva temple of Ujjain. Nearby is the Kal Bhairav temple. In fact the city has 84 Shiva temples, and even a Shakti-peetha – the Hara-Siddhi Mahakali temple of the Goddess, indicating its strong association with Shaivism.

Ujjain was once known as Mahakalavana, or the ‘forest of Shiva’, through which passed the Dakshina-patha, a highway that connected the northern plains with the Deccan plateau. Shiva wandered in this forest as he sought someone who, or something that, would help him get rid of the fifth head of Brahma that clung stubbornly to his palm – he had wrenched it after he got enraged by Brahma’s arrogance. Shiva also wandered here as he carried the charred remains of his wife, Sita. In both cases, a dip in the river Kshipra liberated him, in the first case liberation from rage and in the second case liberation from sorrow. The river is said to be the blood that spurted out after an angry, or sorrowful, Shiva struck Vishnu’s forehead, or finger, with his trident. Bathing in the river Kshipra to cleanse the flesh and soul remains an essential part of a visit to Ujjain.

Ujjain was once known as Avanti and references to this being a great city are found right from Vedic and Buddhist times. It is associated with the poet Kalidasa, the playwrights Bhasa and Shudraka, who contributed greatly to Sanskrit literature. It is the legendary city of the mystic Bhartrihari and his brother, the king Vikramaditya, whose stories remind us of the cyclical nature of time that forms the cornerstone of Hinduism.

Bhartrihari’s tryst with flesh and soul came through heartbreak. He was deeply in love with his wife, but discovered that she loved the stable keeper, who in turn truly loved a sweeper lady. Heartbroken yet unable to control his desires, he developed a split personality. He became a disenchanted hermit who wrote spiritual poetry in the waning half of the moon and an enchanted householder who wrote sensual poetry in the waxing half of the moon. Eventually he became a Nath-Jogi, and his cave is found in the vicinity of Ujjain, as is the shrine of his guru, Matsyendranath, who is revered as a Pir by Muslims.

In the case of Vikramaditya, understanding of life’s repetitive nature emerged from his tryst with vetal, or the ghost, that he was asked to fetch from a crematorium. While catching vetal was easy, holding on to them was tough as one had to resist the urge to speak to them. But the ghost determined to escape would always tell Vikramaditya a story and ask him to judge a case. ‘If you are truly Vikramaditya, you will give a sound judgement. If you are an imposter, you will stay silent.’ The proud Vikramaditya would not be able to keep his mouth shut and so the ghost managed to give him the slip twenty four times. On the twenty fifth attempt, Vikramaditya had no answer to give and so stayed silent. ‘The silence you are so proud of will cost you dear,’ chuckled the ghost, who then revealed how the sorcerer who had asked Vikramaditya to fetch the vetal planned to use the ghost to usurp Vikramaditya’s throne. The repetitive nature of the twenty five stories of the vetal reminds us of the cyclical nature of life and the dangers of attempting to break the cycle.

In the folklore of Ujjain, it is from the crematorium where Vikramaditya found the vetal that ash is collected for rituals of the Mahakaleshwar temple. Every morning at 4 am, the Shiva-linga is offered bhasma-aarti, a ritual that is conducted by male priests behind closed doors. Women – who are symbolically associated with life and rebirth – are excluded from this ritual that symbolically celebrates the reality of death. Traditionally, the ash would be collected from the pyre of a freshly cremated corpse, and offered by an aghori sanyasi. Today, though the ritual is more sanitised and the ash of burnt cow dung is offered instead, perhaps an attempt to alter the ritual to suit modern (or puritanical) sensibilities. This tension between bright, cheerful Vedic Hinduism and the dark undercurrent known as Tantrik Hinduism is an ancient one. Shiva of the former school receives milk and cow dung ash. Shiva of the latter school receives ash and bones from the crematorium.

The original Mahakaleshwar temple was located in Mahakalavana. This was raided and plundered in the 13th century by the Delhi Sultan, Iltamush, father of Razia Sultan. What remains of the old enclosure is only the gatehouse known as Chaubiskhamba Mandir (temple of 24 pillars) with its doorkeepers, the goddesses Maha-maya and Maha-laya, a reminder of the deep Shiva-Shakti roots of this city. But the temple was reconstructed in the 18th century, under the patronage of the Scindias or Shindes, during the age of the Maratha confederacy. It is they who initiated the Simhastha (the Kumbha Mela of Ujjain) on the banks of the Kshipra, inviting the warrior-ascetics to replicate the gathering that took place every twelve years on the banks of the river Godavari in nearby Nashik. The rulers knew the fundamentals of Hindu philosophy: nothing lasts forever, and everything is reborn.

This article is also listed under Indian Mythology, Pilgrim Nation